IT MAY feel like there is no end to the heat here in Australia, but the opposite is true in the US, where temperatures dropped to -51. 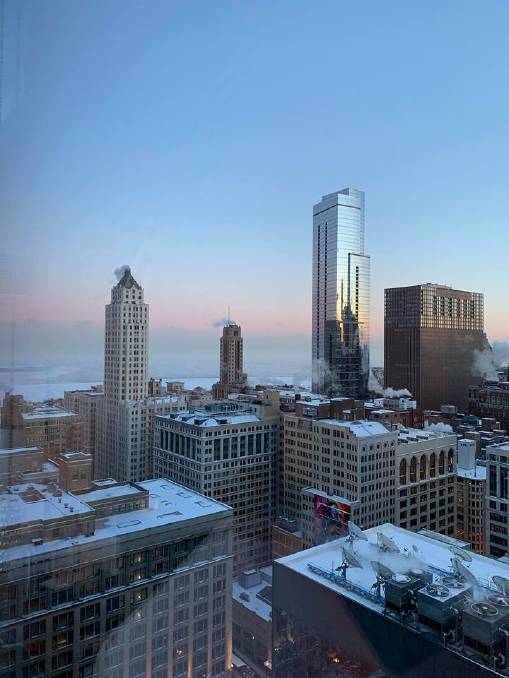 The deceptively calm and peaceful Chicago skyline this week, as temperatures there dipped to -31 degrees. Photo: Victoria Gehrig.

FOR MOST of us sweltering through a record-breaking summer, which has seen maximum temperatures of close to 50 degrees in parts of South Australia, NSW and Victoria, the chance to jet off to somewhere cool has immense appeal.

However, it is very much a case of be careful of what you wish for, as on the other side of the globe there are extremes of another sort.

A freak weather pattern, dubbed a polar vortex, is dragging Arctic air down to the US Midwest, sending temperatures plummeting to as low as -51 celsius.

One person who is seeing both sides of the coin is north-east Victorian product Victoria Gehrig, who has recently commenced work in Chicago.

Prior to taking on her new role, Ms Gehrig was relaxing with family and friends at Yarrawonga on the Murray River during the early January heatwave.

Temperatures then peaked at around 45 degrees in the border town, falling just short of the all time record of 46, so you could forgive Ms Gehrig for wanting a refreshing cool change, however she got more than she bargained for.

“It’s been close to an 80 degree turnaround so it’s fair to say it was a shock to the system,” she said.

Chicago’s fame is as the Windy City, but this week it was moonlighting as the Freezy City, with a new record low of -31 celsius set on Wednesday at O’Hare International Airport.

In the neighbouring Midwest state of Minnesota, the lowest temperature of -51 was recorded.

To put it in perspective, the average domestic freezer works at around -18.

Ms Gehrig reported the polar freeze was a surreal event for an Australian far more used to summer bushfires than winter snowstorms.

“There are warnings out there not to go outside for more than five minutes at a time – you go and the air is so cold it hurts to breath, there is hardly anyone on streets that are normally bustling.

“It is a weird thing to be a part of, especially given just a couple of weeks ago it was so hot in Yarrawonga.

However, the big freeze in the US does not meet stereotypical images of a howling blizzard.

Ms Gehrig said it was strange to think how cold it was outside, as from the inside all looked completely calm.

“It’s sunny out there, there is no real hint of just how much colder than usual it is from the looks of it apart from the steam rising off the lake where the cold air hits the warmer water.”

“However, it is seriously cold out there, Chicago has been colder than the top of Mt Everest or the North Pole this week.

“There’s mobile ‘heating centres’ in buses out on the streets to help the homeless as you just could not stay out there for too long.”

From an agricultural perspective the cold snap is unlikely to have major ramifications, with sufficient snow cover on winter crops in the US and Canada to minimise potential damage.