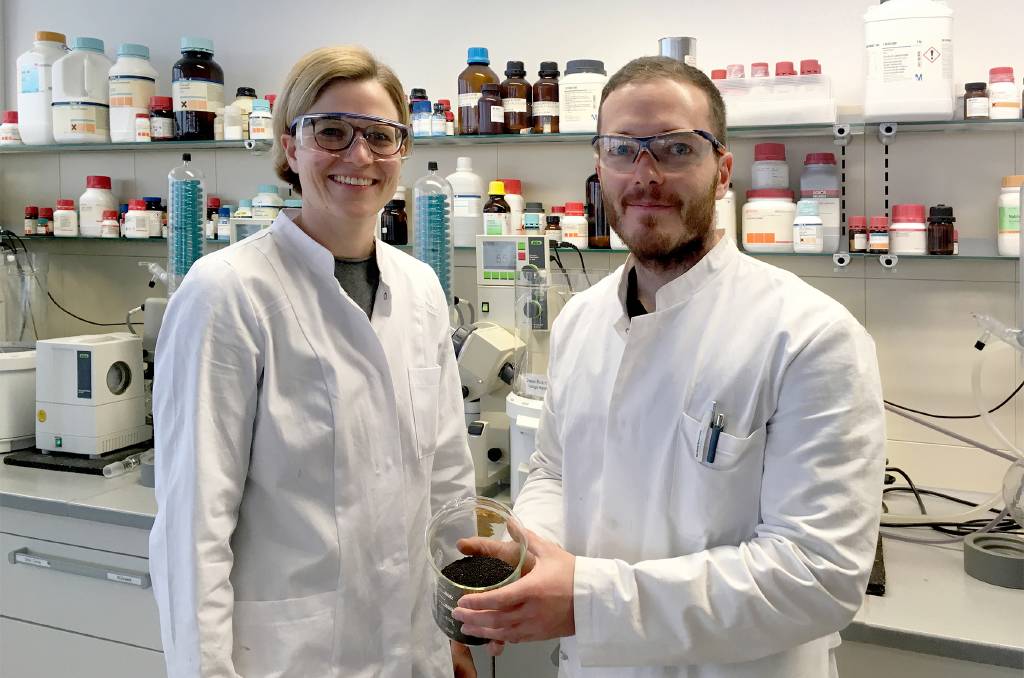 Corinna Dawid and Christoph Hald of the Technical University of Munich are part of a team that has isolated the bitter compound in canola meal.

German researchers have identified the compound that makes canola meal bitter, potentially opening up new markets for the byproduct.

A GERMAN breakthrough may create market opportunities for rapeseed / canola meal, the byproduct of the oil making process.

At present, rapeseed / canola meal is well regarded as a stockfeed, with high levels of protein, but due to bitter compounds it is not palatable for humans.

However a team out of the Technical University of Munich has located the exact compound that create the bitter taste and where it is found in the protein isolates, meaning they hope to be able to make breeding advances that could remove the bitter compounds, leaving a more pleasant tasting meal.

Vegetable-based protein meal for human consumption is big business with the rise in people, especially in affluent nations, on vegan diets.

Citing Food and Agriculture Organization (FAO) research that said the demand for food will approximately double by 2050 due to the growing world population he said there would be opportunities for growth in the plant protein sector.

Dr Hofmann, who heads the Chair of Food Chemistry and Molecular Sensory Science at his university, said growing demands for protein would mean the need for further developments in plant protein sources.

He said rapeseed / canola was a logical starting point, as a plant with good levels of protein that at present did not generally make it into the human consumption food chain.

Added to that, Dr Hofmann said rapeseed was a good choice in terms of the quality of the protein it produces, which is high in a range of essential amino acids.

At present, he said research estimated around 1.12 million tonnes of crude protein was produced as a byproduct of canola / rapeseed oil around the globe, the vast majority of which goes to animals.

Unlocking the bitter taste was a complicated task, with researchers checking three isolates to see their role in contributing to the sharp flavour, eventually finding a compound called kaempferol 3-O was the major culprit.

The first isolate was an extract of all the proteins contained in rapeseed meal.

The second isolate predominantly contained cruciferin, a protein found in many cruciferous plants, and the third napin, found in many brassicas, which are the rapeseed's two main storage proteins.

All three isolates had a protein content of 80 to 90 per cent.

The cruciferin isolate in particular contained a large amount of this bitter substance with 390 milligrams per kilogramme.

The rapeseed meal and napin isolate had less than a tenth of the quantity, but still tasted bitter in the sensory test.

Now the compounds and source protein have been isolated, breeder will be able to work to breed the taste out.

"Since we now know the cause of the bitter off-taste, it is much easier to develop suitable technological processes or breeding strategies that can be used to produce tasty, protein-rich foods from rapeseed," said co-researcher Corinna Dawid, who heads the Phytometabolomics research group at TUM.

It will not be the first time a change in palatability has improved the usage of rapeseed / canola.

Modern breeding removed two undesirable traits in old rapeseed varieties, glucosinolates and erucic acid to create what was then known as canola.

The glucosinolates created bitter flavours in the oil, while the erucic acid is linked to health concerns, such as heart disease.

Now, in Europe, where the oilseed still remains known as rapeseed rather than canola, the varieties grown also have lower levels of both compounds.