Woolworths has bowed to dairy farmer pressure and rising consumer concern about the drought, ending its contentions $1 milk price

Woolworths has bowed to dairy farmer pressure and rising consumer concern about the drought, vowing to lift the price of house brand milk from $1 to 1.10 a litre nationwide, from tomorrow.

The supermarket group will now sell two- and three-litre lines of Woolworths branded fresh milk for $2.20 and $3.30 respectively.

It has promised every cent of the increase will end up with Australian dairy farmers.

More to be done

Agriculture Minister, David Littleproud, welcomed news, but said there was still much more to be done.

“Whilst I wish Woolworths was taking a much bigger step, they’re miles ahead of their competitors and it’s sad it has taken National Party pressure to get to this point,” he said.

“Coles and Aldi continue to sell milk at $1. This drives down prices to farmers.”

We’ve heard the outlook will continue to be extremely tough for dairy farmers right across the country - Brad Banducci, Woolworths

Last year Woolworths introduced a special Drought Relief Milk range selling for $1.10/litre on the eastern seaboard, which was available in addition to its private label lines.

Strong consumer support for the drought levy range has generated about $5.8 million in relief for more than 285 dairy farmers since September.

The drought milk offering will now be disbanded, but as the price change goes national across the Woolworths house brand range, the company said it would deliver higher milk returns to about 450 dairy farmers supplying Woolworths. “In our consultation with industry bodies, including the Australian Dairy Farmers, its state members and NSW Dairy Connect, we’ve heard the outlook will continue to be extremely tough for dairy farmers right across the country,” he said.

“This is affecting milk production and farm viability, which is devastating for farmers and their regional communities.

“It’s clear something needs to change and we want to play a constructive role in making this happen.”

Mr Banducci accepted the modest price lift would not solve broader structural issues, but hoped it would inject much needed confidence into the sector. 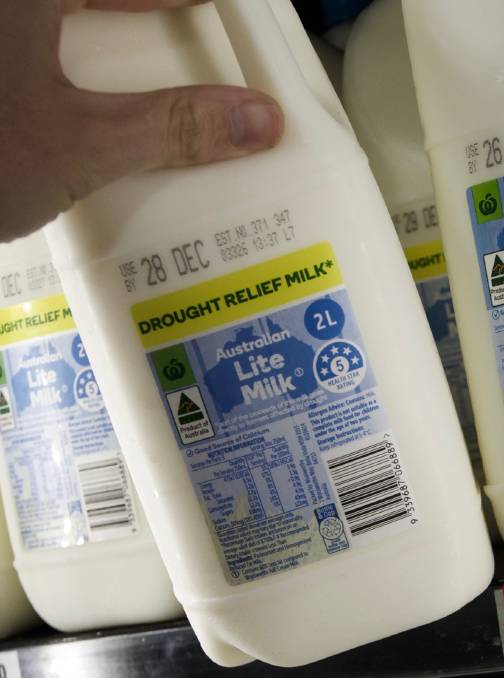 Woolies will remove its Drought Milk Range as the new $1.10 a litre price is introduced across its house brand fresh milk range this week.

CEO David Inall, who joined Mr Banducci for the price change announcement, said ADF and Woolworths had engaged in “constructive discussions” in recent months around the damage wrought on the dairy industry by $1 milk and other discount dairy products.

There is no doubt that this is a game changer in the fight against discount dairy that has long frustrated the industry. - David Inall, Australian Dairy Farmers

“We understand the decision to raise the price of a staple household food item was not easy to make, but it was unquestionably the right one,” he said.

“There is no doubt that this is a game changer in the fight against discount dairy that has long frustrated the industry.

“Woolworths should be applauded for having the courage to phase out its $1 milk line, and it is now time for other retailers to immediately do the same.

“The dairy industry has suffered from the debilitating effects of $1 milk for eight years, since Australia Day 2011.”

The latest national dairy farmer survey found farmer confidence in the future of the dairy industry had plunged from 75 per cent to just 47pc in the past four years.

The survey also showed an alarming 40pc of farmers did not make an operating profit in the 2016-17 financial year.

“Farming families put tireless effort and resources into producing a quality product, day in and day out, and to see it devalued to the consumer has a deep and lasting impact.”

He joined with Dairy Connect CEO Shaughn Morgan in urging consumers to support Woolworths’ move, as shoppers had already done with the drought levy range.

Mr Banducci said the supermarket was “acutely aware” of budgetary pressures facing many customers and did not take its decision lightly.

"We believe it's the right thing to do and a key step in shoring up fresh milk production in Australia,” he said.

I look forward to Aldi, Coles and other retailers acknowledging public sentiment on this issue and following Woolies leadership on this issue - Shaughn Morgan, Dairy Connect

“Consumers have already responded to the opportunity to put more money back in farmers’ pockets,” he said.

“I look forward to Aldi, Coles and other retailers acknowledging public sentiment on this issue and following Woolies leadership.”

“We have always said this environment requires long term thinking and permanent solutions. Woolworths has demonstrated this today,” she said.

Agriculture Minister, Mr Littleproud also took the chance to fire another critical salvo at Aldi and Coles, and Woolworths, saying supermarkets could not pretend selling milk cheap had not hurt farmers.

All supermarkets should pay a fair price for all dairy – this includes cheese and yoghurt, not just fresh milk, which is a small fraction of the market. - David Littleproud, Agriculture Minister

“They’ve got to be called out on this rubbish,” he said.

“Consumers have the power here.

“If everybody who clicks ‘like’ on a Facebook video bought branded milk instead of cheap supermarket brand milk, or punished Coles and Aldi by going elsewhere, big changes would occur overnight.

“All supermarkets should pay a fair price for all dairy – this includes cheese and yoghurt, not just fresh milk, which is a small fraction of the market.”

He said the Australian Competition and Consumer Commission report into the dairy industry clearly showed supermarkets used their market power to drive down how much they pay processors.

Processors then used their bargaining power to drive down what they in turn paid farmers.

“There were around 7500 dairy farmers in 2010 and now there are just under 6000 as the industry has consolidated, he said.

“Coles and the big German, Aldi, must begin to charge consumers a fair price for milk immediately.

“There’s no point having cheap milk for consumers today if it sends farmers broke.

“Farmers have effectively not had a pay rise in a decade while the cost of feed and other inputs have gone through the roof.”