Australian cattle prices are expected to fall 3 per cent over 2019/2020 as the beef industry faces a triple threat of poor seasonal conditions, higher global production and increased export competition.

Forecasts released today by the Australian Bureau of Agricultural and Resource Economics and Sciences (ABARES) point to opportunities for beef producers but much hinges on a return to ‘normal’ seasonal conditions.

As widely reported, ongoing drought  across much of NSW and Queensland in 2018 led to an increased cattle turnoff and halted herd rebuilding efforts.

“Saleyard prices for young cattle are relatively low compared with finished cattle, and restocker purchases of breeding stock were at above average levels in the last six months of 2018,” according to ABARES’ Tim Whitnall. 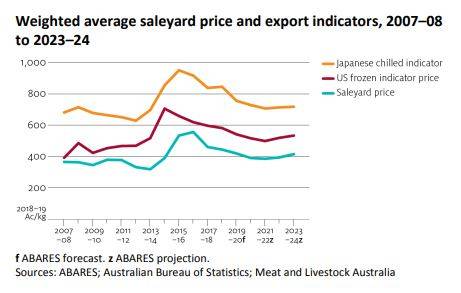 “This indicates that producers with available pasture or feed are preparing for post-drought herd expansion by taking advantage of the favourable margin between young and finished cattle.”

Over the medium term, herd rebuilding is expected to continue and saleyard prices are expected to remain relatively high in historical terms despite falling from recent highs.

Any moves to rebuild the herd would drive increased beef production over the medium term.

Mr Whitnall said while this would mean larger volumes of Australian beef exports, changes in global demand are expected to cause exports to Australia’s less established beef markets, such as China and the ASEAN region, to grow faster than exports to traditional markets.

Demand for beef imports is expected to fall in some of Australia's major markets over the medium term.

High domestic supplies in the United States will limit US demand for lean beef imports in the short term, but this is expected to rise later in the projection period. In Japan, slowing population and economic growth are expected to limit import demand growth for Australian beef.

Demand growth is expected to be strong in China over the outlook period as the rise of the middle class continues to fuel red meat consumption.

Over the medium term, this trend is expected to continue because economic growth is assumed to remain high, albeit at a slower pace.

Mr Whitnall has warned that threats do exist for Australian beef exports in China however.

Increasing demand for imported beef in China over the decade to 2017–18 has caused the Chinese Government to grant access to Australia’s lower cost competitors, such as Argentina and Brazil.

The Brazilian herd has undergone a significant expansion over the past two decades and the industry is expected to become more productive through initiatives such as crossbreeding of European breeds with the common Nellore cattle.

Over the projection period, China is expected to increase its imports of beef from Australia as well as other low cost producers. 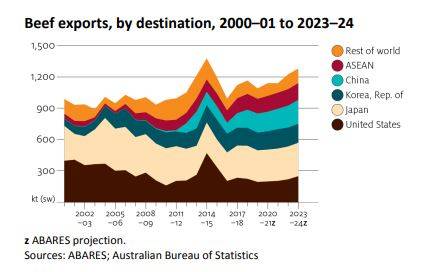 US cattle cycle projected to peak

ABARES expects that falling US steer prices and relatively flat corn prices over the next few years will reduce producers’ profits and ultimately push up slaughter rates.

As a result, beef supply in the United States is expected to be high for several years before ultimately entering a liquidation phase.