How to increase milker numbers without really trying - use a three-way crossbreeding program. 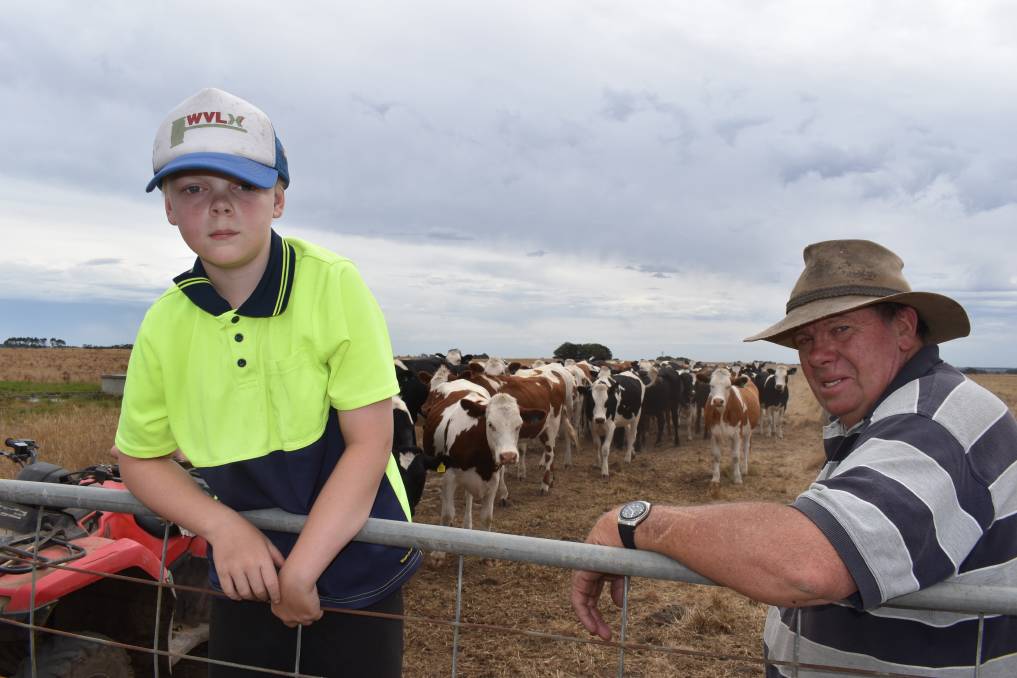 FAMILY: Tom Riches with grandson Flynn checking on crossbreed heifers on a dryland block near their home farm at The Sisters.

That's been the experience of Western District dairyfarmers Tom Riches and his son Paul, The Sisters.

The farmers continue to expand the business on the back of a breeding program that involves a three-way cross - Holstein, Aussie Reds/Swedish Red and Montbeliarde. ONE MAN: Milking time in the 40-unit rotary is a one man job for Paul Riches.

The herd was originally mostly Jersey until the 1980s when the breed "stopped in its tracks and the Holstein just took over, rapidly improving", Tom Riches said.

"We thought if we wanted to keep up we had to go with it. We started to use Holstein semen in the Jersey herd," he said.

After reading a story on crossbreeding in Australian Dairyfarmer magazine he said that's the way to go.

Mr Riches said the leading influence was how the crossbreed cows held their condition. 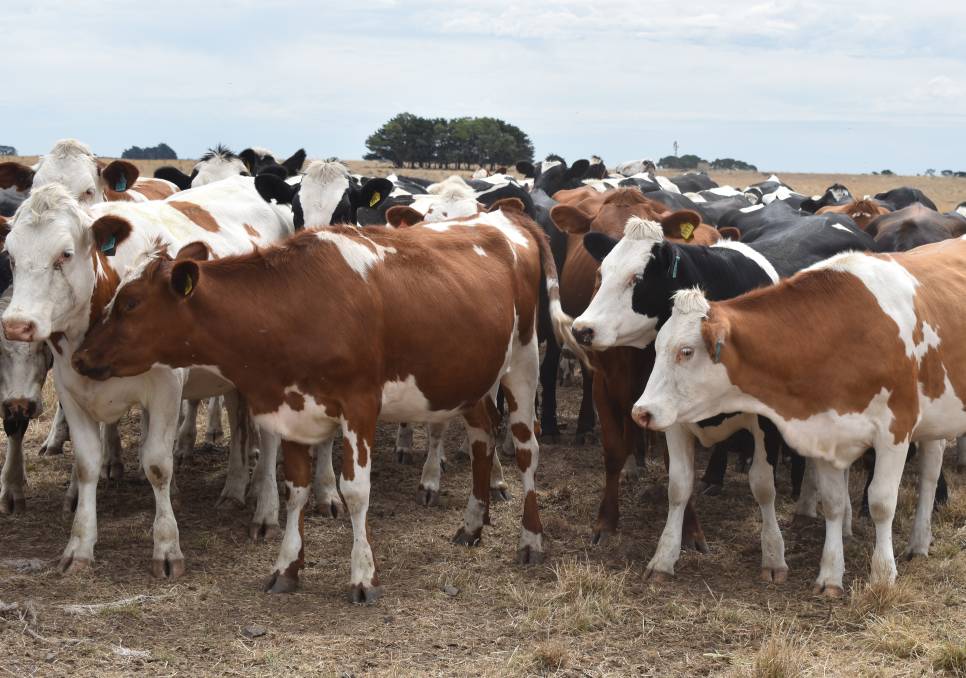 HEIFERS: A group of cross bred heifers at 18 months of age at Tom and Paul Riches, The Sisters.

"Holsteins are bred to milk and at the time I couldn't keep condition on our cows as the season went on. The more you feed them the more they milk and the more they lose condition because the're milking so well. I hate skinny cows," he said.

So in 2005 they started joining to Aussie Reds and Skandinavian Red breeds and reared 30 "red" calves and 30 Holsteins.

After two seasons of using reds they went the whole way but with a third breed - Montbeliarde.

The mating system is a circle - Holstein joined to red, red to Montebeliarde, Montbeliarde to Holstien and then back to red.

"You need the three breeds. They all have their attributes. We started with the reds because we wanted to just keep a lid on the size," he said.

Although fertility wasn't an issue then, fertility rates had increased out of sight and this season they had four per cent empty rate of 540 cows and heifers joined.

The longevity of the crossbreeds had also hit home in the past few years.

"We still have three or four of the original progeny from the first crossing milking, while the Holsteins have been long gone," he said.

The Riches don't have access to irrigation and have a short season so dry the herd off at about 270 days. This year they will take half the herd through for an extra month.

Production averages around 540 to 560 kilograms of milk solids per year from hay and 1.5 tonnes of pellets per year.

They don't do silage as the cropping paddocks were too far from the dairy.

"They retain their condition and are easy to get in calf and easy to calve," he said.

"We just have too many cows and we had to start finding excuses to sell a cow. We end up with far too many calves," he said.

They have reduced the AI period to just three weeks.

"This type of crossbreeding isn't the thing to do if you're going to retire in the next five years. People still want black and white cows to buy at clearing sales," Mr Riches said..

"We haven't ruined a Holstein herd, we've improved the herd. We don't care what anyone else thinks.

"I don't criticise anyone for doing what they do, what suits them."

The Riches also run a herd of cows that are joined to Speckle Park bulls.

Paul Riches said previously they joined any any Holstein or Montbeliarde cross that was not in calf to Speckle Park bulls to calve in February.

The first lot of progeny was sold through Mortlake saleyards in November. The dams were then sold as culls.

Paul Riches said this year they were calving 40 cows to Speckle Park.

At the next joining instead of joining all 400 cows to AI they plan to take the bottom 100 cows from the herd to run with Speckle Park bulls and AI the remaining 300 to dairy sires.

"We sell the Speckle Park progeny through the store sales in Mortlake. Last year the steers weighed 405kg at  nine and a half months and the heifer 385kg," Paul Riches said.

"We just leave them on their mother where they get plenty of milk."