Agriculture is struggling with falling productivity, but plenty of optimists are confident about achieving a remarkable turnaround

Despite the odds, farmers can easily achieve Australia’s lofty ambition of reaching a $100 billion agricultural production goal by 2030.

However, big changes are needed within their regional communities to make it really happen.

While the sector is currently struggling with savage drought, and extreme flooding, and falling productivity - down from $63b to $58b in two years - plenty of optimists were confident about achieving a remarkable turnaround in agricultural output.

I genuinely think the $100b target will be left in the dust if we get all the metrics highlighted in the NFF road map - Richard Heath, Australian Farm Institute

“I genuinely think the $100b target will be left in the dust if we get all the metrics highlighted in the NFF road map,” said Australian Farm Institute executive director, Richard Heath.

However, the enthusiastic support for the National Farmers’ Federation’s 2030 target was punctuated by an action list of priorities which the nation as a whole had to contribute to.

Fixing Australia’s self destructive energy policies - or lack of policy - and some far sighted thinking on effective water market rules and water security, including new storage dams, were among the hard choices facing the industry and community.

“Australian food manufacturers used to have an energy cost advantage over their competitors, but now our energy dilemma puts us at a complete disadvantage in relation to farm and manufacturing costs,” said KPMG lead agribusiness consultant, Robert Poole. 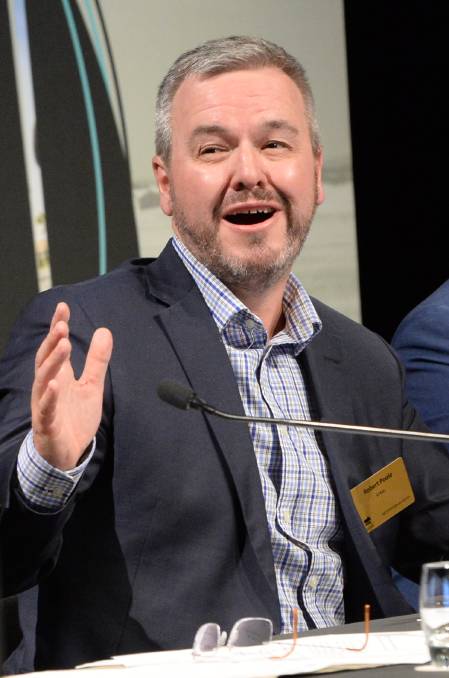 “Extraordinarily, we also now see high rainfall areas such as parts of Gippsland and western Victoria running out of water for livestock.”

At the top of the list was ensuring a much needed labour force - ranging from skilled technicians and farm service specialists to farm employees and transport workers - had reasonable, local access to dependable health, childcare and schooling facilities, and ample career choices in rural towns for themselves and their families.

“The idea that we need to attract more humans to help farmers be more productive and export-capable is a no brainer,” said Victorian Farmers Federation vice president and Sunraysia vegetable grower, Emma Germano.

Farmers have to make agriculture happen, but if we’re not putting farmers’ needs at the centre of the discussion it’s not going to happen - Emma Germano, Victorian Farmers Federation

“We must start thinking a lot more about regional and rural communities - real people, readily available and capable of fixing a tractor's front wheel bearing problem on a Sunday night so you can harvest on time.

“The reality is farmers have to make agriculture happen, but if we’re not putting farmers’ needs at the centre of the discussion it’s not going to happen. “International free trade agreements are excellent, but an FTA doesn’t mean anything if you can’t get your table grapes to market because you can’t retain efficient harvest labour in the district, or get people to keep your machinery working, or you rely on poor roads which make your fresh produce expensive to freight, and dusty.”

Ms Germano wanted Australia to be more strategic about its role as a global food producer and exporter, following the likes of the Netherlands or Israel, which had co-ordinated national policies to achieve agricultural growth.

In fact, despite our agricultural capacity, Australia actually ran the risk of “becoming irrelevant” as an exporter servicing the booming global food market opportunities, according to the AFI’s Mr Heath.

“Too often we talk about all the opportunities open to Australia, but everybody in the world is talking about that opportunity,” he said.

“We must realise the urgency to do something about it and embrace change on a national scale.”

While $100b provided a useful goal for governments and industry planners to recognise, he said it meant little to most Australians whose money and support for the vision was badly needed.

Agriculture had to represent more than a big number - it needed to “look, touch, feel and smell” special to the Australian public.

He said President John F Kennedy’s goal to put “a man on the moon by the end of the decade” was considered completely unfathomable in the early 1960s, but it captured the US public's imagination, becoming a national agenda.

Americans also realised if the US did not achieve Kennedy’s moon shot goal, the Soviet Union would.

Similarly, Australians needed to see and support agriculture as a trusted, ethical industry which managed the landscape well, otherwise there would be insufficient policy and community momentum to keep our farm sector relevant on a global export scale.

But the challenge was ensuring the community saw agribusiness in general as working towards goals like carbon neutrality, halving food waste, being trusted animal welfare and research advocates, and achieving sustainable land management goals.

Achieving that trust should also lead to farmers being paid for ecosystem management services - potentially itself a new sector generating huge revenue for agriculture. “There’s a lot of commercial sector failure in this field at the moment,” he said.

“Weather risks will always be part of farming, but we must get to the point where they are planned for so they don’t frighten the superannuation industry and other sources of new capital investment badly needed in agriculture."

The supply chain must back its suppliers with a worthwhile incentive to ride out market and seasonal fluctuations, otherwise that supply chain would be forever erratic, or collapse completely.