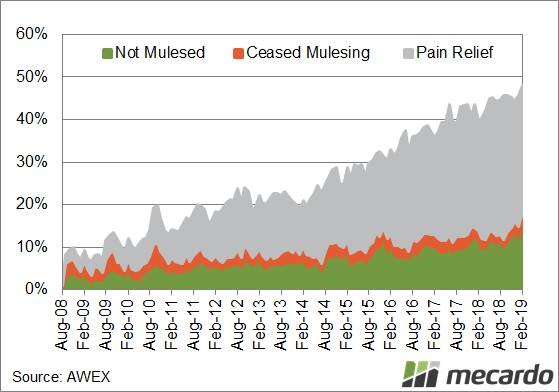 FIGURE 1: Mulesing status by proportion of clip sold. The proportion of wool declared as ceased mulesed, non-mulesed and to have used pain relief by month for the Australian clip from 2008 through to February 2019 has risen to nearly half the national clip.

Nearly half the Australian wool clip is now declared as ceased mulesed, non-mulesed and to have used pain relief, totalling 45-48 per cent of the national clip (Figure 1).

Despite the lack of clear, consistent price premiums during the past decade and any firm strategic direction by the wool industry, farmers have once again made some substantial changes to the national clip by action at the grassroots level.

The underlying trend of non-mulesed wool rises by about 0.9 per cent a year (Figure 2). 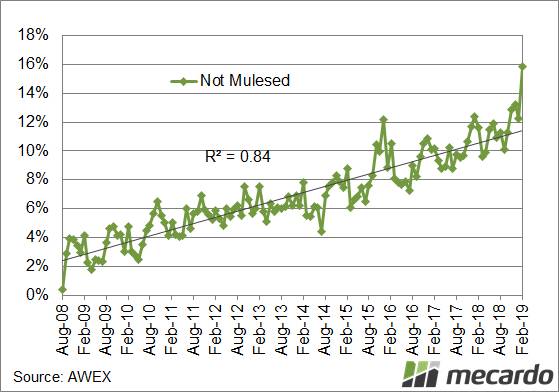 The trend for pain relief wool rises at around 2.9 per cent of the clip each year, with the current proportion of the clip about 30 per cent. Both rising trends show an industry which is steadily, and substantially, changing its animal handling practices.

Splitting the categories up by breed reveals that pain relief is dominated by Merino wool, with 29 per cent of the wool sold at auction being Merino and declared to have used pain relief.

Crossbred wool declared as non-mulesed makes up 5.4 per cent of the clip.

Mulesing is neither the beginning nor the end of animal rights debates, but it is an inflammatory one.

The good news is that the industry, at the grower level, is adapting to this issue.