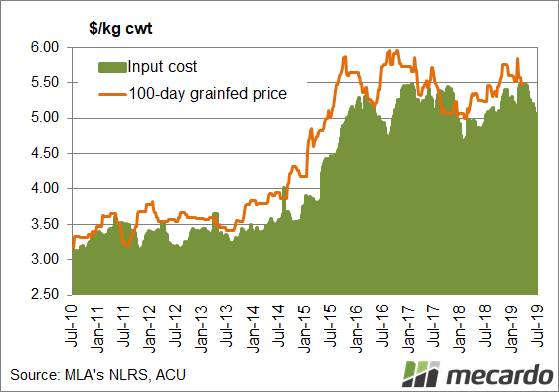 FIGURE 1: Northern grain-fed inputs verse sale price. Apart from a bit of an abnormal one week peak, the Over the Hooks 100 day grain-fed steer Indicator has been largely steady around 550c/kg cwt for much of the year. Softening input costs have offered some relief for lotfeeders.

Falling young cattle prices, combined with lowering grain prices have offered respite to some lotfeeders in the last couple of months. However, with the forecast rain on the way and little improvement in grain supply in the short term, there could be some interesting times ahead for cattle feeders.

Since the start of March, feeder cattle prices have experienced an easing trend, in line with the rest of the cattle market. It's not likely that there were more feeders available, but the volume of very light cattle and domestic feeders, seems to have taken the heat out of the export feeder job.

Short fed and Medium fed export feeders have fallen 34 and 32c respectively since the start of February. The falls equate to around 10 per cent, but prices remained robust in comparison to the fall in the Eastern Young Cattle Indicator (EYCI).

The Medium Fed feeder price has moved under 300c for the first time since mid-2015, while the Short Fed Feeder is also at a three year low. However, neither indicators are far off critical support levels and are likely to bounce back.

With the lower feeder prices, and lower grain prices, margins on feeding cattle have improved since January (Figure 1). Northern cattle have been turning a profit, albeit a small one after overheads in most cases. In the south, lotfeeder margins have become 'less negative'.

The current situation points towards steadying feeder prices, but combined with the rain forecast, there is likely some upside, especially in the north, as all young cattle supply tightens.

For finished cattle, there is upside as well.