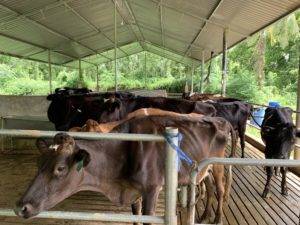 A war of words has erupted between Australia and Sri Lanka over the performance of imported dairy cows meant to lift Sri Lankan domestic fresh milk production.

Shipments of dairy cows from Australia and New Zealand will be halted until after an inquiry into why a number of them have died on Sri Lankan farms.

So far 5000 PTIC Holstein-Jersey heifers have been shipped under a government program to increase Sri Lanka's fresh milk production to reduce the country's imports of expensive powdered milk.

The Sri Lankan cabinet decided in 2014 to import a total 20,000 in-calf heifers but some of the farmers who subsequently purchased the cows are now claiming they are facing financial ruin because of poor milk yields, low conception rate, abortions, stillbirths, high mortality rates and unrecognised diseases.

They say the cows, which cost them around $1600 a head, were unsuited to Sri Lanka's hot and humid tropical conditions although Holsteins from Australia have been performing well in Indonesia.

Holstein-Jersey cross heifers were chosen because purebred Holsteins were considered too big for Sri Lankan farmers who  were used to handling their small native dairy cattle.

Wellard released a detailed statement on March 18 in which the company claimed a "handful" of the 68 farmers selected by the Sri Lankan Government to receive some of the cattle had failed to follow prescribed herd management advice which had caused some animal welfare issues on those farms. 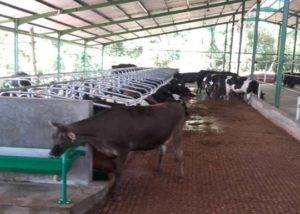 THE RIGHT WAY: Wellard said the imported dairy cattle in the picture above are being managed and fed properly in Sri Lanka.

"As a result, the farmer selection criteria will change," the statement said.

It said 84 million litres of milk had been produced by the cows since the program began (including a pilot program in 2013), replacing $US32 million of milk powder imports.

The statement claimed Wellard regularly monitored a number of key production and animal health related measures to assess performance and identify emerging issues. Mortality was one of the measures recorded.

"There were 95 mortalities from the first shipment in the first year, a mortality rate of 4.8 per cent.

"There have been 331 mortalities from the second shipment, representing an annualised mortality rate of nine per cent.

"Unfortunately, four farms that received cattle in the second shipment account for 61pc of the recorded mortalities from that shipment," the statement said.

"This has been the source of immense frustration, as those farmers are ignoring advice, particularly on nutrition, and animal health is falling to the point of mortality," Wellard executive chairman John Klepec, said.

"So while we are continuing to seek immediate changes to the nutrition management on those farms, we must also change the Sri Lankan farmer selection criteria for future shipments so the negative animal welfare outcomes that have occurred on these few farms are not repeated and other farmers in the program are not tarnished by the results of few."

He said Wellard had up to 90 Wellard and Wellard contracted staff in the field in Sri Lanka advising and educating the local farmers who have received the cattle on best practice nutrition and husbandry techniques.

"We are proud of our role in helping developing countries provide nutrition to their citizens and to increase the herd management skills of local farmers," Mr Klepec said.

Meanwhile, Sri Lankan dairy farmers have been airing their grievances and frustrations about the deaths and lack of performance of the imported cows to Australia's national broadcaster, the ABC.

And the Ceylon Cattle Farmers Federation said the cattle weren't suited to the Sri Lankan environment and is now demanding an inquiry into all trade deals to import dairy cattle from various countries .