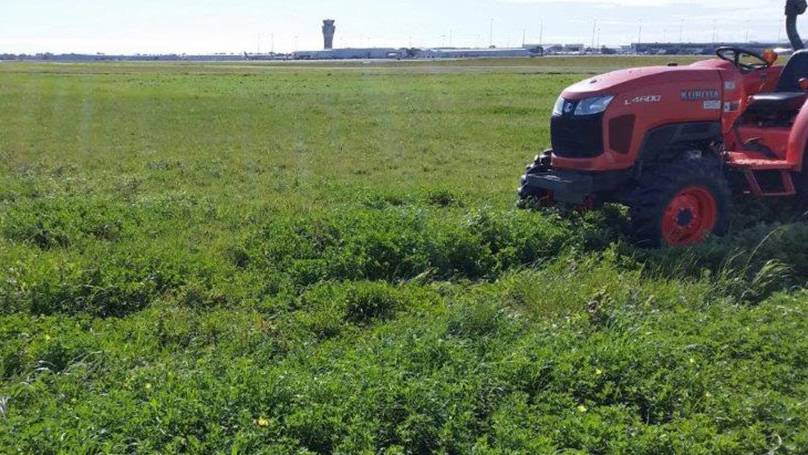 Growing lucerne in the buffer zones of the Adelaide Airport is promising in terms of lowering ambient temperatures, which in turn can reduce carrier costs.

Lucerne hay could be the secret to bringing down temperatures at airports, potentially saving aviators big dollars.

WITH the current focus on food miles and limited movement to cut down freight costs, one potential hay crop could have impeccable credentials.

Under a proposed trial, which is designed to reduce the ambient temperature around the often-scorched Adelaide airport, thousands of tonnes of lucerne hay could be produced in the middle of the facility, just ready to be shipped off to growing Asian markets.

Of course, the reality is much more complex and the hay far more likely to end up in the premium domestic market, but the novel idea has a number of benefits.

The trial, which involves having green cover in the areas of the 200ha Adelaide Airport site that are not built up, has reduced ambient air temperatures by more than 3 degrees on warm days.

The trial of four hectares was water by stormwater captured by SA Water and could see some major benefits to airplane fuel efficiencies which could save millions for big aviators.

In warmer, less dense air, planes must travel faster down the runway to produce the lift needed for take-off.

When a runway lacks the distance required to reach these speeds, a plane’s weight must be lowered by removing passengers, luggage and cargo. This reduces profit for the airline.

A number of plant species were trialled to see their impact on ambient temperatures, including grass species such as kikuyu and fescue, but lucerne was the most effective – and had the fringe benefit of being a lucrative fodder crop.

A decision on the business case is expected later this year, but Greg Ingleton, SA A Water environmental opportunities manager said initial findings were positive that hay could be grown in the airport’s buffer zones.

He said it was a concept that could conceivably be used by other airports with problems with extreme heat.

“These results gave us confidence that using airport buffers for cropping could be viable, compared with current maintenance, and the cooling component is free,” Mr Ingleton said.

Mr Ingleton said the next stage of the trial would be the installation of a permanent centre pivot irrigation system that would expand the watered area from 4ha to 7ha and allow more lucerne planting to take place.

Adelaide is known for its hot, dry summers.

The city has experienced 12 days where daytime temperatures exceeded 37C since January 1 including a maximum temperature of 46.6C on January 24.