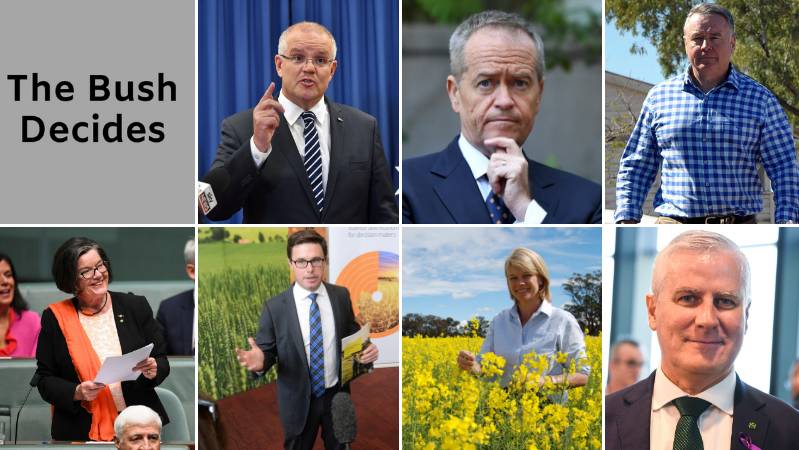 With the federal poll set for five weeks' time, on May 18, major parties are honing their pitch to the nation, and they should be aware a one-size-fits all campaign won't cut it anymore.

To cut through to swinging voters in marginal electorates, candidates will need to address local issues, and not rely on the cut-and-paste policies from head office.

Things are incredibly tight in Canberra and every vote in a marginal seat will count. 77 seats are required to form a majority government.

As it stands, the Coalition has 73 seats, Labor has 72 and there are six MPs on the crossbench.

The figures below represent the two party preferred result. Typically, anything over a 56 per cent 2PP result is considered safe.

But in this election more than ever in recent history, we expect some big swings and potentially, a few shock results.

Who knows what will happen up there? There are heaps of very tight marginal seats and a swing to Labor could determine the result. The Liberal National Party holds 21 out of QLD's 30 federal seats, while the state government is Labor. Margins will be tight, and it remains to be seen if voters feel compelled to balance their federal votes against the incumbent state government.

Three key rural seats are in play, with the LNP on tight margins. Labor only picked up two seats in 2016, so a big shift is needed, but when the time is right Queensland will really bend the banana. In each marginal seat the LNP has and will go hard on promoting coal, effective vegetation clearing laws, and dams as big rural issues. But Labor's leftwing policies have got them to within are within striking distance, so will lurching to the right help the LNP?

*Listed below are the electorate, a major town, the sitting Member of Parliament, the 2PP result from the 2016 election and the swing to, or from, the winner.

SA Liberals copped a big swing against them in 2016, down 6% and losing two of their six seats. They retained the rural seats Grey and Barker, but a significant shift away was driven by new entrant the Xenophon Party. Essentially, the X factor turned the state's two safe rural conservative seats into nominally marginal rural seats.

The Liberals lost one seat, Labor gained two and the Nationals are still on a national doughnut. It's expected that WA will be crucial to the national result, but only one (semi) rural seat is in play. Durack, O'Connor and Forest are locks for the Libs. But Pearce, which spawned Kim Beazley and Carmen Lawrence and takes in suburban Perth and a snippet of the wheatbelt, is nominally marginal. The Nationals were disappointed to fail in their bid to take Durack, held by Liberal MP Melissa Price on a 61% margin, and even more upset to miss out on their play to recapture O'Connor.

Melbourne will be a key battleground for the Liberal party, which is shovelling as we speak to sandbag once blue riband urban seats against the real prospect of a Labor landslide. But things are more nuanced in the bush. Disgraced former Nationals Mallee MP Andrew Broad leaves his seat on a 2PP margin of 71, but will that be enough to weather the backlash for his behaviour? The state election held bad signs, with independent Ali Cupper prising the safe Mildura electorate, within Mallee, from the Nats.

Damian Drum won Murray in a three-cornered contest with Labor and the Liberals, but he holds the seat with a theoretical marginal majority. He is now contesting redrawn boundaries in Nicholls, based the same region. Will the popular outcry against the impact of water reform on irrigation towns take its toll? Popular Indi independent MP Cathy McGowan steps down this time around endorsing another independent Helen Haines, who faces a challenge to retain the seat from Liberals.

In the recent state election the Nats lost three seats, starting from an already low base. Federally, there's two marginal North Coast seats that the Nats will be worried about losing to the left, wither Labor, or independents. The North Coast seat of Cowper is marginal, incumbent MP Luke Hartsuyker is retiring and his relatively unknown replacement will face a challenge from its former independent MP Rob Oakshott, who entered parliament with the Gillard government. Page looks very tight and its state counterpart Lismore went from Nats to Labor.

Meanwhile, on the South Coast, the Nats are in with a shout among a three-cornered contest. The junior Coalition partner has taken the unusual step to throw its hat in the ring to challenge both Liberal and Labor in Gilmore. And interestingly, there's one very safe Liberal seat in the Riverina that could, against the odds, end up in play due to an anti-Basin Plan independent who blames the Nats for the negative impacts of water reform.

Labor picked up three seats from the Coalition at the 2016 election. It now holds four of the five seats, with Independent MP Andrew Wilkie safely ensconced in his seat of Denison. The Liberals face an uphill battle to gain ground on Labor down here.