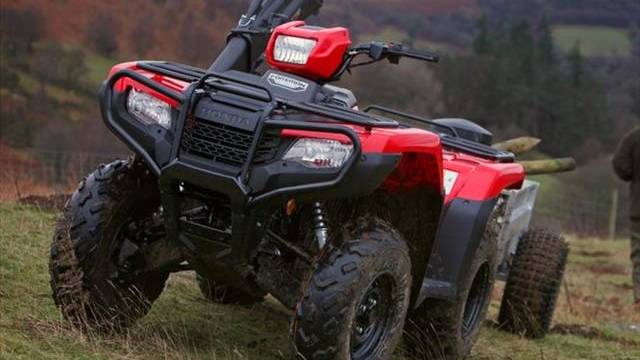 Quad bike manufacturer Yamaha Motor Australia has said it will be forced to cease selling utility ATVs in Australia if recommendations made by the Australian Competition and Consumer Authority are brought into law.

Following on from an earlier announcement made by Honda (see below), Yamaha Motor Australia Director Brad RyanIf said should the ACCC recommendations be ratified, then within 12 months, ATVs will need to comply to certain engineering standards and within 24 months will be required to be fitted with an Operator Protective Device (OPD) and meet new standards.

"The science behind the draft is both faulty and selective. Yamaha Motor Australia has advised the ACCC that behaviour is easily the biggest contributing factor to ATV safety. We pointed out that three successive coronial inquiries have concluded that enforced behavioural standards rather than product modification are the solution. And that our industry is actively trying to change behavioural attitudes and would greatly appreciate support in achieving this," he said.

"Unfortunately the ACCC Quadbike Taskforce continues to push for engineering changes and product modifications which look to be political rather than scientific decisions. And now the federal government is making a decision that will make no utility ATVs our new reality."

Yamaha said the the absence of its ATVs from the Australian market will hamper farm business and negatively impact many ATV dealers.

Honda threaten to pull out of Australian ATVs

Honda have announced it will stop selling quad bikes in Australia if the draft standards proposed by the Australian Competition and Consumer Commission become law.

The company has instead called for the responsible governments to provide legal frameworks that would mandate the wearing of helmets and make it illegal for children under the age of sixteen to ride adult sized quad bikes.

Mandatory fitting of operator protection devices has been a particularly contentious issue, with the majority of quad bike manufacturers, including Honda, challenging their suitability, while the National Farmers Federation and Farmsafe Australia remain supportive of the ACCC stance.

Honda managing director Robert Toscano said he believes the ACCC is experimenting with farmers lives as the automotive industries modelling and research indicated no overall net benefit to the use of operator protection devices on quad bikes.

"Those results showed at best fitting an operator protection device is fifty-fifty, for every fatality and injury it saves, it can create another one," he said.

"To us it is not a safety standard, it is a bet each way."

While over 10,000 operator protection devices have been fitted in Australia with no records of causative fatality or injury to date, Mr Toscano said there were not enough units fitted as a percentage of total bikes to draw any conclusions.

"I'm not saying the University of NSW research is incorrect, I am saying it is inconclusive and even the ACCC report admits to that," he said.

Mr Toscano said should the proposed ACCC standard become law, Honda would pull its quad bikes out of the Australian market.

"No reputable company can meet the proposal because it lacks engineering and design rigour. Any company that tries to meet the standard will be open to the accusation that it is playing with farmers' lives," he said.

"Honda won't fit devices to our ATVs that real world studies have shown do not improve safety.

"The evidence is overwhelmingly clear that wearing a helmet and keeping children off adult-sized ATVs will drastically cut injuries and save lives."

Mr Toscano said the ACCC, due to its scope, is dealing with a very narrow element of the problem and more lives would be saved through behavioural changes, particularly the use of bikes by children.

"I'm not defending the fact that there are deaths in Australia, it is an absolute tragedy.

"What is more tragic is we say these products are not for children, never ever should a child under sixteen have access to or ride a full size ATV.

"The absolute tragedy is that of the five deaths this year, three of them were children."

Mr Toscano said Honda supported changes to legislation that would put a legal framework around the use of quad bikes, in effect making it illegal for a child to use a quad bike and mandating the use of safety equipment, including helmets.

"We have said it to the government, the regulators and the ACCC," he said.

"We would love a framework to prevent children under the age of sixteen from riding adult sized ATV's.

"We want a framework on helmets as well."

Currently Israel is the only country to have the mandated fitting of operator protection devices on quad bikes, Honda does not supply the Israeli market.

As the ACCC is in caretaker mode in the lead up to the Federal Election it was unable to directly respond to specific issues in the report, however an ACCC spokesperson said the ACCC's focus in proposing a safety standard has been on the unsafe characteristics of quad bikes.

"This year alone, seven people have been killed as a result of quad bikes accidents, including two children last month," they said.

"Individual manufacturers must make their own commercial decisions about participating in the Australian market.

"The draft safety standard proposed by the ACCC is open to public consultation until 10 June 2019. It can be found on the ACCC's Consultation Hub.