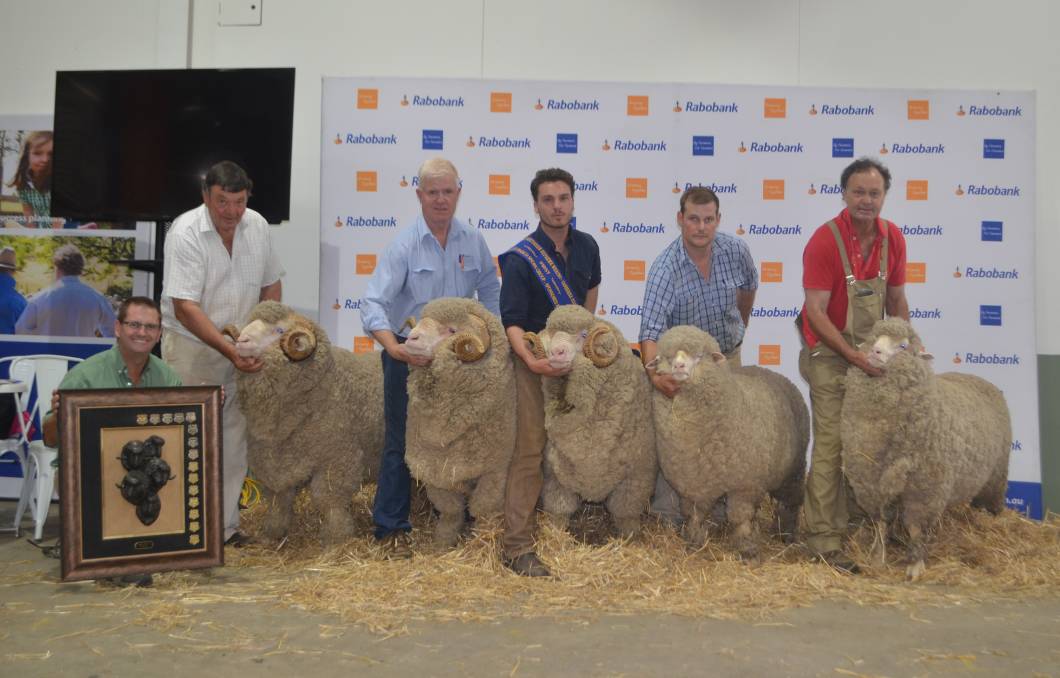 ADVERTISER CONTENT: The 'Merryville type' of sheep and fleece are well known throughout Australia.

ADVERTISER CONTENT: THE 'Merryville type' of sheep and fleece are well known throughout Australia and many flocks have contained these genetics at one time or another.

Wally and George Merriman took over ownership of the stud and commercial flocks in 1988, based at Boorowa, NSW, as the fifth generation of woolgrowers.

The Merryville flock was established in 1904, when Sir Walter Merriman inherited foundation ewes from a share of the original Ravensworth stud.

Originally Saxon bloodlines, Sir Walter brought in Peppin bloodlines by the strategic purchase of rams and ewes. He bought a Wanganella ram and, in time, ewes from the Murgha stud dispersal. These bloodlines are still evident in the fine-medium wool families produced in the stud.

"The stud is divided into four sections," Wal Merriman said.

"We breed in a higher rainfall zone and we endeavour to produce a good, white wool that will withstand the heavy rainfall on the tablelands and slopes."

Sir Walter passed away in 1979 and the stud came under the management of his son, Bruce.

It was Bruce's steady hand on the wheel during the dynamic period of the 1960s and 1970s that helped set up the stud for today's elite performance.

Mr Merriman credits his father with introducing measurement of fibre and body weights, combined with wool cut. He believes these techniques of using raw data, with hands-on assessment, has been integral to increasing the performance of the 'Merryville type' of sheep.

Merryville stud holds its own on-property annual sale in September. By sale day, ram lambs have been side-sampled twice and their April-shorn fleece weighed. That data is available to intending buyers.

Along with rams, Merryville stud sells semen, while stud and commercial ewes are sold in February each year.

Shows give us the opportunity to promote our breed and benchmark our animals against other studs. Attending them also puts our rams in the backyard of the client. - Wal Merriman, Merryville Merinos

Clients are local to the stud, as well as Central Western NSW, central Victoria, South Australia and Queensland.

The stud is heavily involved in showing sheep across Australia, attending 10 to 12 shows annually. Mr Merriman is also a sought-after show judge.

"Shows give us the opportunity to promote our breed and benchmark our animals against other studs. Attending them also puts our rams in the backyard of the client," he said.

"We believe in raw data. Because we have so many generations of data from the objective measurement classes, we're able to identify our sires without seasonal variables, as all these sheep are checked for wool growth, fed the same and shorn at the same time."

All the March-shorn show and sale sheep are used in the stud and flock, with a six-week joining period.

"That gives us a good genetic turnover in the flock," Mr Merriman said.

Merryville has a proud history of show performances including winning an unprecedented four Stonehaven Cups in a row, most recently in 2017. In total, the stud has been awarded 27 Stonehaven Cups at the Sydney Royal Easter Show.

Also this year, Merryville won the grand champion fine wool ram class, with a ram by the 2016 champion, Supreme 14 - cutting 15.5 kilograms at 17.6-micron.

At the Dubbo Sheep Show in 2014, Merryville Merino stud won the performance class with a ram that cut a fleece weight of 18.3kg at 17.8-micron.

These wins, among many others, are testament to the place Merryville Merino stud still holds in the Merino industry.

Joining is one ram to 70 ewes and lambing historically averages 87 per cent.

"Our economic model is based on growing heavy cutting, fine wool sheep.

"We take the view we shear the sheep six times and sell them once - at 28kg to 30kg over the hook.

"Our philosophy is to breed from the best. We use the Grass Grow system of managing our sheep on improved pastures, keeping in mind grazing efficiency against a Dry Sheep Equivalent (DSE) rating."

As well as nutrition, animal welfare is a priority for Merryville which includes the mulesing of all sheep.

"Mulesing is an animal welfare practice and without it, some sheep would die a slow and painful death from flystrike," he said.

"We've embraced the use of pain relief for mulesing and that's the best animal welfare outcome for our flock."

The story Merryville stands out first appeared on The Land.