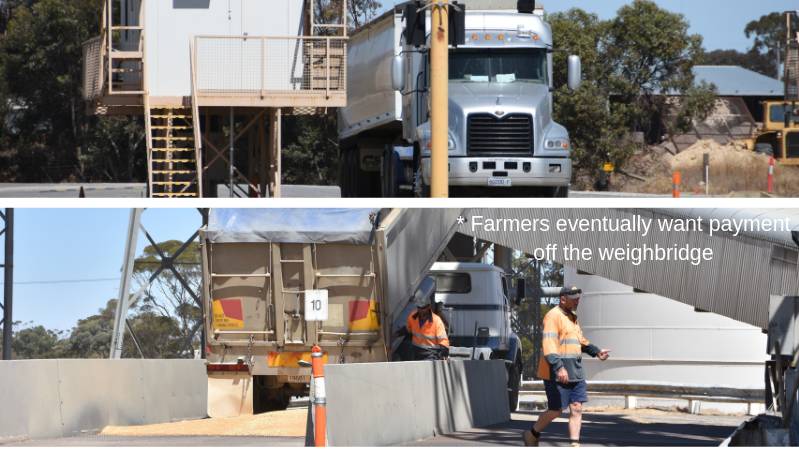 Farmers eventually want to see payment off the weighbridge, but in the interim will push for tighter payment terms.

Grain growers are being told the most meaningful action in protecting against insolvencies is to insist on shorter payment terms.

"We've seen with (failed grain business) Lempriere Grain that the GTA code wasn't worth the paper it was written on, to say it is in place to help growers is a sham," Mr Weidemann said.

"Instead, we think focusing on lobbying really hard to cut payment terms back to a week maximum is where we should be concentrating our energies, rather than waiting for the trade to act," he said.

"The pressure from growers has already had an impact, terms have been cut from a standard 30 days to now many companies offering terms of a week, but there's still plenty out there wanting to buy grain on 30 or even 60 day terms and we're urging growers to not take that."

Mr Weidemann said shorter payment terms meant there was less time for alarm bells to be raised if payment was not received on time.

"It could potentially be the difference between selling one load to a company that does not pay and several loads."

His comments were echoed by Ash Fraser, Victorian Farmers Federation grains group president, whose organisation has been flooded with inquiries from growers caught out by the Lempriere Grain collapse, but he went even further, saying two-day payment terms should be demanded, given the technology to process payments quickly is now available.

Down the track, he said he was hopeful there could be payment off the weighbridge, sentiments echoed by Mr Weidemann.

"You pay upfront at the supermarket or the chemist, why not for farm goods when the technology is there so we can do it," Mr Weidemann said.

Mr Fraser said growers may be happy to deal with a customer they had an existing relationship with on longer payment terms, but said this would come down to individual decisions, rather than being an industry standard.

Mr Weidemann agreed that some farmers could choose longer payment terms, but added he hoped the trade would need to offer a risk premium for farmers to do so.

"It may be that growers are offered a $5 a tonne premium to get paid on 60 day terms and that might be something they are comfortable with, but shorter terms should be the norm."

Pat O'Shannassy, Grain Trade Australia chief executive, said GTA membership and the code of practice were not designed to be the sole point of reference for growers making selling decisions.

"It is not a credit assessment, but GTA membership requires a company get referees, that it is held in good standing within the grains industry.

"This does not rule out the risk of becoming insolvent, but it does mean the business will not act with malice in its dealings with growers, it is something growers should consider as part of a range of decision-making criteria, along with things like what the grower groups have been saying around payment terms."

More broadly, Mr Weidemann said he was concerned GTA, which he labelled a trade lobby group, had such far-ranging powers within the industry.

"They are in control of standards and contracts and a whole host of things that probably should not sit with a body that is linked with one side of the supply chain.

"There are grower members on GTA committees, but when it comes to a vote they are outnumbered by trade representatives, meaning the interests of the trade are always going to come first."

"This is due to legacy issues as the single desk was deregulated and does not reflect the industry as it sits today."

"It's something we're conscious of, we're talking to grower groups and we're meeting to discuss the issue to see what there is that can be done."