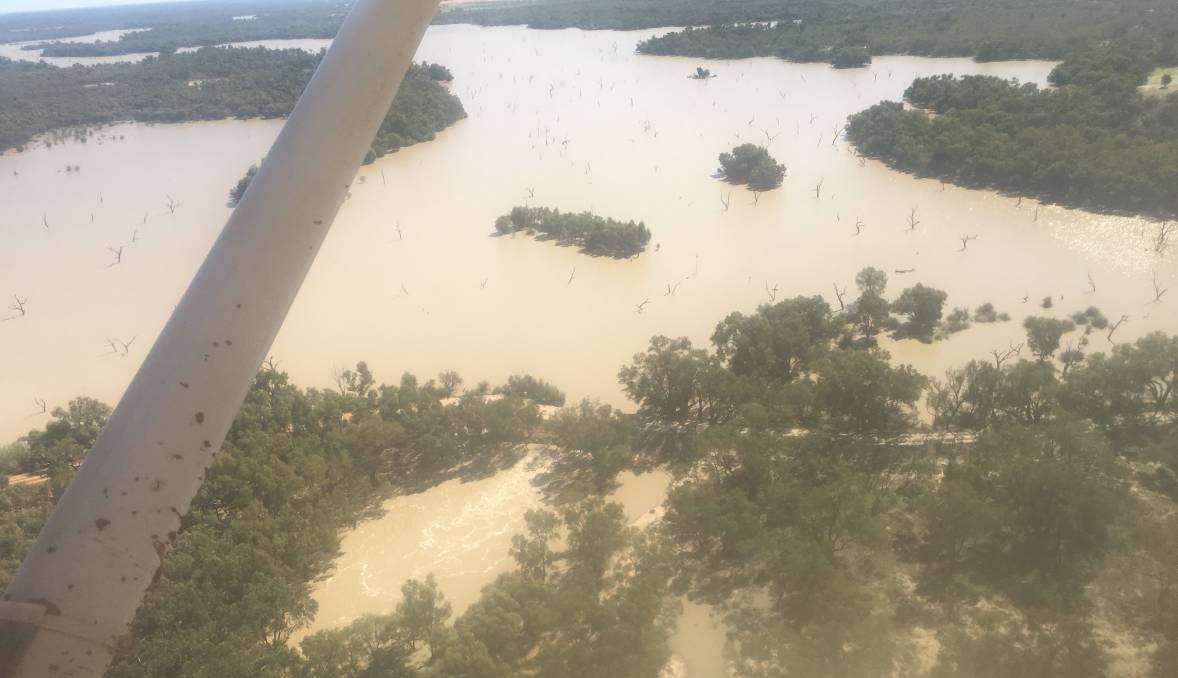 More of the of the Warrego River flows from April rain, pictured here, should be on their down the Darling, not sitting behind levees, locals say.

Flood levees remain in place a decade after Labor's cash splash on national park and water buybacks to restore the Darling River to health.

In 2008 Penny Wong, the then Labor Climate Change and Water Minister, said buying the historic sheep run and cropping property would restore inflows and bring the Darling River back to health.

But her deal didn't mandate the removing the levees.

Right now a whopping 23,000 megalitres of water from localised rainfall that ran down the Warrego and flowed into Toorale's storages is trickling through the levees into the Darling at just 600 megalitres a day.

Locals are angry. They say rainfall from April in the Warrego catchment, west of Bourke, could have made it as far downstream as far as Menindee if ran free.

"If those embankments were removed then the water from the Warrego could have got to Wilcannia and into the weir pool... it could give us six months of water supply and taken us off bore water," Mr Hill said.

Pipes now run through the embankments, allowing a maximum flow rate of 600ML/day from the floodplain to the Darling.

Locals argue if the river had been allowed to flow fuller and faster the water would make it much further downstream than where it has so far - to Louth.

"It seems to be a priority (for government) to water the floodplain, rather than delivering water for critical human need," he said.

"It's absolutely desperate downstream of Tilpa now. Wilcannia, Menindee and Pooncarie are all trying to live off bore water because it's like pus in the river.

We thought all the embankments would be removed and the Warrego would flow free into the Darling - Mark Hutton, former Darling River Action Group chairman

"The purpose of the buyback was to get more water into the Darling. The opportunity was there this season, if those works had been done.

"We're supposed to live in the best country in the world, but it seems like some of us don't matter."

Ms Wong said the Toorale purchase would deliver an average of 20 gigalitres to the Darling, and up to 80GL in flood years.

"Returning this water to the Darling will begin to turn around the long-term decline of this once great river," said Ms Wong ('Toorale a panic buy', The Land, Sept. 18, 2008, p6).

"There was no specific agreement to remove floodplain embankments in the 2008 NSW-Commonwealth agreement," a department spokesman said.

The buyback deal transferred irrigation licences to management under the Commonwealth Environment Water Holder, and the land management to NSW government.

The NSW Water Act designates critical human need as top priority, above the needs of the environment and irrigation entitlement holders.

Locals support watering the environmental assets on the Toorale floodplain - which include habitat for native birds, fish and flora - but they are shocked work hasn't been done to enable water to move efficiently from Toorale into the Darling in times of critical human needs.

Former chairman of the Darling River Action Group, Mark Hutton, said he and his group raised the idea of Toorale buyback with Ms Wong in a meeting at Broken Hill.

"We had a chat with her at the Musician's Club, told her about Toorale and they (the federal government) ended up buying it," he said.

"We were told the earthworks would be pulled down, that was certainly our understanding. We thought all the embankments would be removed and the Warrego would flow free."

Mr Hutton said since Toorale became a national park priorities have shifted from Senator Wong's vision for the Darling to the environment around the man-made water storages.

"The national park mob, because of the artificial wetlands, decided to leave the embankments in place and hold back the water," he said.

"We wanted it left as a sheep station, so the district wouldn't lose jobs, but they turned it into a national park."

To date the authority responsible for Toorale, NSW Office of Environment and Heritage (OEH), has made little headway on linking the Warrego to the Darling.

In 2012, the Commonwealth provided the responsible agency, NSW's Office of Environment and Heritage, with $4m to "decommission and modify" the levees. It upped its funding to $9m this year, after OEH requested more cash.

OEH has proposed a suite of works to balance the need to increase the capacity of Warrego flows into the Darling with the aim of maintaining ecological values on Toorale's floodplain.

OEH has sought government approvals to rework the levees and increase the maximum flow rate from 600 to 900 ML/day.

It is estimated that 23GL flowed into the storages at Toorale, and 16GL went through the pipes to the Darling.

A spokeswoman for OEH said flow from the current event (on the Warego) would "continue to pass through to the Darling River until the inflows cease, including some return flow from the floodplain".