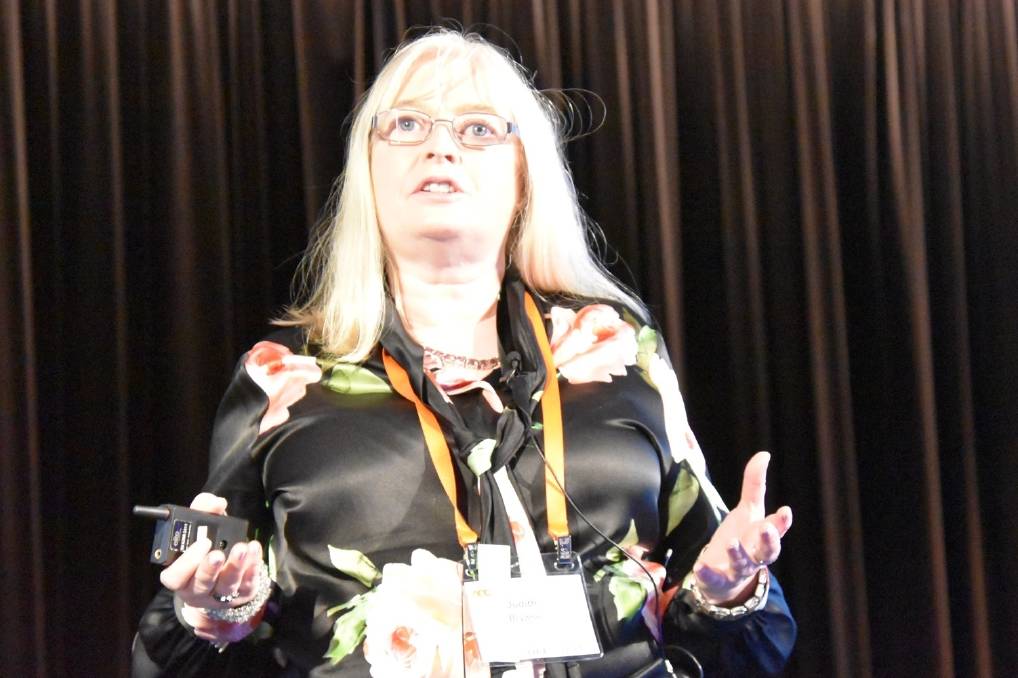 Dr Judith Bryans: there are a lot of plant-based products that call themselves an alternative to dairy, even though nutritionally they are not equivalent.

Dairy is fighting a war on several fronts to remain a key part of people’s diets, the Australian Dairy Conference was told in February.

Dairy is fighting a war on several fronts to remain a key part of people’s diets, the Australian Dairy Conference was told in February.

But the industry has a good story to tell consumers and should take the opportunity to promote milk as a superfood.

And some of the buzz around non-dairy alternatives is little more than marketing hype that does not reflect what’s happening in the marketplace.

The UN had voted recently to reduce the harm of fats, sugar and salt in the diet, as it tried to combat the negative health impacts of poor diets.

Dairy was classed as a high-fat food — and although the industry had successfully had the UN motion amended to specify “excessive” consumption of fats, the policy had already resulted in Canada excluding dairy from its latest dietary guidelines.

The industry needed to lobby to show the nutritional value of dairy.

“If you go into a supermarket in the UK, there are a lot of plant-based products that call themselves an alternative to dairy, even though nutritionally they are not equivalent,” she said.

“They are not equivalent in taste or texture.

“But they trade on dairy names and dairy values.”

Dr Bryans said this was confusing consumers, particularly millennials, who, according to one piece of research done in the UK, associated the word dairy with these alternative products, rather than real dairy products.

But Dairy Australia’s human health and nutrition policy manager Melissa Cameron told the conference some of the perceptions around non-dairy alternatives were myths.

People perceived alternatives as a hot market segment that were outstripping the growth of dairy milk and that consumers were ditching dairy for non-dairy alternatives.

But this was not the case.

There were 201 alternatives to dairy on the market—and all were vying for consumer attention.

But total white milk (fresh and UHT) consumption in Australia continued to grow, as did consumption of non-dairy alternatives.

Dairy milk made up 93 per cent of supermarket sales of milk and alternative products.

The market share of alternatives had grown by just 2pc since 2007, up from 5pc to 7pc.

Ms Cameron said rather than ditching dairy for alternatives, many consumers were buying both.

The truth was that only 5pc of consumers bought only alternatives, with 31pc buying both, 62pc buying dairy only and 2pc buying neither.

Buyers of non-dairy alternative were more likely to be city-based, female, and aged 18-34 with children at home.

Nutritionist Dr Anneline Padayachee told the conference changing demographics in Australia would influence the markets for dairy and non-dairy alternatives.

Most of the population would soon be millennials or younger, while an increasing proportion was either first or second generation migrants, many of whom were lactose intolerant.

A functional thirst quencher was a liquid that was drinkable and had functional benefits, such as lowering cholesterol, boosting energy levels, slowing ageing or being lactose or gluten-free.

Plant-sourced drinks were seen as having health-promoting components such as dietary fibre, minerals, vitamins and antioxidants.

Dr Padayachee said alternatives were perceived to appeal to specific users, such as fitness fanatics, the “in kids”, vegans and vegetarians.

Ms Cameron said although people perceived animal welfare and sustainability were the drivers for people to switch from dairy, Dairy Australia research revealed this applied to only a small group.

The key drivers were alternatives were seen to be healthier, people liked the taste or had a dairy intolerance.

Part of the solution lay in accurate labelling— the industry needed to challenge dairy names and images being used in plant-based products.

Although plant-based dairy-alternative products could not be sold within the European Union and Britain under names including milk, butter and cheese, the industry had to keep fighting to have those regulations enforced.

The industry also needed to address the belief that dairy and livestock did not have a place in the world.

But there was no point in arguing with vegans.

“We have almost a religion and an ideology around plant-based,” she said.

“I would never say go and fight with vegans, there’s no point.

“They’re vegans, they’ve chosen their ideology for their reasons, but what we need to do is to get to the people who still want to have dairy, who still love dairy but who are feeling guilty about it because of all the things they see.

“We have to remember it is a social world.”

The dairy industry also needed to change the way it talked to consumers to connect more with them and to be useful to them.

“There’s this perception that the plant-based beverages are healthy and more natural than dairy,” she said.

“But when you look at the ingredients list on plain cow’s milk — it comes out on top with one single, natural ingredient.

“And this is a real paradox because consumers often cite naturalness as an important criteria to them when choosing their foods.

“Milk contains eight essential nutrients, however, with a single ingredient are consumers able to recognise the nutritional value on offer compared with the long list of ingredients and added nutrients you see on alternatives?”

Ms Cameron said the cheap price of plain white milk might also be contributing to consumers being unaware of the “nutritional powerhouse on offer in milk”.

“But the nutritional benefits (of dairy) are off the scale - that’s what you guys have,” she said.

“And that’s what you have the ability to change consumer perception and take your product from just being $1 a litre to being a hell of a lot more valuable.

“You are a Porsche so stop positioning yourself as a Toyota.”

“We need to change the perception of just being a commodity to being an apple a day keeps the doctor away,” she said.

“It’s not just an apple a day that keeps the doctor away — a glass of milk a day can keep me from going into an old age home for a long period of time.”

Ms Cameron said there was a lesson for the industry in the butter/margarine fight.

Butter consumption fell dramatically from the 1950s as margarine was promoted as a healthier product, but began rising in 2005 and now surpassed margarine.

This was done through work on repositioning dairy fat and the message, based on sound research, that the link between dairy and heart disease was a myth.

Milk could be promoted as natural, for it provenance (for example, grassfed milk) and having less or no sugar.

It was vital to move away from being a commodity.

“We fight against commodification not by telling our consumers they are wrong but by finding the things that really drive their need and then meeting those needs.

“And not pricing on what it costs us to produce it, but pricing it on what value it has to those consumers.

“The more value we add to a product, the more people are prepared to pay.”

Ms Clark Reynolds talked about examples of this in the NZ beef industry.

Beef pericardium, previously a waste product that was sold for pet food, now sold for $2500 a kilogram to be used to create a medical product to help repair human hearts.

Collagen (gelatine) was sold as a premium beauty product.

The NZ beef industry had found grassfed was really valuable to consumers.

“If you have attributes that consumers want, you can price it that way,” she said.

The dairy industry shouldn’t be afraid to tell consumers about the attributes that they might not know about, such as milk being gluten-free and antibiotic-free.

“And I think sometimes we forget that.

“We forget that it is about the food. It is about me as a consumer buying food because I love my family.

“Let’s remind people this food is produced with love and it’s bought by people who give it to the people they love.”