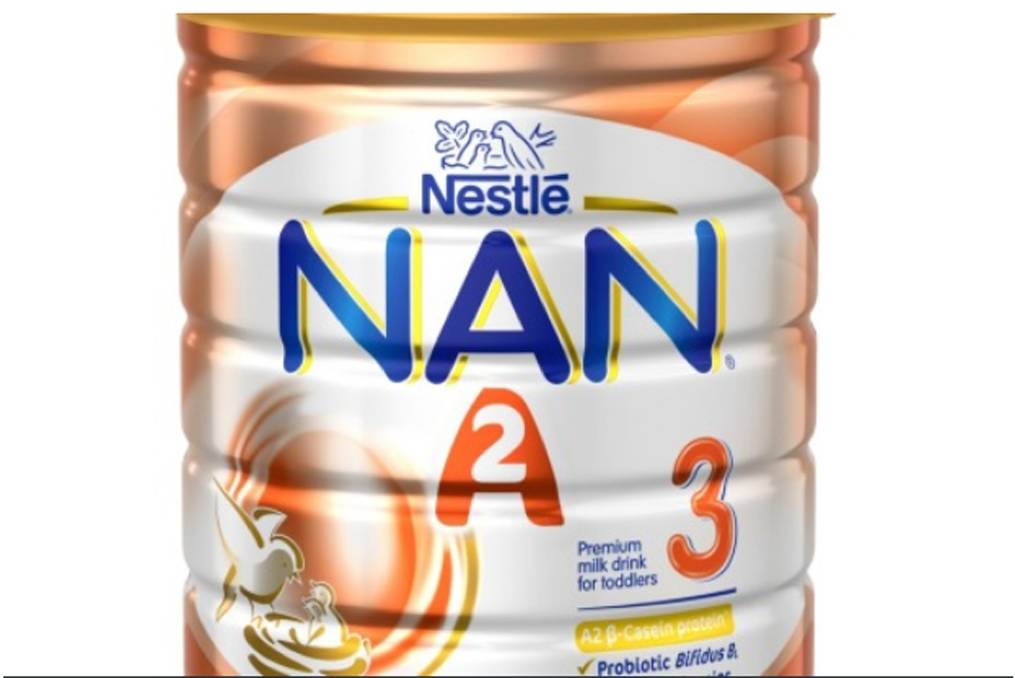 Nestle's new baby formula brand Nan A2, is launching in Australia in October and New Zealand in November.

The world's biggest infant formula maker Nestle is launching its own brand of A2-only baby formula in Australia and New Zealand as it looks to muscle in on the dominant position of high-growth stock, The a2 Milk Company.

The world's biggest infant formula maker Nestle is launching its own brand of A2-only baby formula in Australia and New Zealand as it looks to muscle in on the dominant position of high-growth stock, The a2 Milk Company.

While many dairy makers have held back from selling products that only have the A2 beta-casein protein, perhaps sceptical about its benefits and cautious of undermining their regular milk sales, a2 Milk has proved to be a huge growth story. Revenue has surged from $NZ62.5 million in 2011-12 to $NZ923 million in 2017-18. The company's market capitalisation has swelled to more than $7 billion.

Now the Swiss giant wants in on the space and is launching its NAN A2 brand in Coles and online in Australia this week. It has plans to sell its S-26 Atwo brand in New Zealand in November at select Countdown stores and online.

A2 milk contains all of the proteins found in standard cows' milk except for the A1 beta-casein protein. Proponents of A2-only milk say the A1 protein causes indigestion.

This major push by Nestle comes on the back of its launch into China in February with its Illuma Atwo formula brand. The NZ and China formula products are Wyeth Nutrition brands, while the Australian product is labelled Nestle Nutrition.

Nestle's global business head for Wyeth Nutrition Tarun Malkani told The Australian Financial Review it was still early days in China but wat is performing to expectations, while Australia is also an important market.

"We are going to win [market share] on the strength of the brand," he said.

"It comes down to the power of the brand. In this case it happens to be the A2 offering, but its still about the brand.

"The A2 beta-casein protein is the original form of protein before cows were domesticated thousands of years ago. And now cows have both the A1 and A2 proteins. So we are going back to the original manuscript.

"But at the end of the day, we have to make sure consumers have a choice.

"This is a viable lead in the market and consumers have asked for it, so we have a responsibility to give them an option along with the other options in our portfolio."

The company offers product from starter formulas to toddler milks and cereals.

Citi analyst Sam Teeger said Nestle backed-Wyeth had the largest share of the infant formula market on Chinese e-commerce platforms in 2017 of about 10 per cent, making its entry into the A2-protein category currently dominated by the Jayne Hrdlicka-run a2 as significant.

Another analyst said there will be some nerves around this Australian A2 launch but a2 Milk has a first-mover advantage and "premium platinum status".

"[For] top brands like a2 and Aptimil, it appears very hard to get product Australia-wide right now," Mr Teeger said.

But it is Chinese mothers who have fanned the company's success further. China has one of the world's lowest breastfeeding rates.

Mr Malkani said early success in China had confirmed demand for the product and underlined the decision to expand into new markets.

"This gives us reason to believe this is not a gimmicky flash in the pan," he said.

"This is something consumers have a need for and that is why we have taken the step to go outside China to other markets."

Mr Malkani is mulling the entry of A2 product in the United States, along with other countries.

"If we believe the dynamics in the market suggest that A2 is a viable option, then we will put the energy behind this," he said.

Mr Malkani said he along with all other baby formula makers are awaiting more detailed news from Beijing around China's new e-commerce law set to come into effect on January 1.

At the end of August, the Chinese government passed a new law providing the framework to e-commerce trade covering operators, contracts, dispute resolution and promotion for domestic and cross-border transactions (CBEC).

The law covers larger platforms such as Alibaba's Taobao but also those selling goods via social networks like WeChat.

"Certainly China is very important to us," Mr Malkani said.

"We recognise the government wants to ensure their growing e-commerce channels are operating appropriately.

"We don't have any specific details now of this law, I don't believe anyone does. But we appreciate the importance of it and we will monitor it closely."