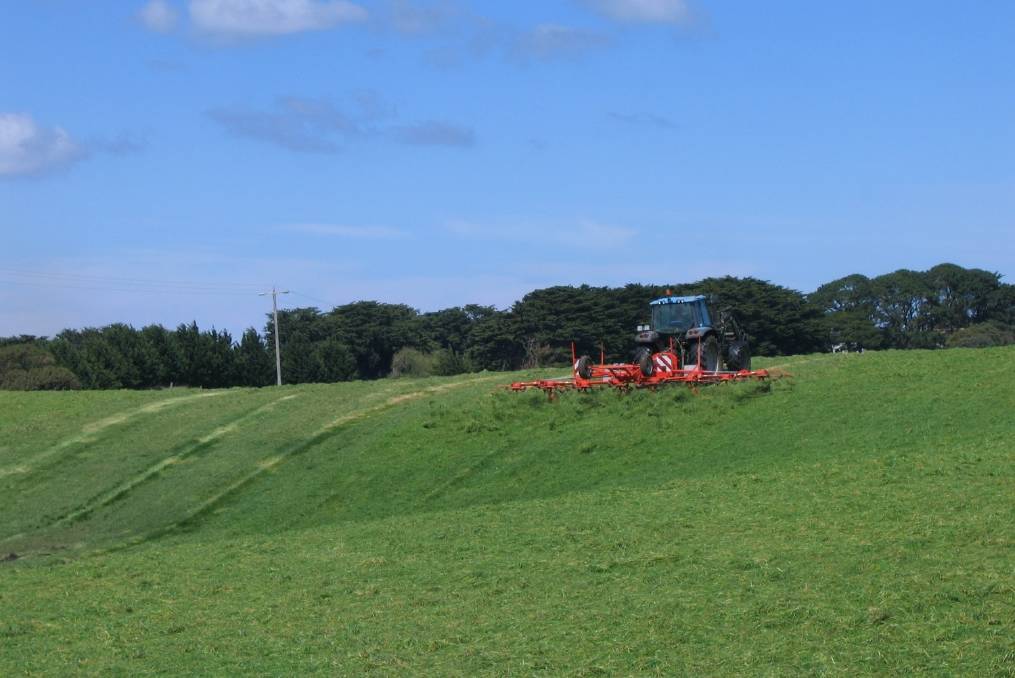 If some silage making rules are bent or broken, it can affect the environment.

If some silage making rules are bent or broken, it can affect the environment. The could be by contaminating the soil, producing effluent and run run-off, releasing volatile gases into the atmosphere or blowing plastic into the next door neighbour's farm or into town.

1. Cut earlier than later: If forage is cut early in the season and at or near early canopy closure, these paddocks will usually not miss a rotation. The silage will have high nutritive value and be palatable to stock, providing it is not affected by rain or dirt or left on the ground for too long. Paddocks will recover quickly and densely, just as if they had been grazed.

The is great for the environment as potentially heavy rains will not hit vegetative pastures with good leafy cover and less inclination for soil being washed out of paddock and no silage left on the ground to rot.

Forage cut three to five weeks later will be less nutritious, more bulky (due to increased fibre in the stems) and pastures will be much slower to recover with less density. Open pastures are vulnerable to soil and nutrient loss in heavy rains and summer weeds just love bare ground.

2. Harvest in the correct dry matter range: Stack silage should be harvested in the 30 to 35 per cent dry matter (DM) range and baled silage in the 40 to 50 per cent range. If either is below these ranges, a poorer fermentation occurs, often with environmentally unfriendly effluent being produced. In addition there are losses in DM and quality of the forage during fermentation but it also releases more detrimental gases to the atmosphere and unpleasant odours.

Silage additives applied at the pick-up are beneficial in forage that is being ensiled at just under the desired DM contents mentioned above. This could be due to unforseen rain or a heavy crop.

Harvesting forage above their respective ranges will often result in mould and yeast growth in the silage due to too much air being entrapped between the dry material. This often results in spoiled silage either left at the stack or in the paddock, eventually breaking down with gases of deterioration entering the air.

3. Harvest within one to two days: Once mown, pastures continue to respire or 'live', so its nutritive value starts to decline. This reduction in quality increases substantially from day three onwards. So use a tedder soon after mowing or a mower-conditioner to increase the rate of wilting.

Obviously earlier cut forage is more nutritious so it will be relatively higher in value after three to four days compared with later cut forage. However, more silage of lower quality will need to be eaten to achieve the same production as higher quality silage and result in more poop and piddle in the paddock, yards and laneways, contributing to heavier loads in the effluent system.

4. Seal quickly and airtight: Stacks should be sealed airtight as soon as harvesting is completed. The rolling tractor(s) should have been keeping up with forage delivery. If harvest completion is later in the night, do the final roll then drag on the plastic and place tyres, sausage bags or soil around the perimeter to minimise or preferably, prevent air entering overnight. Rolling the next day just pushes more air into the stack.

Many stacks are covered but not sealed airtight. Mould under the plastic sheet indicates poor sealing.

Baled silage should have the stretch wrap plastic applied at baling and no later than one to two hours. The bales must be covered with at least four layers of film, preferably six at the correct pre-stretch (55 per cent or 70 per cent) and with 50 per cent overlap. No windows should be visible as oxygen will infiltrate much quicker than with four layers, leading to mould growth, gas production, spoiled silage.

Development by manufacturers of stretch wrap film continues to improve the quality of the films, the latest being oxygen barrier film being integrated into stretch wrap film. These latest films provide a better and tighter seal on the bale reducing the extent of oxygen permeating into the bale.

5. Regularly inspect silage storages damage: Regularly inspect silage stacks and bales for damage and repair as soon as possible. It is handy to have a roll of silage specific tape in the ute, mule or four-wheel bike so there are no excuses. If holes are noticed ù clean the area around the hole, wipe dry if wet and use a similar colour tape to the holed plastic. Avoid patching if the plastic is hot. Dark and light coloured plastic will heat and cool at different rates.

A major downfall on many farms is that holes, caused by many means, are not repaired quickly enough, if at all. This leads to yeast and mould growth, undesirable gases hit the airways and in wetter silages or if drier silages decompose over enough time, polluting effluent will be produced.D