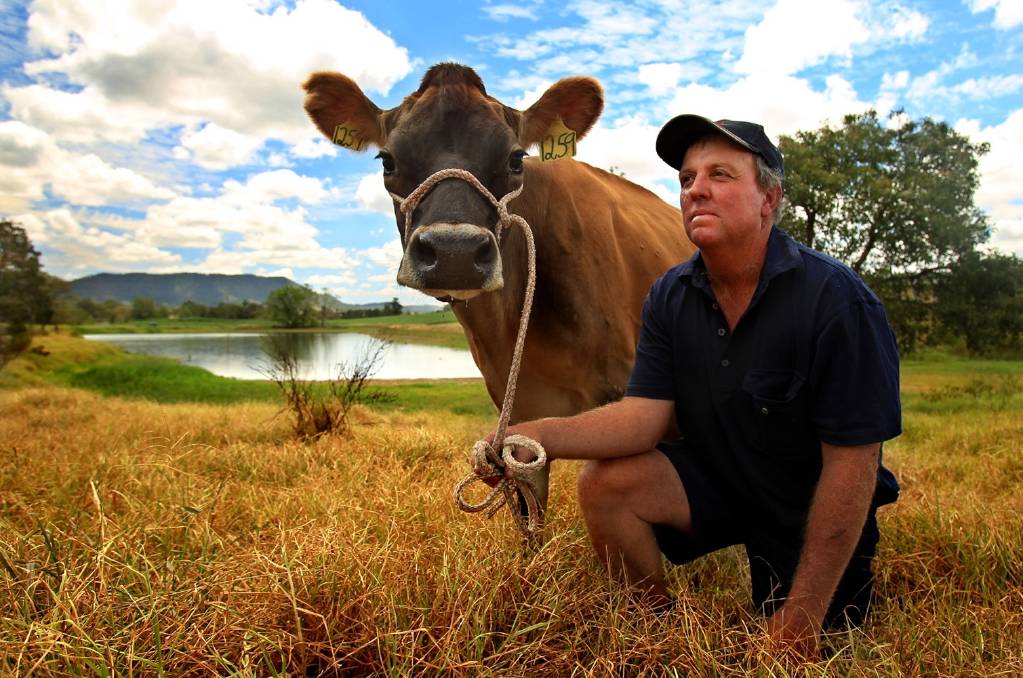 David Williams on his Vacy property. When his father started dairy farming in the Vacy area more than 60 years ago there were more than 50 farms. Now the Williams farm is the only one.

THE Hunter Valley's 106 dairy farms are under pressure after the loss of more than two-thirds of all farms since deregulation in 2000, the closure of another four farms in 2016, and mining and urban encroachment that has led to questions about the industry's long-term viability.

THE Hunter Valley's 106 dairy farms are under pressure after the loss of more than two-thirds of all farms since deregulation in 2000, the closure of another four farms in 2016, and mining and urban encroachment that has led to questions about the industry's long-term viability.

"If we keep losing farms, we won't have enough to keep the industry going," NSW Department of Primary Industries dairy technician specialist Kerry Kempton said on Thursday after a NSW Dairy strategic plan identified a "critical mass of farms in some dairy regions" as a key problem facing the industry.

But in the Hunter the loss of farms, severe growth constraints placed on many that remain, years of negative profitability for marginal operations and a 10 per cent cut in milk prices in 2016/17 will mean a tough year ahead for some farms, and questions about the industry's future in 10 years, Ms Kempton said.

"Some people will struggle this year," she said after a NSW Dairy Farm Monitor Project report in December showed dairy farms in the state's north, which includes the Hunter, made an average net farm income of just $9788 per year over the past five years.

For two of the five years the average was negative, meaning many farms made a loss after debt servicing and leasing.

The $9788 represented "what was left to reinvest in the business", Ms Kempton said.

The years of break even, or negative, profitability for a large number of Hunter farms, and a dramatic drop from 350 farms in 2000 down to 106 in the Hunter and Gloucester in 2017, have long-term consequences as the region tries to meet growth targets set in a 2016 NSW Dairy strategic plan.

Rather than building up herds and expanding, some farmers could be forced to sell cows in 2016-17 to keep up cash flow, and while dairy cattle prices were high, Ms Kempton said.

Others could sell their asset, and because the Hunter was a high land value area and the region's farmers generally had low debt levels, they would leave the industry with substantial sums.

"It's not always a negative story," Ms Kempton said.

Vacy farmer David Williams said the loss of another farm would further fragment the industry.

"There were about 50 dairy farms around Vacy when my Dad came here. We're the only ones left now."

The story is repeated across the Hunter.

Dungog Show committee president Dugald Alison said there were several hundred dairyfarmers in the area in the 1960s when his family had farms, but the show's grand parade has not included dairy cows for four years.

"There's not enough money in dairyfarming these days," he said.

The show has had to diversify to continue running despite the marked drop in agricultural activity in the past few decades, with demolition derbies, pig and dog races and the RoofTop Express arena spectacular to bring in the crowds at the 123rd show in November.

In the once rich dairyfarming area of Jerrys Plains there is now just one dairy farm.

Owner Rita Gee told the media in 2011 that milk price battles, wild weather and mining encroachments meant many farmers were questioning whether life on the land was worth the trouble.

She doubted if a sixth generation would run the farm.

After deregulation in 2000 dairyfarmers were affected by world prices.

By 2011 the number had dropped further to 125, producing 16 per cent of the state's milk worth $170 million to the NSW economy, according to the Department of Primary Industries.

The state's largest single farm, at Forbes, has 6000 cows.

The farm supports three generations of the Williams family.

Farms generally had to grow larger to provide the efficiencies of scale required to remain profitable, he said.

"You're looking for cost savings all the time," Mr Williams said.

"I don't mind it, but it can be very tough. There are some families that just become slaves to it."

This year most Hunter farmers will experience price cuts of up to six cents a litre, or about a 10 per cent cut.

While grain costs have halved and cattle prices have risen, Mr Williams still expected 2016-17 to be a break-even year.

He was aware of one farm that was already reducing workers.

During the mining boom dairyfarmers struggled to employ workers because of the high wages paid by mines, and struggled to expand because mining meant "land prices were getting ridiculous".

Urban encroachment in rural areas like Dungog, Paterson and Gresford is also a problem for the industry.

"There's a lot more people living in rural areas, and all those issues put more and more pressure on farms," she said.

Ms Kempton said she remained positive about the future, despite Hunter milk volume going down in the past year, and a Dairy Australia report in October predicting that overall milk production in Australia would remain "constrained as farmers defer investment and focus on management to break even points".

A strong consumer backlash to the supermarket "$1 milk" price wars was heartening for farmers, she said.

"It's demanding and intensive work which is why there's predominantly families in the industry," Ms Kempton said.

"They're prepared to put the extra time in and the long hours.

"You've got to put a lot of sweat equity into the dairy business."