Mark and Sam Billing already have a high profile in the dairy industry with their farm straddling the busy Princes Highway near Colac. 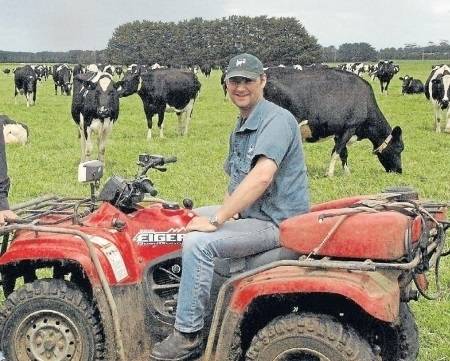 Dairyfarmers Mark (pictured) and Sam Billing, Colac, are excited to have been named Legendairy Farmers at the Great South West Dairy Awards.

Mark and Sam Billing already have a high profile in the dairy industry with their farm straddling the busy Princes Highway near Colac.

Farmers passing by tend to look over the fence to see well-maintained cows, trials taking place in the paddocks, students being hosted on farm visits and new technologies being tried.

Now the Billings have been recognised further by being named as the inaugural Legendairy Farmers at the Great South West Dairy Awards.

It’s a responsibility and honour they take seriously.

Mr Billing said they were “honoured but a bit shocked” by the award after earlier being named as the Farm Business Managers and the Employers of the Year. Now they are determined to live up to the title.

“There’s a bit of responsibility that goes with winning that and we’re right on the highway west of Colac so we try to farm best practice and set a good example,” Mr Billing said.

“We don’t farm for what people think; we farm for what suits the way we want to farm, but people drive past and can be critical or otherwise.

"Luckily the feedback is positive and the Billing family has successfully farmed the land for four generations, with no plans to sever the ties that date back to the 1920s.

“Dairying is in our blood."

The couple, who have four children aged under nine, work as a partnership called 'Craiglands' – an ancestral family name – along with one full-time, two part-time and one casual employee.

The farm has grown from small beginnings 90 years ago to milking 452 Holstein cows off about 240 hectares.

So what makes a 'Legendairy' farmer? That’s one question that stumps Mr Billing.

“I’m not really sure,” he said, “Both Sam and I have an interest in the industry but we’re also interested in giving back to the industry.”

The farm regularly hosts pasture trials and other research projects. More than 200 Melbourne school students will get a taste of dairying on the farm this year.

The Billing farm embraces new technology. All cows have activity monitoring and about 100 of the herd have eating behaviour monitors. A differential feeding system is used to feed taking into account production, body condition and state of lactation.

"We’ve set up a robust system to ensure the farm gets the best returns and remains profitable, no matter what the weather or farm prices might throw at us,” Mr Billing said.

While dairying was in Mr Billing's genes, Mrs Billing came from inner-city Richmond. She did an Agricultural Science Degree at Dookie and was working as a Department of Agriculturesheep officer at Hamilton before she met Mark and converted to the dairy lifestyle. She also has a Masters in Agribusiness.