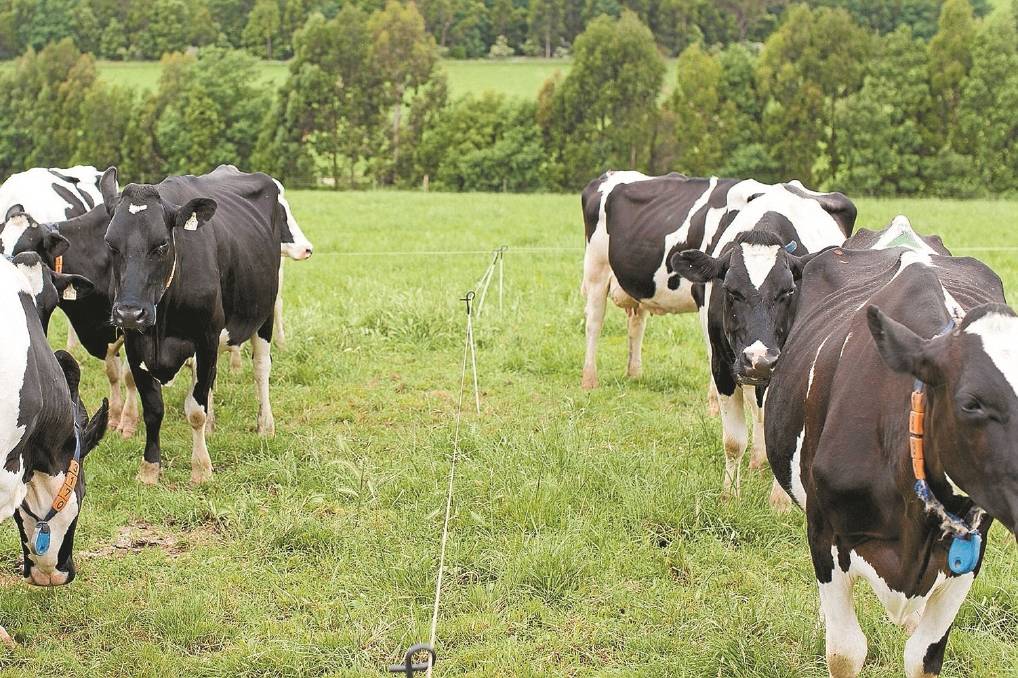 One of these groups of cows eats less feed to produce the same amount of milk — but the difference can only be identified through Australian genomic technology. These cows, at the Victorian Government’s Ellinbank Centre, form part of the reference population for the new Feed Saved ABV.

A NEW Australian genetic breeding value will help Australian farmers breed a herd that produces the same amount of milk for less feed.

A NEW Australian genetic breeding value will help Australian farmers breed a herd that produces the same amount of milk for less feed. The new Feed Saved Australian Breeding Value (ABV) is the result of eight years of research and development by the Dairy Futures Cooperative Research Centre (CRC).

Dairy Futures CRC chief executive Dr David Nation said the Feed Saved ABV was the world's first feed efficiency breeding value that incorporated real feed intake data as well as a prediction of feed required for maintenance. "This is the first practical use of genomic tests to measure a trait that can't be routinely measured on farm, and the start of more extensive genomic testing to improve the range of traits important to dairyfarmers," he said. "Visually, you can't spot a highly feed-efficient cow, but farmers can now breed for it."

The Feed Saved ABV was published for the first time in April by the Australian Dairy Herd Improvement Scheme (ADHIS). It is included in the Good Bulls Guide. All of the new ADHIS Australian selection indices — the Balanced Performance Index, the Health Weighted Index and the Type Weighted Index — include the Feed Saved ABV trait. It replaces liveweight in the indices.

Dr Nation said the Feed Saved ABV would be relevant to all the feeding systems that dairyfarmers used in Australia.

"The Feed Saved ABV allows farmers to breed cows in a new way: by reducing their maintenance requirements for the same amount of milk produced," Dr Nation said.

"Introducing the Feed Saved ABV creates a future where we can keep selecting for feed efficiency. Up until now, feed efficiency was delivered by bigger cows with sharp increases in milk production that increased faster than feed intake was increasing.

"This isn't sustainable, as these larger cows now have a greater feed requirement for maintenance, and production can't keep increasing at the same rate. The Feed Saved ABV provides a solution where farmers can now identify sires and cows that require less feed for the same amount of milk produced. They literally save feed."

In other breeds, Feed Saved is calculated based on just the maintenance requirements predicted from the type traits.

How the feed-saved ABV works

At this stage, reliabilities for Feed Saved ABV are lower than production traits at about 35% but this will improve as 120 new cows are added each year to the population being studied for the trait and more data is obtained from international collaborations.

Feed represents about half of a typical dairy farm's variable costs, so any opportunity to reduce feed is valuable to dairy farm businesses.

Some bulls can save at least 100kg of dry matter per cow per year.

While this might only equate to a quarter of a bale of hay, when multiplied across an entire herd and compounded year-on-year, the savings add up.

"It'll like putting less petrol in a car for the same distance," Mr Anderson said.

"But feed efficiency has got to be in balance with other productivity traits. When going for something new, we're only tweaking the breeding program, but if I can get a couple of one per cent savers going my way than that might be the difference in using a bull in a breeding program."

Aubrey Pellet, Hill End, Vic, said the Feed Saved ABV was important. "Beyond the cost of growing grass, purchased feed is my largest cost," he said.

"So if I can breed a herd of cows that gives me the ability to reduce my feed costs, it will go directly to the bottom line, and it may give me the option to maintain feed costs and increase production."

Ron Paynter, Ellinbank, Vic, said he would not use the Feed Saved ABV directly in how he selected sires for his farm business, but it would have an impact because it was included in the three new breeding indices. "It will filter through," he said. "The thing that I'm really interested in on our farm is profitability, so I'll be focusing on the index that focuses on profitability and know that the Feed Saved ABV is built into it."

Con Glennen, White Star Jerseys, Noorat, Vic, said the genomic breeding values were exciting and when a more reliable Feed Saved ABV was available for Jerseys, there was "no doubt" he would consider it in his breeding decisions.

She said although the efficiency of dairy cows in terms of milk production per kilogram of liveweight had doubled since 1950, largely through selection for improved production, the missing piece of the puzzle had been knowing exactly how much cows ate for any given level of production.

"So there may be cows that produce the same amount of milk that eat more or less feed," she said. "Our research started at that particular point: identifying those animals that are the best converters of feed into product.

The research involved using feed bins fitted with electronic identification tag readers mounted on load cells. Animals were then fed lucerne cubes in these bins — with the amount that each animal ate recorded by the readers.

In both experiments, the researchers were looking for the difference between what the animal ate and what it was expected to have eaten given its size/maintenance requirements and its growth or milk production.

The research was conducted on heifers at Rutherglen, Vic, and Taranaki, New Zealand, and cows at Ellinbank, Vic. Collaboration with overseas research groups provided dry matter intake records for an additional 1000 cows.

Dr Pryce said genomic selection technology was then used with the data from the experiments. "Because you can only measure feed intake with a relatively small population, genomics helps you to relay the information you get to the wider population," she said.

This could then be applied to any Holstein animal for which there were genetic markers, such as genotyped dairy bulls used for artificial breeding.

Dr Pryce said the other important part of the Feed Saved ABV was that it took into account maintenance requirements.

Feed Efficiency in other countries

But it is totally different to the Australian Feed Saved ABV as it is based on an estimate of milk production minus the cost of feed used for maintenance. D