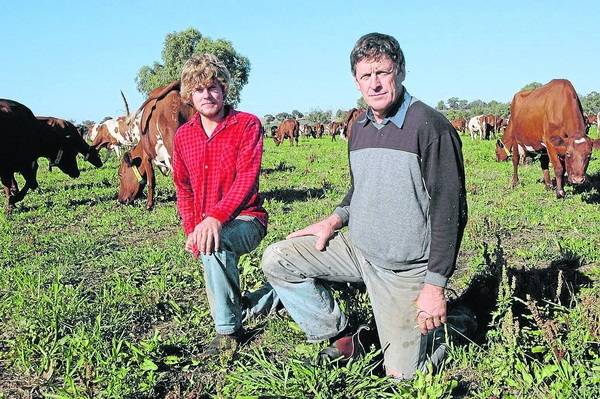 Damien and Warren Doecke have been at their Woods Point farm for about six months now since moving from their previous farm on the eastern side of the Swanport Bridge. Warren said they wanted to stay local because he believes the Murray Bridge area is the best place in Australia to milk cows.

WITH the rehabilitation of the Murray river flats in the mid 2000s, dairyfarmers around Murray Bridge in South Australia who continued farming on the banks of the river had the option to buy up and expand.

WITH the rehabilitation of the Murray river flats in the mid 2000s, dairyfarmers around Murray Bridge in South Australia who continued farming on the banks of the river had the option to buy up and expand.

But the Doecke family did not have such an option – they were landlocked at their old farm on the eastern side of the Swanport Bridge.

To the north, there was the South Eastern Freeway. Look south and west – it is the mighty River Murray. To the east, Rinpra Produce.

There was simply no way to expand the 75-hectare farm they had occupied for 20 years.

And with Warren and Cheryl's son Damien eager to pursue a career in dairying, thus justifying the desire to grow, only one option remained – buy up elsewhere.

But Warren did not want to stray too far from Murray Bridge.

"In my opinion, this is the best place in Australia to milk cows," he said.

"Climate-wise it's good for the cows and you've got water for irrigation."

Their answer was found at what was a decommissioned dairy farm across the river at Woods Point, previously run by the Stewart family.

But another challenge presented itself in the fact that the Doeckes run an organic dairy, supplying milk into B.-d. Farm Paris Creek.

The venture began when they started to see the benefits of using alternative fertilisers, so they started looking at doing things differently by farming biologically, rather than using chemical fertilisers.

"Cow health improved, so it got to the stage where the next step was full organic certification," Warren said.

"By doing that we have been able to attract a slight premium and a more stable price for our milk."

They had worked hard at the old farm to bring that up to organic standard and had been pursuing that venture for five years.

After some background research on the new farm, they found little evidence of recent chemical use.

The Doeckes supplied milk to United Dairy Power for a few months while they waited for organic certification, and were eventually given the all-clear.

The new property comprises a 50-unit rotary dairy with 175 hectares of flood irrigation, 30ha of permanent irrigation, and another 340ha on the other side of Jervois road for organic cropping and hay production.

It is a big step-up from the old farm – a 12-unit double-up herringbone dairy with 40ha of swamp, 15ha of permanent irrigation and 20ha of non-irrigated highland.

About 250 cows – all Illawarras – are being milked through the new dairy, with plans to increase to a number not yet set.

"We want to expand, but we want to do it organically and be self-sufficient in fodder," Warren said.

"Moving here was all about being self-sustainable, especially if you're producing organic milk as it is hard to find organic feed."

Another aspect to the Doeckes move to Woods Point was to consolidate their operation, selling land they had at Meningie where hay and grain was produced for the dairy to concentrate the enterprise in one location.

But one of the biggest reasons they chose the new location was to grow as much grass as they could.

"There is a lot of lucerne on the swamps here," Warren said.

"The herd has been on lucerne and millet over the summer and now we are oversowing that with a winter mix."