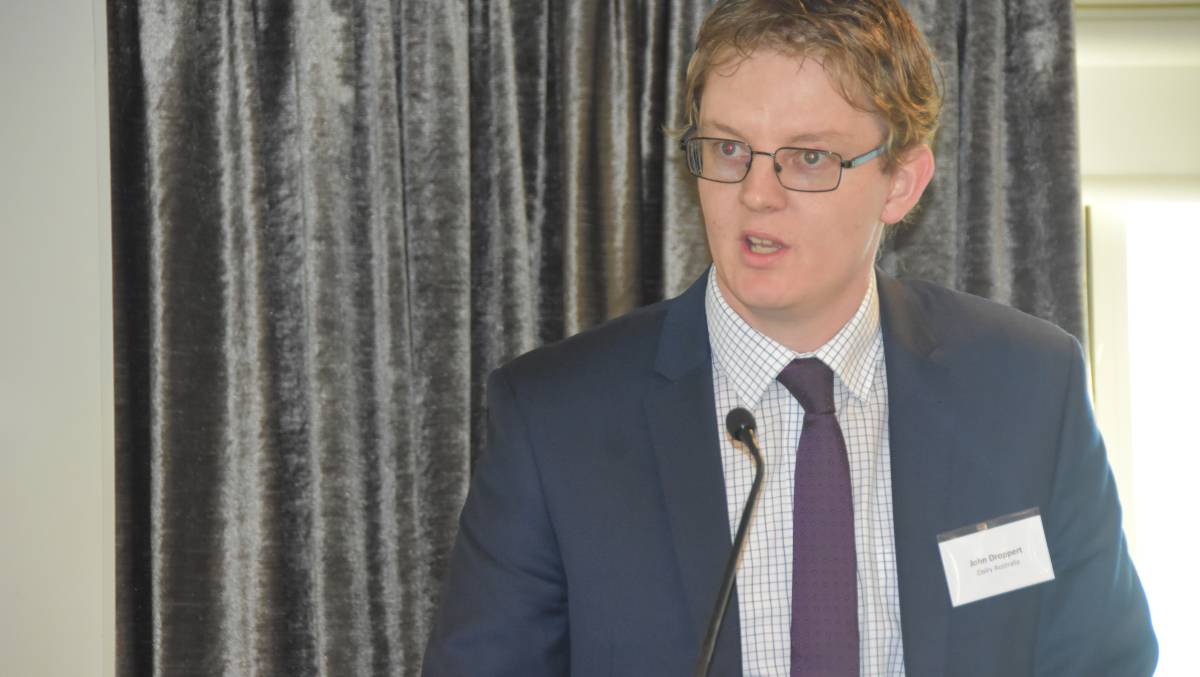 POSITIVE OUTLOOK: While the outlook for the dairy industry is generally positive, there are some issues that will need to be watched, according to Dairy Australia senior analyst John Droppert.

The relationship between milk price and confidence has been severed, according to a leading industry analyst.

While the outlook for the Australian dairy sector is positive, it is still being affected by a hangover from unhelpful international and local concerns, according to Dairy Australia senior analyst John Droppert.

Mr Droppert provided further information on this year's DA Situation and Outlook report, which is predicting a further drop in milk production of between 3-5 per cent, to 8.1 to 8.3 billion litres.

He said international factors, as well as local conditions, were contributing to some uncertainty in a commodities market for which the outlook was generally positive.

"There's the impact of African swine fever, trade wars, actual wars, the Middle-East and what's going on in the Gulf in particular, how many drones get shot down, how many oil tankers get blown up," Mr Droppert said.

"The market doesn't like volatility; it could throw a spanner in the works."

That was against a backdrop of well balanced global commodity markets, supported by a 3.2pc increase in global dairy demand in the past year and growth in key markets such as greater China and South-East Asia.

Domestic dairy consumption in Australia also remained robust, with per capita consumption amongst the highest in the world.

Mr Droppert said Australian dairy farmers were reaching the end of what has been an exceptionally challenging season, but that positive signs were emerging.

"Positive domestic market trends, stronger global markets and a weaker Australian dollar have supported higher farmgate pricing this season and look set to deliver further increases over the next 12 months.

Feed costs were likely to remain high, until there was a "solid read" on this year's harvest.

Mr Droppert said there was anecdotal evidence of farm exits and cow culls, especially in northern Victoria, could be higher than predicted.

"It's not something that can turn around in a hurry - confidence does recover pretty quickly, but it's coming off a low base," Mr Droppert said.

"We have this hangover, we can't just say farmgate prices are great, and it's rained, so cheer up," Mr Droppert said.

"But, notwithstanding that hangover, certainly some things are starting to point in the right direction."

On the world scene, the commodity market was "a pretty good news story", with product selling, while the Australian market was going reasonably well.

"Volume growth has slowed, compared to previous reports, but value growth has continued," he said.

"There is value adding that's out there and happening.

"It's not just price increases driving value; it's the customers

"They want the 'fit' yoghurt, or the low sugar dairy dessert, or the deli cheese - these things are fairly positive and putting money back into the supply chain."

Mr Droppert said last season was one of exceptionally high costs, which had driven confidence down.

In the Situation and Outlook survey, 64pc of farmers indicated feed shortages and costs were their biggest challenge.

"It wasn't a bad milk price, for the season just gone, but the sort of numbers we have seen for grain and hay prices have been astronomical and eating into margins," Mr Droppert said.

He warned farmers were not "out of the woods yet" when it came to high hay prices.

"There was so much hay sitting around, the mice were eating it, people were thinking of burning it, they couldn't sell it, it was stacked outside, all over the place," Mr Droppert said.

"All of a sudden that rubbish is worth a fortune."

But he said farmers would need to get through to the spring flush before new season's product came onto the market.

The high water price, particularly for northern Victorian dairy farmers, was the other compounding factor.

"What is going on with the water price is a headline indicator - it smashes confidence and it smashes the pocket."

The survey of nearly 800 farmers found only 34pc felt positive about the future - and Mr Droppert said the historical link between confidence and milk prices now appeared to be broken.

"If the milk price is up, you are feeling better, if it's down, you are not feeling good," Mr Droppert said.

"Throwing feed costs on top of that and the relationship between milk price and confidence is probably the furthest it's ever been apart.

"The relationship has been severed, other factors are increasingly playing a role."

Mr Droppert said DA also believed cow cull numbers, reported as being up 11pc in March on last year, were much higher than reported.

"There's a lot higher share of cows going over the hooks, direct to the abattoirs, particularly when that feed shortage started to bite," Mr Droppert said.

"We think the number is much higher than that 11pc.

"We think it's probably more like a 30pc increase, year on year and we think the herd will probably be about 7pc smaller, at the end of this season, versus last season.

"The fundamental impact of that, is of course, on milk production.

"You can't get those cows back; it takes two years.

"So even though when the market situation is improving, farmgate prices are at record highs and even if grain does come off a bit, those cows are not there."

In contrast, the commodity market was one of the things that had been going well.

"Milk supply has been fairly muted."

Milk supply out of Europe had slowed, due to climate and government policy.

"From a supply perspective, markets have been fairly balanced, New Zealand had a fairly positive spring, but it slowed down a bit, towards the end of the season," he said.

"From a demand perspective, it's a good news story.

"We know the fundamentals are strong, but there is a lot of disruption, we need to be conscious of."