We haven't, however, seen combined sheep and lamb slaughter as low as it was a fortnight ago.

With seasonal processor slowdowns, it's not unusual to see low slaughter at this time of year.

In the last month lamb slaughter has fallen heavily. Last week's east coast lamb slaughter was 261,000 head. This is a 37 per cent fall from the seasonal peak in April. 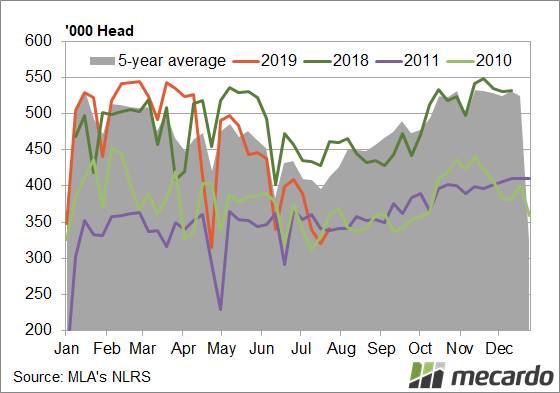 In July last year, sheep slaughter took up some of the kill space left empty by the low lamb supply.

Back then, the 60,000 head lift in sheep slaughter meant that while lamb slaughter hit lows, there was still a combined 450,000 head through processors.

We haven't seen sheep slaughter rise to fill the hole left by lamb this year.

The combined figures for sheep and lamb slaughter have been below 350,000 head.

There have only been a handful of other weeks in the last 20 years when slaughter has been at these levels.

On average, combined sheep and lamb slaughter starts to rise in August, largely due to rising sheep numbers.

Last week there was a lift in sheep slaughter, so this season might be following a similar trend, despite the record low flock.

The lack of rain in NSW this winter might delay the flock rebuild, and see sheep slaughter take up some space at processors.

It would take 100,000 head per week to get combined slaughter back to the levels of last year, and this seems unlikely as the only sheep left are likely to be breeding stock.

It's hard to see sheep or lamb prices easing too far until kill chains are filling up again. This could be by the end of August, but tight supply could feasibly last well into September.