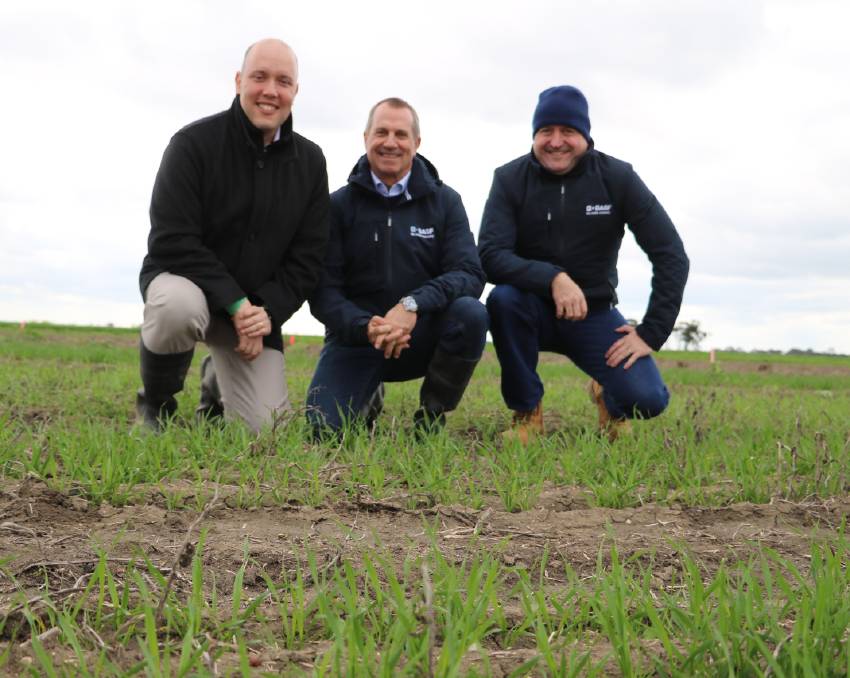 Gustavo Palerosi Carneiro, Gavin Jackson and Rob Hall, all of BASF, at the company's breeding operation near Horsham last week.

BASF is set to launch its first wheat varieties in 2021.

THE INVESTMENT into creating a wheat breeding program at Longerenong in Victoria is set to pay off, with BASF set to launch commercial wheat varieties in 2021, 11 years after the breeding program was set up in 2010.

BASF made the announcement it would partner with seed distributor Seednet to retail the four varieties, which are suited to production in Victoria and NSW.

The Longerenong breeding centre, in the heart of Victoria's Wimmera region, was set up by Bayer, which then divested its Australian breeding assets to BASF last year as part of its purchase of Monsanto.

The Australian wheat launch will be the first wheat varieties the company has released anywhere across the globe.

He said BASF had taken a definite position in terms of what it was trying to achieve with its wheat breeding program.

"It's about yield, yield, yield, we really believe yield is king and we're looking to combine this with a good disease resistance and quality package," Mr Hall said.

The varieties will be higher milling quality spring wheats.

Gavin Jackson, head of agricultural solutions BASF ANZ, said he was thrilled to see the move into wheat breeding come to fruition.

"The new varieties will be the culmination of around nine years of research at BASF's Wheat and Oilseed Breeding Centre," Mr Jackson said.

"We started investing in our breeding program in 2010 and opened our facility in Longerenong in 2014."

During a recent visit to Longerenong Mr Hall said the business's oilseed program was also ticking along well.

He was particularly upbeat about next year's launch of a variety Invigor 4022, a new TruFlex variety of canola featuring BASF's PodGuard technology.

TruFlex is a next generation genetically modified technology which allows for later application of glyphosate-based herbicides.

PodGuard is a system that has been designed to reduce pod shatter, helping farmers to leave canola for longer without the risk of pods shattering and dropping the seed to the ground.

"We think this new variety is going to be really popular among growers," Mr Hall said.

"You can leave the canola standing until 90 per cent colour change before harvest or windrowing which gives you a lot more flexibility."

"This is an important space for us, we understand there is a very volatile climate but globally the business understands how Australia works and we are very happy to be here."