The Australian wool market is in danger of becoming a casualty of the US-China trade war. 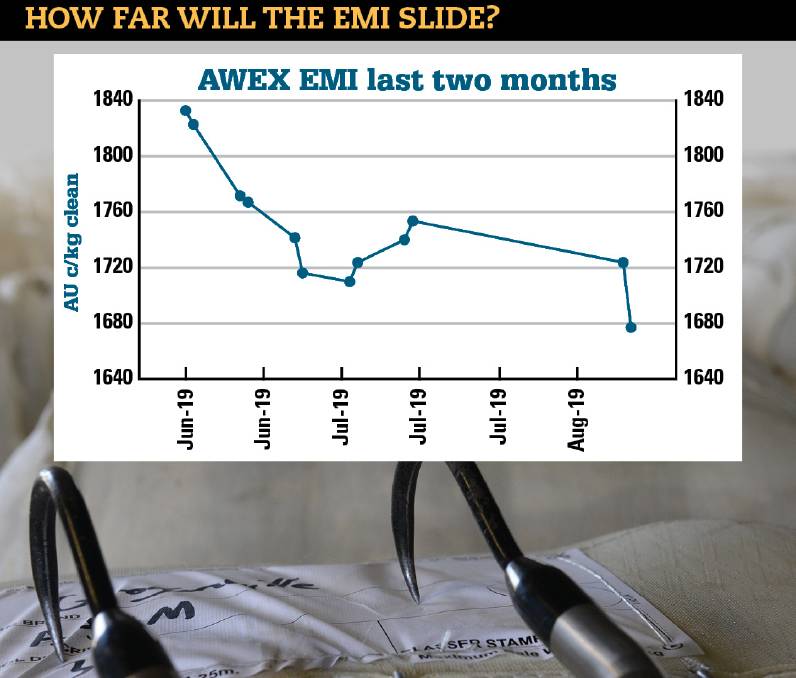 WRONG DIRECTION: The US-China trade war has sent the Australian wool market southward with the EMI dipping below the 1700c mark last week.

The wool market has fallen victim to the US-China trade war with the benchmark eastern market indicator (EMI) plunging to 1676 cents a kg clean by the close of sales last week.

The EMI shed 78c in a horror start to wool sales after the three-week winter recess during which sale activity dwindled alarmingly as US President, Donald Trump, ramped up his trade threats on Beijing.

What a difference a year makes with the EMI sitting at a record 2116c this time about 12 months ago with suggestions it could zoom to 2500c.

A total 43,697 bales are rostered for sale in Melbourne, Sydney and Fremantle this week with high pass-in rates expected if prices don't show signs of recovery.

During the coming month 146,880 bales are scheduled for sale.

The market fell last despite the prospect of reduced supplies because of Australia's shrinking Merino flock and a favourable currency movement in the Aussie dollar, particularly against the US greenback.

The Australian Wool Testing Authority has so far this season tested 16 million kg of wool, almost one million kg less than the same period last year.

Demand had also evaporated for drought-affected wool from northern NSW.

Chris Wilcox, executive director of the National Council of Wool Selling Brokers of Australia, said yet again a "super cycle" of high wool prices during the past 30 years had been disrupted by factors outside the industry.

The great wool price crash of the early 1990s, which brought down the floor price scheme, had its genesis in China's Tiananmen Square massacre in 1989 and the unravelling of the Soviet Union in the late 1980s, he said.

Since then periods of high prices had been badly affected by other global issues including the outbreak of SARS disease in the early 2000s which hit Asian economies and a major cotton glut about a decade later.

Now the China-US trade war was weighing heavily on wool demand - and the global economy - with no easy fix in sight.

"We had a bloody good run for two years," Mr Wilcox said.

He said Chinese mills had been pulling back on their purchases for the past two or three months because of a build up of stocks of garments, fabric, yarn and tops.

But now his threat to add a 10pc tariff on the remaining Chinese imported goods would, if implemented, drag clothing into the bitter bilateral battle.

This would add more negative sentiment into the minds of Chinese mill owners, he said. 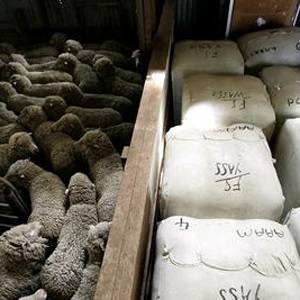 SELLING DILEMMA: Woolgrowers now face a dilemma in deciding when they should sell their clips.

"This just doesn't affect the wool market, of course. If we get into a full blow currency and trade war, the world economy will face some serious challenges."

Scott Carmody, Australian Wool Innovation's trade consultant, said the US-China trade dispute was heading a list of factors outside the wool industry that were impacting negatively on international demand and confidence.

Other issues included ongoing uncertainty over Brexit and the foot and mouth outbreak in South Africa.

But the US-China trade war was the big one. It had depressed China's domestic market, drying up a big chunk of sales for woollen mills.

Around 60pc of the Australian wool exported to China was consumed in the country with about 15pc ending up in US retail shops.

"They (mill operators) are as confused as we are, they don't know what to do," he said in a podcast for AWI.

When the Chinese mills "burped", Australia copped a "tidal wave" which was why the wool market had reacted so harshly, he said.

"We are going to continue to be affected until this (trade war) is worked out."