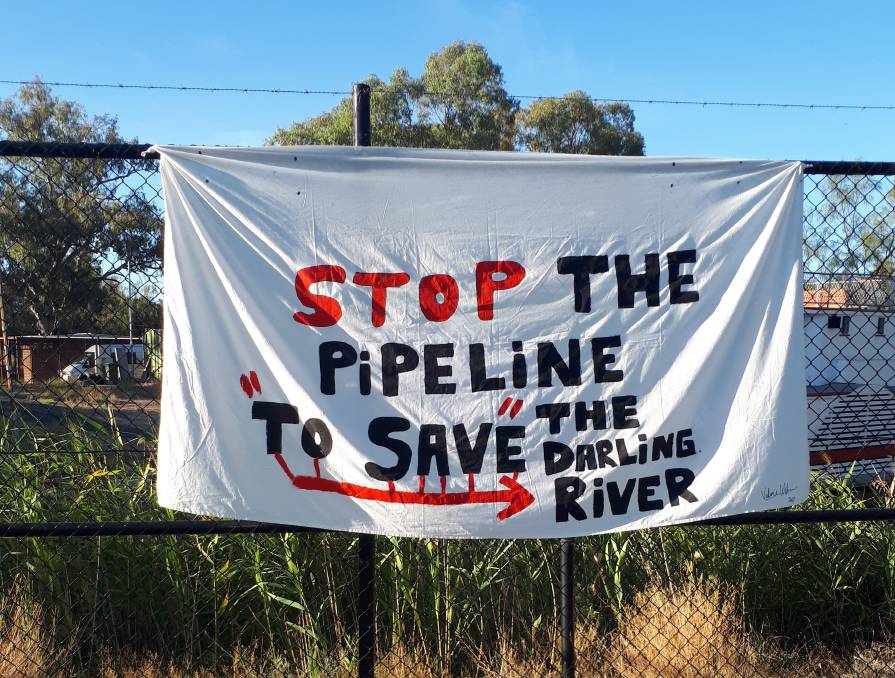 In operating since February, the Broken Hill pipeline runs for 270 kilometre from the Murray River in Wentworth. It was switched on February, and pumps up to 37 megalitres for town supply day.

It also found that: "Ultimately, the State's ability to manage environmental, agricultural and industry water requirements within the Basin is limited by Broken Hill's reliance on the Menindee Lakes system".

Menindee Lakes, a natural ephemeral lake system, was engineered in the 1960s into water storages to supply local towns, as well as agriculture and mining industries.

It is a key inland habitat for birds and the most critical breeding ground for golden perch.

The need to secure water supply for Broken Hill was a "manufactured crisis" and the water held in Menindee Lakes should not have been reduced to ease the economic impact on irrigation, Mr Field said.

"The business case shows what many in the Broken Hill community long suspected, that decoupling Broken Hill's water supply from the Menindee Lakes would open up more water for northern irrigators."

A spokeswoman for Ms Pavey said the business case selected the pipeline as the most effective solution for Broken Hill from 19 options.

"Of these options, the Business case found that the Broken Hill pipeline provided the best value for money and could be delivered within the necessary timeframe," she said.

"The most significant beneficiaries of the NSW Government's Wentworth to Broken Hill pipeline project are the people of Broken Hill."

While NSW government insists the pipeline is a standalone drinking supply project, there can be no doubt that reducing Broken Hill's reliance on inflows to Menindee frees the government's hand to re-engineer the lake system.

NSW government has an application in with the Murray Darling Basin Authority for the Menindee Lakes Water Saving Project, to reduce evaporation from the hot, shallow lakes by pushing water into deeper parts of the system, holding less water overall, and releasing it downstream more quickly into the lower Darling River.

The water savings would contribute to the water recovery goals of the Basin Plan, which allows states to swap buybacks of irrigation entitlement for the water efficiencies achieved through new infrastructure.

"Unbelievably, they didn't assess the environmental impacts of draining the Menindee Lakes, including on fish breeding and migratory birds. They failed to examine any options to buy back water entitlements from upstream irrigators," Mr Gambian said.

"Engineering a secure supply for Broken Hill has allowed the Menindee Lakes system to be drained."

Community feedback to NSW government on the project focused on concerns that Menindee Lakes would be run to deliver short, sharp bursts of high flows to reduce NSW's overall water consumption, which they argue will damage the environment.

Intense flow pulses could leave dry gaps in the river with water stranded in pools, where it becomes salty and deoxygenated. The high flows could erode banks and cut down trees.

It found government had over-allocated water entitlement to irrigators and called for major reform to reduce water take.

Then Water Minister David Littleproud also committed to spend $70 million, drawn from the $12 billion Basin Plan budget, on the report's 27 fish kill prevention measures, which will largely fall to states and agencies to implement.

The Vertessy report said the Menindee Lakes water saving project should be re-designed to "contribute less" to water savings under the Basin Plan and focus more on "improving water security and environmental outcomes in the lower Darling".

"The likely outcome of the current proposal will be a greater rate of drawdown of the lakes and a reduction in evaporative losses, but also reduced flexibility to manage water quality problems in the lower Darling in times of drought.

"It is recommended that governments design and implement a project for which water efficiency is only one of multiple considerations. Water management should also aim to enhance the lived experience of the local community with the river.

"Governments are encouraged to seize the opportunity to strive for a holistic mix of social, cultural, environmental and economic outcomes for the Menindee Lakes and lower Darling regions, even if this reduces overall system efficiency."

The Menindee Lakes water saving project is currently being assessed by the Murray Darling Basin Authority.

Sponsored by
"How badly do you reckon this has gone, champ?"
Test
Specialty food producers fear being cut off from online customers by Australia Post ban.
Test
Bulla Dairy Foods has thrown down the gauntlet in the battle for milk supply, announcing its 2021/22 opening price this week.
Test
The use of drones is roaring upwards according to latest data from DroneDeploy.
Test
Aust now needs to think about growing market share in China, not just regaining ground: Simon Quilty
Test
The last surviving dairy farmer in Clunes in northern New South Wales says the region is ripe for a dairy revival.
Test
Regulatory failure, poor management, behind Van Dairy woes.
Test
Purrumbete homestead is for sale via expressions of interest.
Test