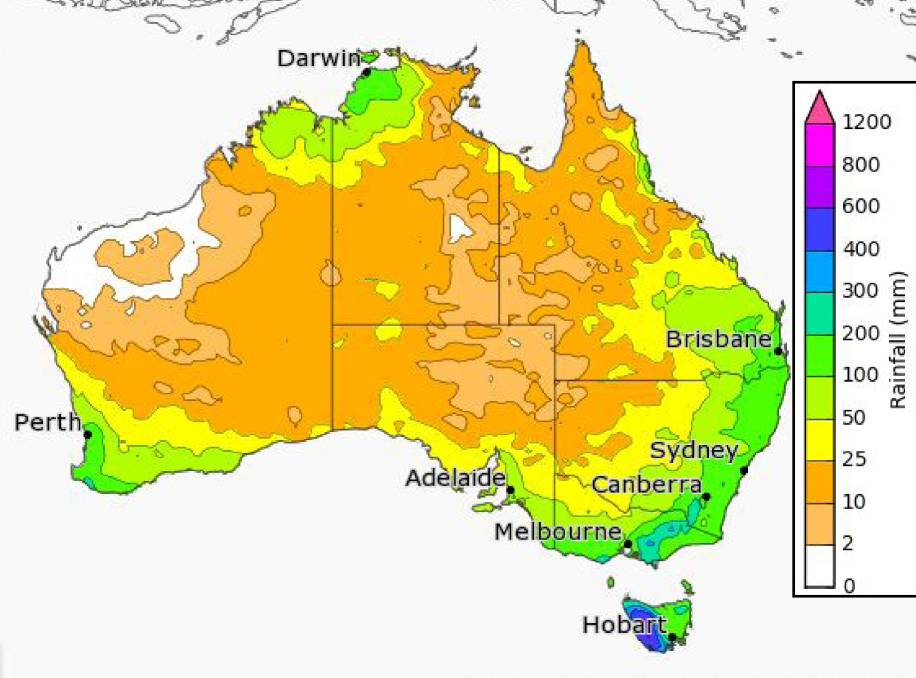 The August 15 map from the Bureau of Meteorology shows the totals that have a 75 per cent chance of eventuating. Figures to be updated later this week will be slightly worse.

The BOM seasonal outlook is out today and offers little hope for above average rain this spring.

The BoM spring outlook, released today, makes grim reading, with a strong Indian Ocean Dipole (IOD) event swinging the odds firmly in favour of below average rainfall for spring across virtually all of mainland Australia.

BoM climatologist Andrew Watkins said the IOD positive had gone above +1 for the first time since 2015, meaning the odds of above average rainfall for spring are now well below average.

"The event is stronger than normal with a lot of cold water around Indonesia, which means the odds of exceeding average rainfall are much lower."

It will mean drought stricken farmers in Queensland, northern and central NSW and far eastern Victoria are likely to have to wait until summer for meaningful relief from the dry.

Areas with winter dominant rainfall that are currently dry, such as far north-western Victoria and the SA Mallee, are also looking at a prolonged dry.

In terms of rainfall distribution, Dr Watkins said October was the most likely have below average rainfall, with the odds in September, while still favouring drier than average, slightly better for those looking for rain.

Over the nation, Dr Watkins said the 2019 winter was likely to end up being one of the top five driest and top 10 hottest on record.

The small consolation in the forecast, released by the BOM today (Thursday), is that unlike an El Nino weather event, which can impact climate until March or April the following year, an IOD event is virtually certain to break down in December.

Dr Watkins said this was due to the south-east Asian monsoon, which acts as a giant sea breeze.

This means that summer dominant rainfall will enter the period with neutral conditions and no climatic constraint on achieving average rainfall.

National grain and livestock analysts are keeping a close eye on the prospects for rainfall over areas with reasonable crop prospects, such as Western Australia, Victoria and the NSW Riverina.

With moisture running out in the Riverina and the odds swinging to a very high chance of below average rainfall for spring, crop forecasters are likely to start cutting Riverina production, which will in turn change the supply and demand dynamics.

Western Australia is forecast to be below average for spring rainfall, but the odds are not as severe as over the majority of the east coast, with Dr Watkins saying the IOD positive had the most pronounced effect on inland south-eastern Australia.

This could impact Victoria, where there is good yield potential, with farmers hoping to eke out enough rain to finish crops satisfactorily.