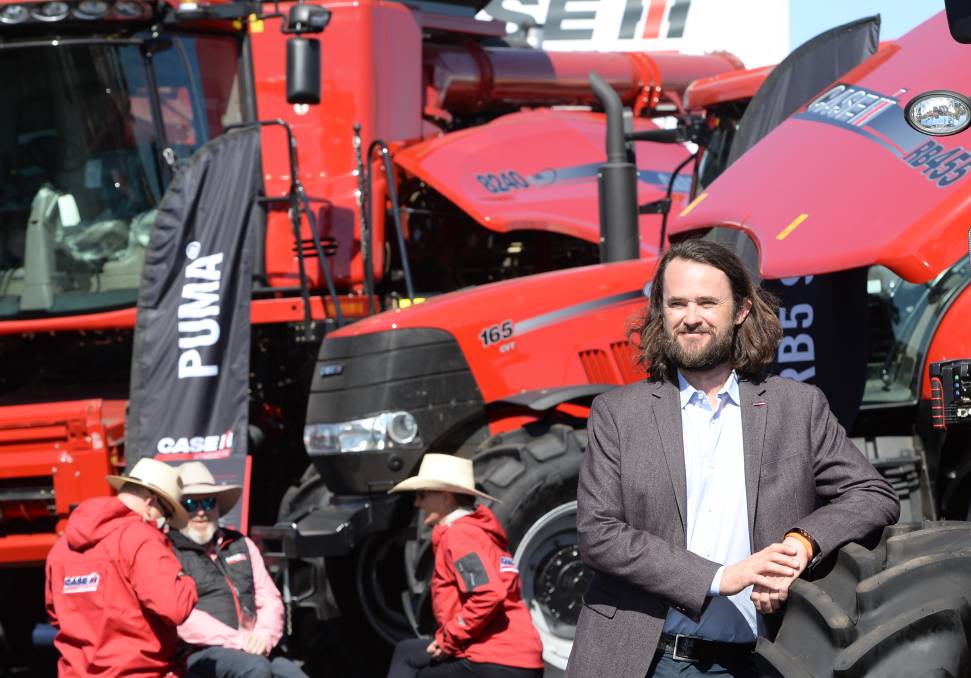 Case IH brand manager for Australia and New Zealand, Pete McCann, says the farm machinery game is all about seasonal challenges and focusing on nurturing the skilled staff it needs for the good years that follow.

Working in agriculture is all about having the right work ethic, and rolling with the seasonal punches, says Pete McCann

Farm machinery boss, Pete McCann, is telling his sales force not to worry about trying to sell anything in drought-stressed regions of eastern Australia at the moment.

"My sales guys have been told to just go out and talk to our customers," said the Case IH brand manager for Australia and New Zealand.

"See if they're okay. See if we can help adjust their finance repayments, but don't talk about selling."

This year is pretty average for a lot of people, but we'll get through this, because it will rain - Pet McCann, Case IH

Working in agriculture was all about having the right work ethic, and rolling with the seasonal punches and commodity market ups and downs, he told a NSW Farm Writers Agribuzz event.

"These days, from our point of view, we're just going out on farms and to big shows like AgQuip purely to chat to farmers and dealers, to say `we understand and we're with you in this' - because we are," he said.

"This year is pretty average for a lot of people, but we'll get through this, because it will rain.

"In fact, we know it can rain - it has been a very good season, so far, in some areas of Australia."

Mr McCann said while the farm machinery game may have some current challenges, the local industry expected tough times, and tough operating conditions for its equipment - and Case IH's US bosses understood this, too.

The sector could not afford to lose the valued staff who kept gear working and the industry operating in good years.

"When weather conditions bounce back, that Kenway and Clark dealership in Moree will need every one of those 24 mechanics out the back and sales people on the ground," he said.

"We've got to make sure our dealers get the support they need to retain as many people as they can."

Mr McCann, who took over the top job almost 18 months ago said it had been "a bit of an uphill battle" since he stepped into the role, but despite seasonal challenges in NSW and Queensland, he saw agriculture as a career with much more scope than many other options enticing school leavers.

"You don't have to sit in Sydney or Melbourne to work, even in senior roles," he said.

"We've got access to enough technology to enable our guys to stay in regional locations and enjoy the lifestyle if they don't want to move."

Get into ag early

In fact, much more should be done to get school students interested in agribusiness careers and apprenticeships while still in school.

"You've got to start getting them interested early, and into apprenticeships while they're at school," said Mr McCann, flagging his enthusiasm high school traineeships.

We hire on work ethic, empathy with our customers and understanding that in ag the nine to five routine doesn't pay - Pete McCann

He had left school in Central West NSW "as fast as I could, to drive tractors and work on cotton pickers".

"We're changing the way we think about our work and the way we recruit, too," he said.

"We hire on work ethic, empathy with our customers and understanding that in ag the nine to five routine doesn't pay.

"So long as you have the right work ethic I can teach you just about anything you need to know to do the job."

With 103 dealers and network staff spread Australia-wide, Case IH was looking at options to establish a national training and field demonstration centre adjacent to a regional city airport.

It made sense to bring staff and customers "from South Australia or anywhere" to one regional location for special training and demonstration days, rather than run a new Quadtrac or harvester across regional Australia to meet release date schedules and local seasonal demands.

The company already had a strong relationship with TAFE at Wagga Wagga in southern NSW, where its mechanics spent training time at the TAFE Primary Industries Centre, which boasts 250 hectares of farmland and equipment to develop careers agriculture and horticulture.

Wagga was fast becoming known as an agricultural training hotspot and he wanted to see similar training arrangements rolled out with TAFE in other states.

Apart from having "some of the toughest places on earth to make machinery work for you", Australia was also recognised by the big northern hemisphere farm machinery companies as a diverse and very different marketplace to their mainstream US or European farming environments.

"Just because North America builds something, we don't just take it as it comes from the factory," said Mr McCann, who grew up on a farm near Dubbo, in Central West NSW.

"Before we accept anything from the US we do a local validation, because we've learnt the hard way some gear just doesn't work so well in our extreme temperature and farming conditions," he said.

"Kununurra, for example, has some of the hardest soils and temperatures on the planet."

Attitudes to farming varied quite a bit, too.

When Mr McCann worked in the US he was startled to find farmers in Florida, Georgia and Alabama buying top of the range machinery "with all the bells and whistles", yet many only worked their machinery from 9am to 5pm.

"They'd buy a tractor and spray rig with all this extra technology, and never seemed to use it - they'd never even spray at night."