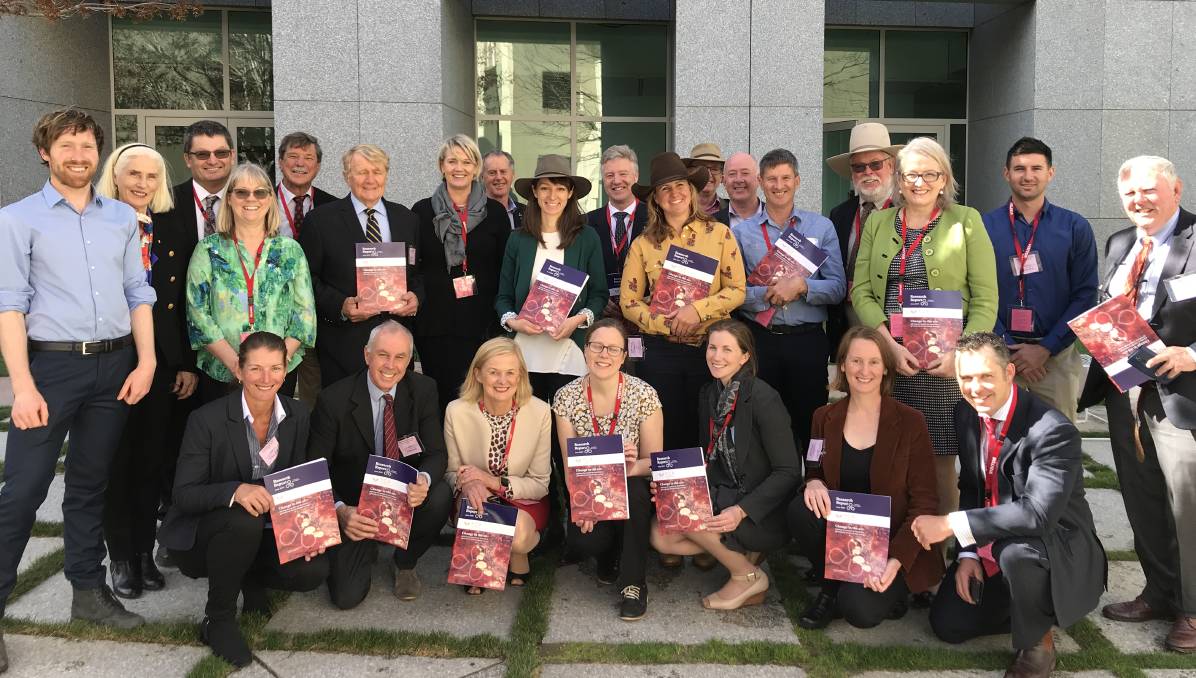 A delegation of Farmers for Climate Action members in Canberra this week.

Farmers for Climate Action sound alarm over lack of national strategy to adapt agriculture to effects of global warming.

The industrial sector most impacted by climate change, agriculture, is a rudderless ship sailing into a global warming storm.

That was the message from producers and researchers who came to Canberra today, and they implored political leaders to urgent action on the problems identified in the Change in the Air report, which was prepared by the Australian Farm Institute.

Political roadblocks have hamstrung farmers, and industry must change its practices to production systems that are profitable and sustainable in a changing climate.

Their policy would include measures like a government funded market for environmental stewardship - which pays farmers who deliver environmental benefits from their land, measures to encourage soil carbon capture, sustainable herd management, and so on.

Change in the Air was launched by rural MP and Environment Minister Sussan Ley, who said the science on climate change is clear, as well as the need for new policies to adapt to changing circumstance.

It's an open question as to whether the government hears their call.

Ms Ley's Coalition colleagues in the Nationals are divided on the science of climate change and the role of carbon emissions in global warming, and the need for government to help drive change in agriculture and energy policies.

No elected officials from the Nationals attended the report launch. However, Ms Ley said the government was "very much focused" on tackling the impacts of climate change.

"There's no question that the climate is changing and the science behind that is conclusive. As we go through this drought we do need to look at it in a different context and develop long term strategies to adapt."

The government's big ticket agriculture policy for agriculture is the Future Drought Fund, which will deliver $100 million a year in perpetuity. It was created by re-badging the $3.9 billion held in the Building Australia Fund, which was established under the former Labor government.

Government has yet to propose projects, and the fund won't pay out until mid-way through 2020.

"If the expenditure out of the Future Drought Fund classifies drought as distinct from the changing climate it will deliver the wrong outcomes," Mr Heath said.

"If the Drought Fund is linked to a broader climate strategy which describes how drought fits into a changing climate then it's more likely to deliver long term outcomes that are appropriate."

"This problem is complex and its nuanced and to limit the solution to the Future Drought Fund really does everyone a disservice," she said.

"It's increasingly clear that the current patchwork of policies is just not working," she said.

Channel country grazier Angus Emmott, who runs a beef herd in outback Queensland, said Australia needed to act to reduce its emissions, and research to help producers adapt to a changing climate.

A small reduction in average annual rainfall would put his Noonbah Station, near Longreach, out of business, Mr Emmott said.

"I see a huge need for a national strategy. Things are changing big time in this part of the world. And it's different at a local level across Australia, and we need plans that reflect that."

"There are big opportunities... We can create real confidence in our industries with adaptation and mitigation strategies - like the red meat industry plan to become carbon neutral by 2030. But we need some help in the policy sphere to make it happen.

"We do get a lot of royalties from digging up resources and shipping them off, and that won't change. But we don't need to be opening new thermal coal mines."

Wheat and wool producer Christie Kingston, Goomalling, Western Australia said she came to Canberra to call for policies that would her farm a viable career for her daughter.

"I have a 12 year old daughter and she wants to stay on our property when she grows up. I want her to feel like there's a future there for her," Ms Kingston said.

"There is a future there for her, but we just need to figure out what it is. We need to know what to invest in today, what enterprises will work when she's old enough to run the place and we need information that is what this is all about."