When the Pentagon and New York's twin towers were smashed by al-Qaeda terrorist attacks, Ian Donges, was at the centre of the drama, caught in Washington trying to end US import tariffs on Aussie lamb.

Looking back at the events, people and issues which shaped the National Farmers' Federation's past 40 years 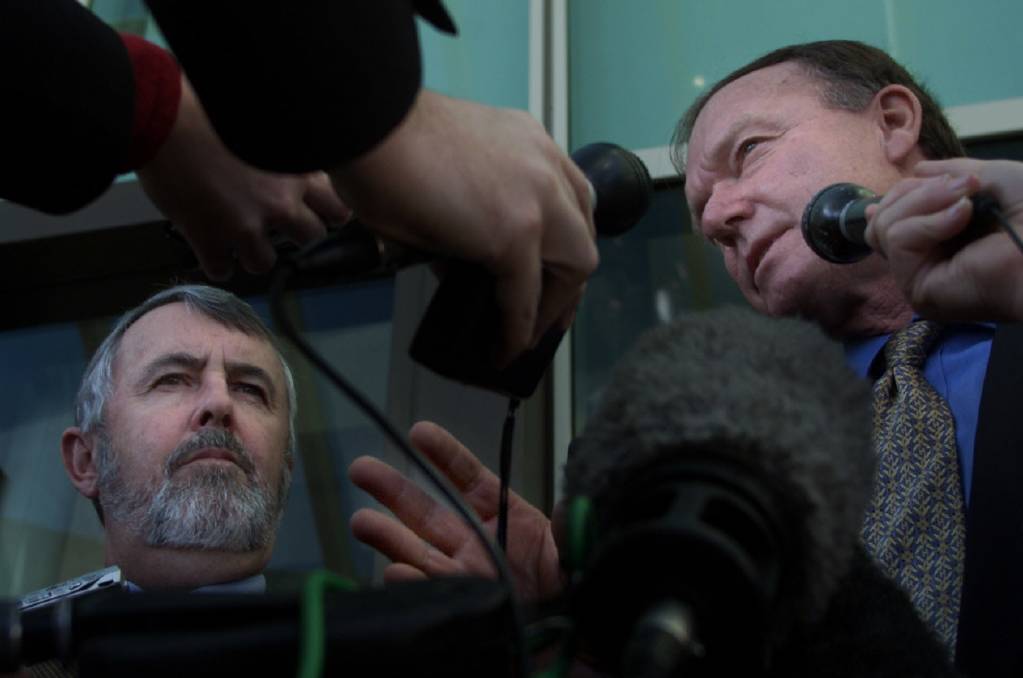 Roasting: Sheep Meat Council of Australia president, Bill Whitehead from Mortlake, Victoria, and National Farmers Federation, president, Ian Donges, vent their frustration during a press conference at Parliament House about US tariffs on Australian and New Zealand lamb imports in the early 2000s.

Of the many big news events and farm policy issues playing out during Ian Donges National Farmers' Federation presidency, the topic which gained most on-going notoriety was lamb.

When Osama bin Laden's hijacked aircraft hit New York and Washington's Pentagon on September 11, 2001, Mr Donges was actually in the US capital diplomatically debating the contentious issue of tariffs on US lamb imports.

The meeting was abandoned as NFF delegates were hastily ushered to the Australian embassy's three-storey basement bunker with a host of other Aussie business and government officials in town at the time, including Prime Minister, John Howard.

Lamb had hit the headlines back in mid-1999 after US President, Bill Clinton, slapped a nine per cent tariff on all Australian and New Zealand lamb imports, plus a steep 40pc tariff on imports exceeding 1998 volumes.

The move outraged Australian farmers and our metropolitan media, too, given Australia had built up a 17,000 tonne annual export niche to America, where local production was tumbling, and President Clinton had made free trade and open markets a key plank in US foreign policy.

"We always thought the American way was to award initiative and effort," he said.

"Our industry had shown initiative to develop the lamb market in the US." Lamb losers: Even the US lamb industry had doubts about the value of Washington's tariffs on Australian lamb imports, as reported by The Land the week after the lamb ban was imposed.

Mr Donges didn't mince words at the time either, saying; "US farmers preach free trade all the time, yet their actions send a very different message".

"This is a classic case of where an industry that has been dying for 40 years, despite subsidies and other US government assistance, goes to the president and gets more subsidies and more trade barriers."

Mr Donges, himself a lamb and grain producer from Central West NSW who led NFF from 1998 to 2002, said the US lamb ban stirred extraordinary emotion and support for sheep producers for another two years.

In hindsight, 20 years later, he said it was also the making of today's powerfully successful export and domestic lamb market.

"Lamb had been the poor cousin in the meat industry, but the public got behind us, and that snowballed with the popularity of those smart MLA marketing campaigns starring Stan Kekovich," he said. Lamb slam: Coverage of Australia's big international the issue of the time - the expensive US lamb snub - in The Land.

"Nowadays our lamb is considered a top shelf product in big demand locally, and overseas, including America, and we're producing a much bigger, better animal to meet consumer preferences."

Canberra was also quick to show support to the lamb industry after the US rebuff.

The government worked fast with NFF to prioritise funds for marketing, trade missions and to boost lamb production and meat quality research.

The ill-fated trip to Washington two years later was part of an ongoing campaign to reopen lamb's US market access and shore up other farm trade opportunities, including breaking into the US sugar market.

However, as sirens and smoke spread across Washington and security personnel rushed to enforce a lockdown, American Sheep Industry Association representatives were initially reluctant to halt talks with Mr Donges and other Australian delegates.

"They insisted they'd driven more than four hours for this meeting and wanted to keep talking to the Aussie guys," he recalled.

It took another five days after the al-Qaeda terrorist attacks for the panic to subside and enough flights to resume so Mr Donges and NFF policy advisor, Lyall Howard, could book a seat on a plane back home.