A new meat replacement developed by CSIRO is likely to create opportunities for Australian pulse producers. 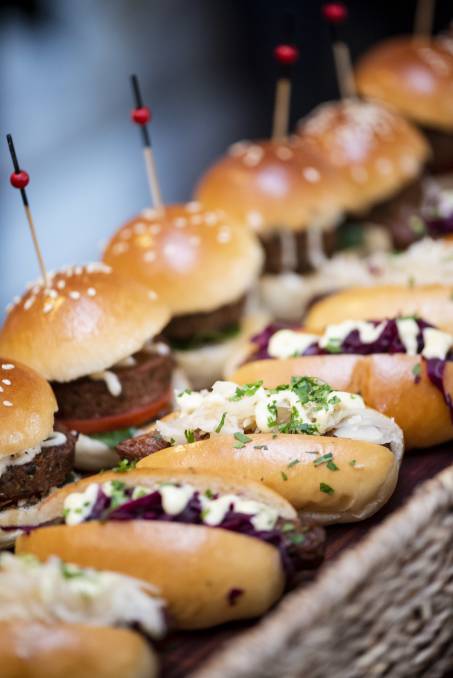 NEW OPTION: The meat substitute developed by v2foods was featured on the menu at the company launch earlier in the week in a range of styles, including these mini hot-dogs.

A NEW plant-based protein business, set up between CSIRO and commercial partners, is set to source supply for its product from Australian pulse and grain producers.

V2food officially launched this week, with the unveiling of its first range of products, including a mince replacement and a hamburger patty, with further products in the pipeline.

The alternative meat sector is booming in the developed world, with consumers looking for alternatives to red meat for perceived health benefits and ethical reasons

V2food has been set up by CSIRO, Main Sequence Venture and Competitive Foods Australia.

"Initially the focus is on taste, texture and the sensory aspect of eating.

"We want a product that people are eating and enjoying and coming back for more," Dr Colgrave said.

"Down the track the health profile is also very important, but we want to create a product that all people can enjoy."

While cagey on the exact composition of the product she said it would contain commonly grown Australian legumes, cereals and oilseeds.

She said during the research and development phase some imported material had been used but the goal was to use 100 per cent Australian products.

"We hope it will develop as a steady and stable market for Australian farmers," she said.

She said further processing capability would be required to help scale up the v2foods concept.

In Canada the demand from alternative protein producers has been part of the reason for a nation-wide shortage of yellow peas, one of the most widely grown pulse crops in the North American nation.

She said it had been a rapid rise from the company's start up just eight months ago to this week's launch and that further products would be developed.

"There is a lot more in the pipeline, but products like patties or sausages are what are popular in the sector and we'll be looking at them."

Plant-based proteins or meat replacements are not a new idea, with several high profile products already available in Australia.

Dr Colgrave said v2foods' point of difference would be the taste and similarity to meat.

"It is very tricky to accurately replicate meat and all its complexities, its essentially a giant Master Chef challenge, we deconstruct the plant sources then reconstruct them together but we believe we are getting there."

She said it was difficult getting the full nutritional profile, including the amino acids into the product was also difficult but by using complementary plant sources they had achieved a good result, with scope for further improvements.

Dr Colgrave said the market was looking for a meat replacement rather than simply a legume-based food, such as a veggie burger.

"We want this product not just to be for vegetarians and vegans but something people can share, rather than having to cook two separate BBQs when people come around you could simply have the patties and everyone will be happy."

She said having an easy to prepare product was critical.

People now are time poor and they want to have the convenience of the product."

In terms of sustainability, she said the product would not have high processing energy costs.

"We want to do something that is really sustainable/"

Dr Colgrave said she believed plant based proteins were more accepted by the market than cellular food.

"The image with cellular food is still something grown in a petri dish, whereas with plant based proteins we don't see any plateau or ceiling any time soon."

"11pc of Australians are vegetarian and a further 14pc are watching the amount of meat they eat and those figures are growing." Inaugural chief executive of v2foods Nick Hazell was excited for the future of the business.

"We've drawn upon the best food, nutrition and sustainability science from CSIRO to develop a sustainable and nutritious product, with an unmatched texture and flavour," Mr Hazell said.

"The goal is for our product to be a delicious alternative to meat, accessible to every Australian."

Mr Hazell said it had been a busy period getting the company ready for launch.

It was first founded just eight months ago and Mr Hazell said the ability to develop a product so quickly was the result of the team's access to CSIRO's expansive network of expertise.

CSIRO provided research and development resources to v2food on a research for equity arrangement.

While Mr Hazell was running the business on his own initially, he had access to hundreds of scientific minds to help perfect the product.