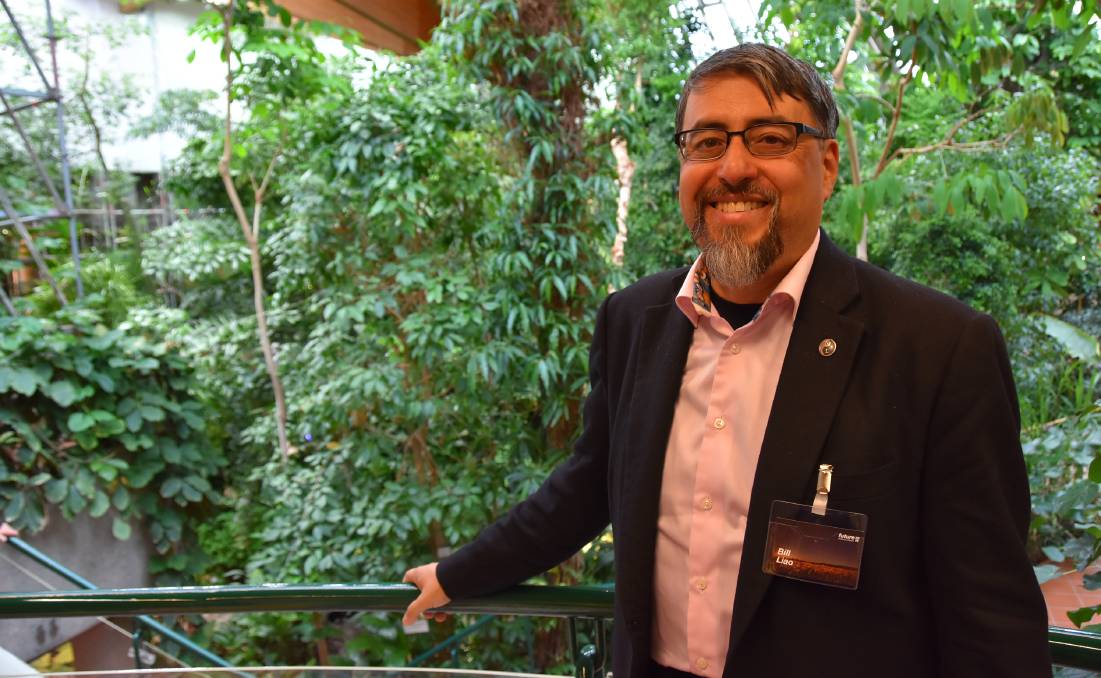 IN 2011, Bill Liao swore he would not fly on a plane until he'd planted 100 million trees.

The counter currently stands at 22,271,212 trees planted and he is more committed to the goal than ever.

The Australian-born Mr Liao is the co-founder and chairman of WeForest.org, a project aiming to transform 250,000 hectares of forest landscape by 2021.

It was on this basis that Mr Liao was one of the guests at the Bayer Future of Farming dialogue held in Germany last week.

He conducted a "fireside chat" with Bayer Crop Science head of research and development, Bob Reiter.

Apart from an update on the reforestation work, Mr Liao gave insights into some of the agriculture start-up projects he has seen.

Innovations included a small monitoring chip that is put within grain loads to deliver real-time conditions of the grain, while another was an automated plant growing robot for homes with the possibility of producing vegetables.

He also spoke about a microbial project which was aiming to train bees to have pollination preferences for certain crops.

We are still going to be dependent on farmers doing a great job on their farms. - Bill Liao

Mr Liao detailed his strong belief in permaculture which uses natural growing systems to benefit each other.

WeForest helps establish permaculture around villages in rainforest communities throughout the world.

"It's such a different style of farming, it's almost from another planet," Mr Liao said.

He said addressing hunger was still one of the grand challenges facing humanity.

"I'm very comfortable in tackling that challenge. We've lifted a million women out of poverty," he said.

Permaculture, in his view, had the potential to feed large populations very quickly.

While he said the hesitation to take-up permaculture within the conventional farming community was a stylistic issue, the skill of agricultural producers was critical.

"We are still going to be dependent on farmers doing a great job on their farms," Mr Liao said.

Future food production will heavily rely on vertical farming and cellular agriculture, according to Mr Liao, particularly with an increasing need for protein.

He referenced companies such as Perfect Day which makes dairy products without cows, using microflora (a natural organism that can produce large amounts of pure protein) and fermentation to convert plant sugar into milk proteins - whey and casein.

Perfect Day says the end product is nutritionally identical to those that come from cows.

Mr Liao said other start-ups would also be pursuing methods of creating protein by the tonne but with less energy, water and greenhouse gas emissions.

Creating more with less was one of the keys to the bigger picture of helping humanity and the planet, according to Mr Liao.

WeForest only re-establishes plantations on land that has been stripped of trees.

It is also mindful of the tree species planted.

Mr Liao had no plans to slacken off on his pledge to drastically reduce his own carbon footprint.

He said he hoped in five years time that climate change wouldn't be the topic of conversation it currently was.

Regarding his means of transportation, Mr Liao was utilising trains and sea travel to move about the globe, including a particularly lengthy journey on the Trans-Siberian Railway.

The story Permaculture could feed the hungry, save forests first appeared on Good Fruit & Vegetables.