As the National Farmers' Federation celebrates 40 years of leadership this week, we've been looking back at the highs and lows of each decade of advocacy. Here's a look at the early 2000s. 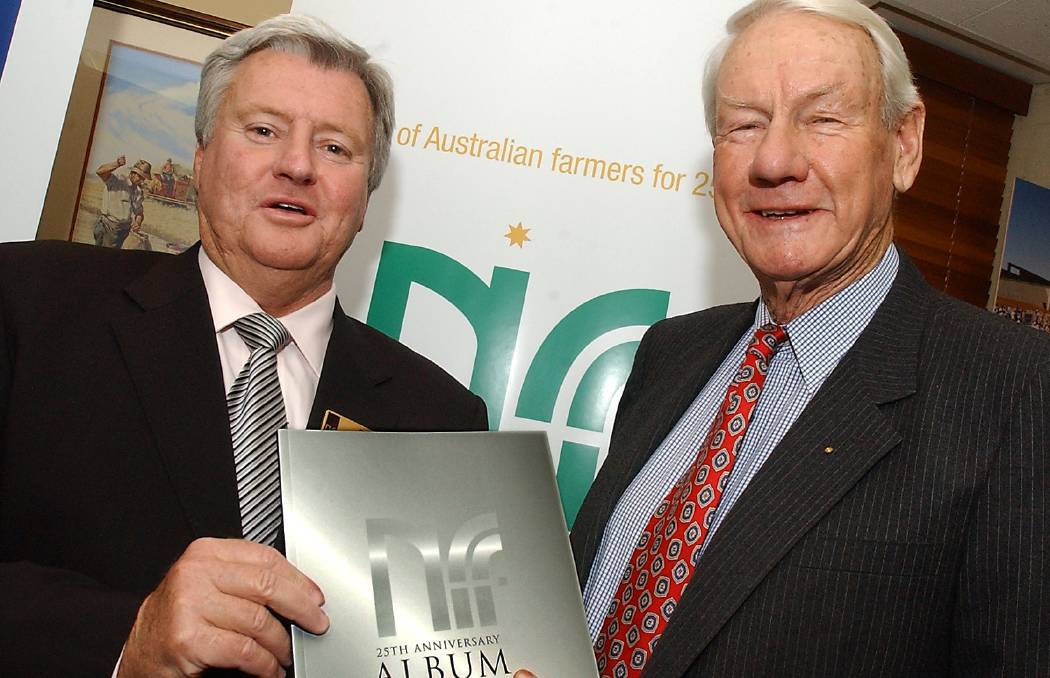 National Farmers Federation president from 2002 to 2006, and NSW-Queensland border livestock and grain producer, Peter Corish, marks the NFF's 25th anniverary year in 2004 with Michael Davidson, the organisation's second president from 1981 to1984.

Despite the onset of the nasty Millennium drought, and the political heat getting hotter in the bush with the rise of Pauline Hanson's One Nation movement, the early 2000s emerged as a politically fortuitous time for farming's peak lobby body.

The National Farmers Federation had a supportive ally in the Coalition federal government as Canberra realised it had to listen up and shore up its support base in frustrated regional Australia.

He also took on board president Ian Donges "half joking" suggestion that federal Cabinet should go bush to get a better feel for rural issues, subsequently flying his cabinet to Longreach in Western Queensland.

The Howard-Fischer Coalition was on the back foot in many regional areas, particularly Queensland, battling the rapid rise of Hanson's populist conservative taunts and worried by her new party's sudden 11 seat-win in Queensland's 89-seat parliament. National Farmers Federation president, Ian Donges, from Cowra in NSW, enjoying lamb for dinner with a useful friend of the organisation, Prime Minister, John Howard in 2002.

Mr Howard's outback cabinet meeting coincided with a 20th anniversary gathering of the NFF in late 1999.

He used the occasion to credit the national farm body as "an outstandingly clear and loud voice for the interests of farmers", at the forefront of "arguing for necessary change and reform", including being one of the first national bodies to campaign for a floating exchange rate, and industrial relations reform.

The Coalition's response to the feedback received from the bush was to improve drought preparedness planning on farms, introducing farm management deposits in late 1999, then granting special taxation depreciation status for drought fodder storage assets such as hay sheds.

In 2001 Canberra also bowed to NFF pressure, freezing the diesel fuel excise rate, which until then was adjusted as the consumer price index rose, lifting fuel taxes about three per cent twice each year. 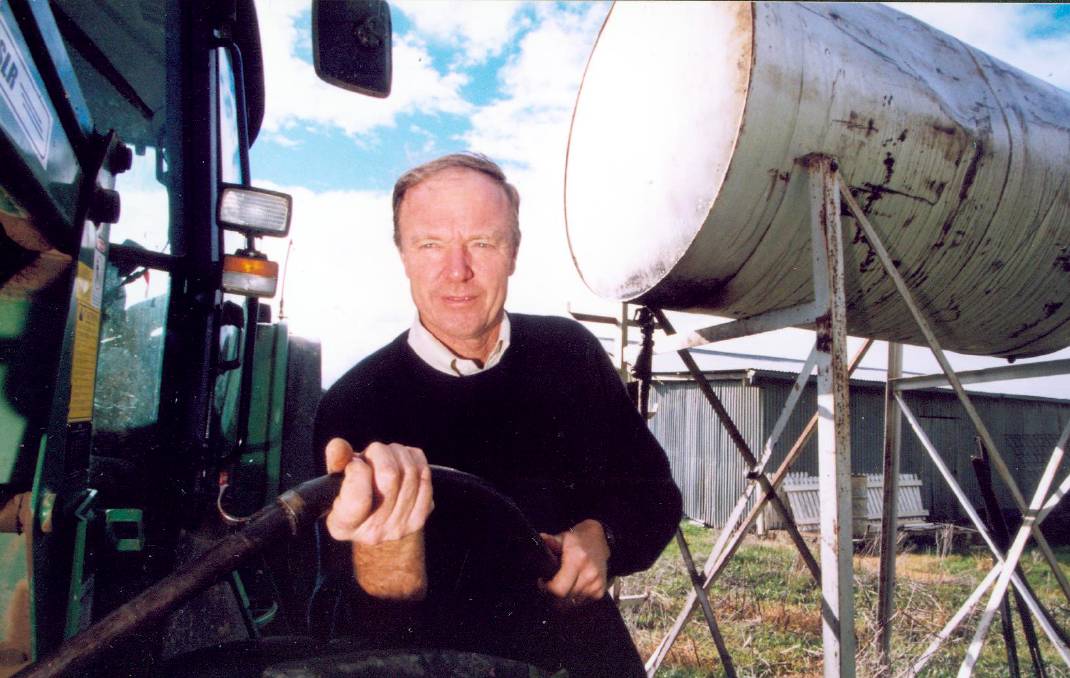 Fueled up: Six-monthly fuel excise increases were a target issue for the National Farmers Federation in the early 2000s. Eventually the federal government buckled to pressure from NFF president, Ian Donges, and the wider farm sector, freezing the government tax take for the next two decades.

"They were pretty big calls by Howard Government given it had to convince Treasury to forego tax revenue," recalled then president, Ian Donges.

"We'd pushed the FMD concept for some time so farmers could put money aside and avoid big tax bills after selling livestock in drought years - they'd have funds in reserve when they had to restock in better seasons."

The Australian Conservation Foundation and NFF also tapped federal funds to renew their Decade of Landcare priorities for the Commonwealth on land degradation, and initiate the National Action Plan for Salinity and Water Quality launched in 2001.

An early cost cutting response was NFF's withdrawal from the International Federation of Agricultural Producers, then a broader membership model was proposed. 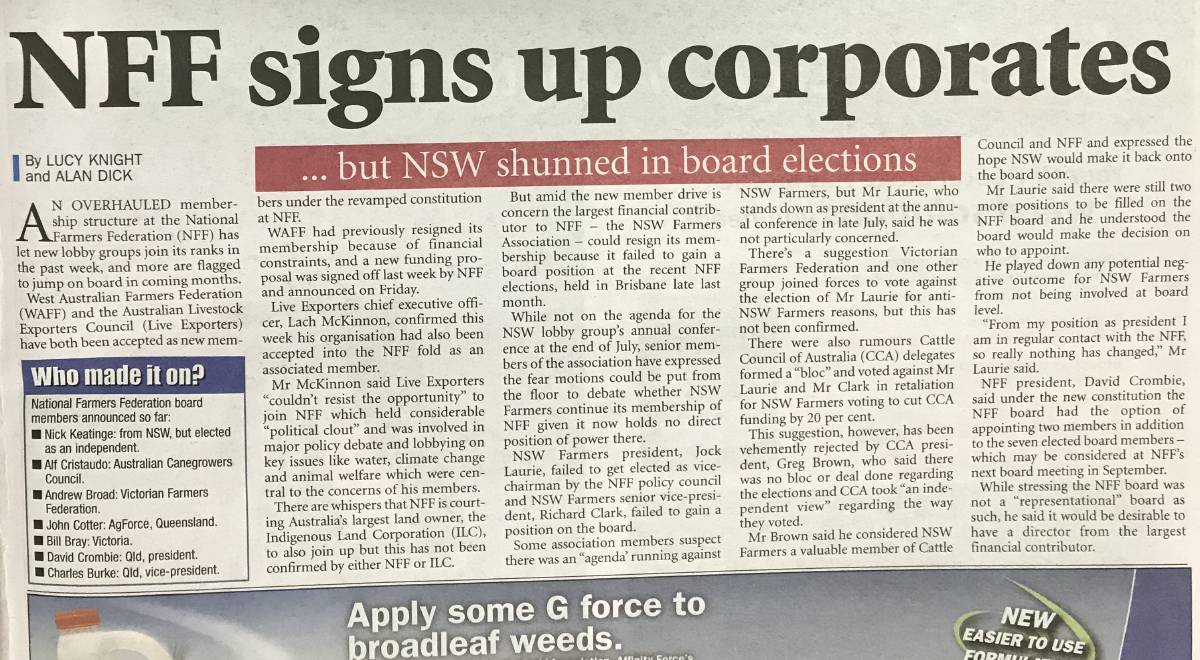 Big deal: Early media of the news National Farmers Federation was opening its membership to corporate farmers, agribusinesses in 2009.

By 2009 NFF had opened its doors to corporate farming business, which previously had limited opportunities to contribute directly to national policy agendas unless they had delegates at branch level in state organisations.

Industry bodies such as the veterinary and livestock agency sector were invited to join and contribute their knowledge, too.

One of NFF's big natural resource management wins came in 2003, when its lobbying efforts with the national and state governments secured the National Water Initiative. 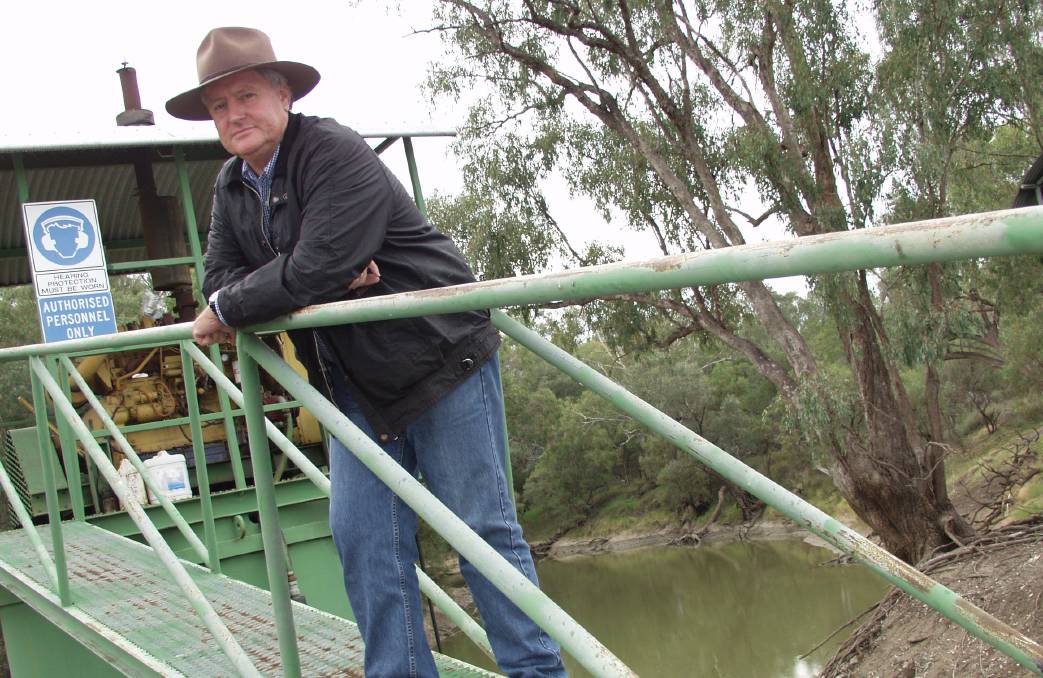 Pumped: National Farmers Federation president and irrigator, Peter Corish, successfully led the fight for the National Water Initiative to be agreed to by all state governments, setting the foundations for a national water management strategy.

"It recognised water was an asset which had a market value and couldn't just be taken away from irrigators or rural communities without being paid for at a market price," said Peter Corish, NFF's president from 2002 to 2006.

"The NWI also focused irrigators and environmental managers on making efficient use of the asset, also driving development of the Murray Darling Basin water sharing plan, and those basic principles are still valid.

Mr Corish, a NSW-Queensland border grain, sheep and beef producer who had previously led Cotton Australia, was also close to final negotiation action when the US-Australia Free Trade Agreement was signed in 2004 - and close to the flak from disappointed farm groups. 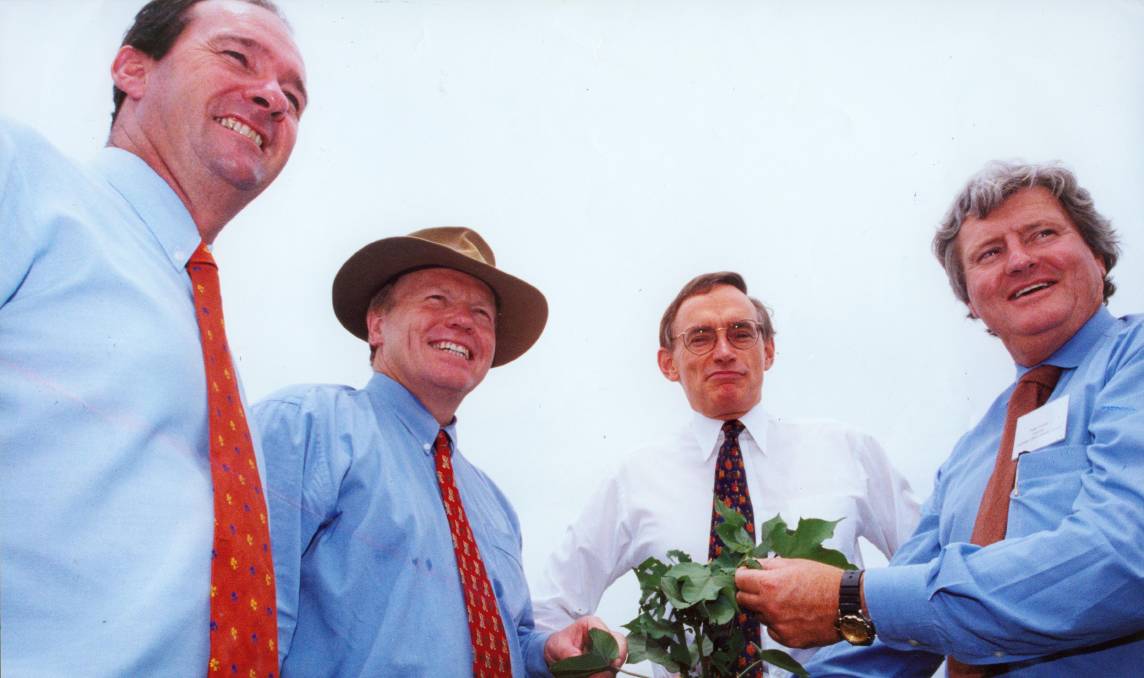 The FTA was the precursor for a succession of liberalised trade deals a decade later with Japan, China and South Korea and the Trans-Pacific Partnership.

Mr Corish was in Washington when the US deal deadline arrived and "very disappointed there weren't more tangible benefits for ag".

"Sugar was completely excluded because of the powerful US lobby, and other gains weren't so clear, but we achieved immediate benefits for our dairy, horticulture and beef sectors," he said.

"We realised we wouldn't get a better result, but the guidelines were cast for further free trade gains to follow." 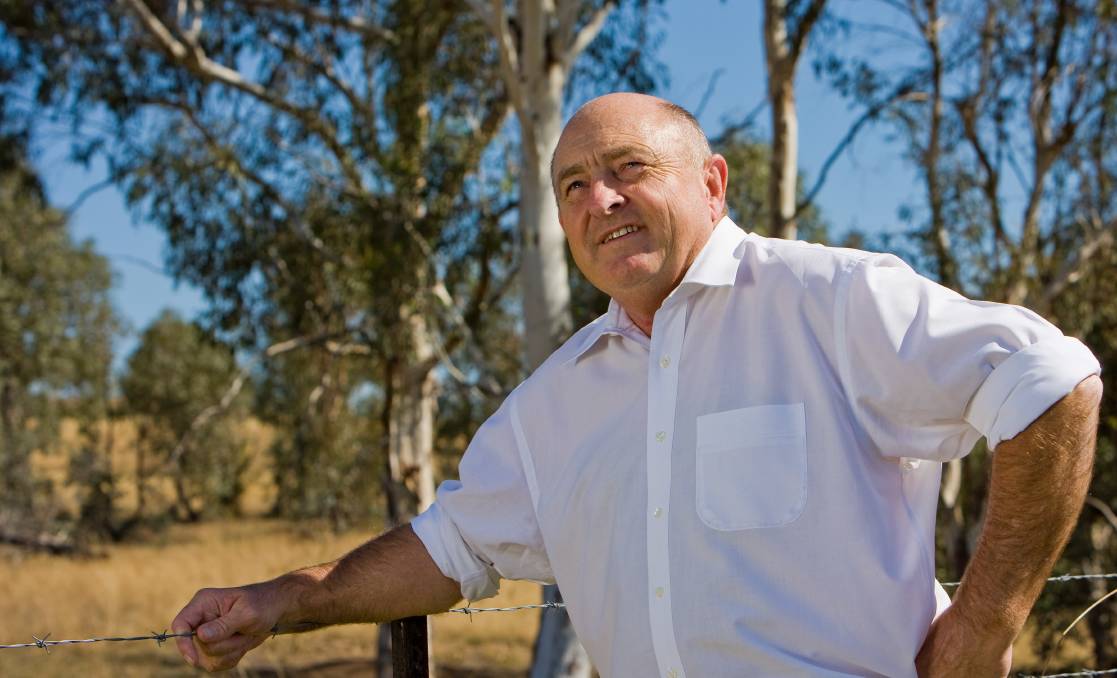 Although farmers were frustrated by the wearying Coalition Government's inaction on farm policy demands and the agenda instability which accompanied the Rudd-Gillard-Rudd Labor years, Julia Gillard won kudos for her role as Industrial Relations Minister prior to emerging as Prime Minister.

"She understood the ag workforce needed flexibility and uniformity and the principles we pushed to reform working restrictions so employees could put in longer hours at certain times when peak harvest or other seasonal work situations demanded," said Mr Crombie.

"She got that story and was good to work with."

The NFF also worked to cash in on the Rudd Government's digital connectivity campaign and the rise of the NBN, campaigning for much improved communication options and funding, particularly to resolve the patchy mobile phone signals plaguing bush businesses and communities.

As dry seasons grew progressively droughtier, NFF also pushed hard for changes to government policy to further promote risk management and in cases where long term profitability was questionable, give farmers greater flexibility to exit the industry before being overtaken by costs and debt.

The peak body was closely involved in a Western Australian case study trial used to benchmark profitability and risk management options for producers in drought.

In 2010 the ongoing partnership with the conservation foundation led to a national land management program, Repairing the Country and the National Action Plan for Salinity and Water Quality.