As the NFF celebrates 40 years, we look at the big moments for the national farm lobby group through the 1990s. The National Farmers Federation faced some of its greatest challenges and scored one of its biggest wins during the 1990s.

The major victory came late in the decade when NFF president, Donald McGauchie, spearheaded the breaking of the costly stranglehold the Maritime Union of Australia (MUA) had on the operation of the Australian waterfront.

McGauchie, from the same mould as his union-busting predecessor in the 1980s, Ian McLachlan, became a key figure in what the media dubbed "War on the Wharves" in 1998.

The main players were Chris Corrigan's Patrick Stevedoring and the MUA but a company formed by the NFF and headed by McGauchie, Producers and Consumers Stevedores (P&C), provided Patrick with strike-breaking labour at the height of the battle. 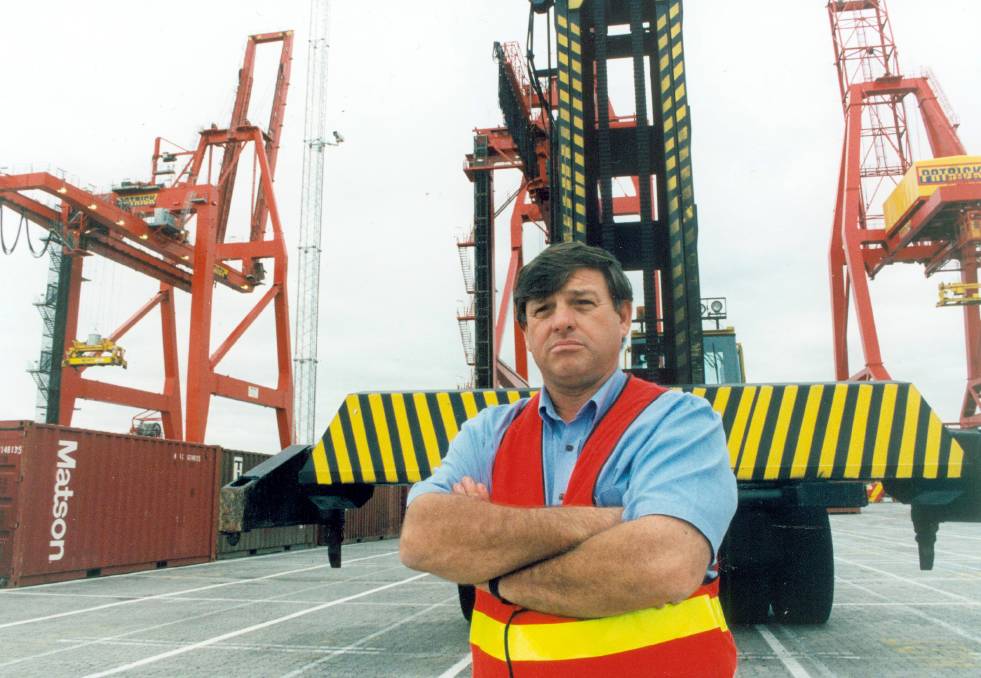 WARRIOR ON THE WHARVES: NFF president, Don McGauchie, was a central figure in a successful campaign to dilute union power on Australia's waterfront.

Poor work practices and over-manning on the waterfront were reducing farm export returns and adding to the costs of importing farm machinery and other inputs.

NFF claimed the wharfies were working only 29 hours a week but were earning $90,000 a year.

Patrick met stiff MUA resistance when it tried to cut its workforce and reduce labour costs in a new industrial agreement in 1997.

The Howard Government had been elected in 1996 and the new Prime Minister quickly announced his intention to increase productivity on the docks to world standard.

The waterfront war was sparked in late January, 1998, when Patrick locked its employees out of its dock operation in Melbourne and P&C Stevedoring began training a new workforce.

Strikes and bans on overtime continued at Patrick operations around the country until the company sacked all its workers on April 7.

What followed was a pitched battle on the waterfront and a legal battle in the courts but when the dust settled the MUA, although it claimed victory, had lost control of recruitment, rosters and manning levels on the wharves along with around 55pc of its members.

Paul Houlihan said the dispute changed the balance of power on the wharves and led to a major lift in productivity.

McGauchie served as NFF president from 1994-98 and went on to become on of Australia's leading business figures serving on the board of the Reserve Bank and chairman of Telstra, Nufarm and AACo.

Earlier in the decade the Mabo and Wik High Court decisions on native title sent pastoralists into turmoil and presented the NFF with one of its starkest challenges.

The Native Title debate raised serious doubts over land tenure and plunged farmers into unprecedented uncertainty over their property rights.

In June 1992 the High Court ruled that Indigenous Australians had rights to land (native title) which weren't extinguished by Europeans colonisation (the Mabo case) and followed that up with another ruling in 1996 that pastoral leases and native title could co-exist (the Wik case).

Prime Minister Paul Keating moved to enshrine the Mabo decision in legislation through the Native Title Act which caused an eruption of fear mongering from the Opposition and the mining lobby which created deep fear in the rural sector.

NFF president, Graham Blight, and his executive director, Rick Farley, had the job of responding on behalf of farmers.

Nobody could explain Mabo's implications for pastoral leaseholders who had poured their lives and incomes into their properties.

The NFF strongly defended the rights of Australian farmers and campaigned for land tenure certainty while maintaining its preference in settling native title issues through agreement rather than litigation. FRIEND OF BUSH: Rick Farley was an astute rural lobbyist but he also had a deep passion for improving the management of Australia's natural environment.

Farley ensured the NFF remained a major player in the Mabo debate rather than damning the whole process like the Coalition and the mining industry.

His support of proposed native title legislation in September, 1993, incensed the Coalition with its spokesperson on resources and energy, Peter McGauran, calling for his resignation and claiming the NFF had turned its back on its rural constituents.

Around 11.30pm on one of the last days before the Bill was tabled Paul Keating rang Graham Blight and nailed down the NFF's crucial support by giving his personal assurance their land titles were secure.

"I trusted Keating to deliver," Blight said in a later interview.

Farley, who died in 2006, was executive director of the NFF from 1988-95 and later became an activist for Indigenous rights.

One of NFF's key priorities from its inception had been achieving liberalisation of the world agricultural trading system and led the way in embracing and advancing a free market philosophy. 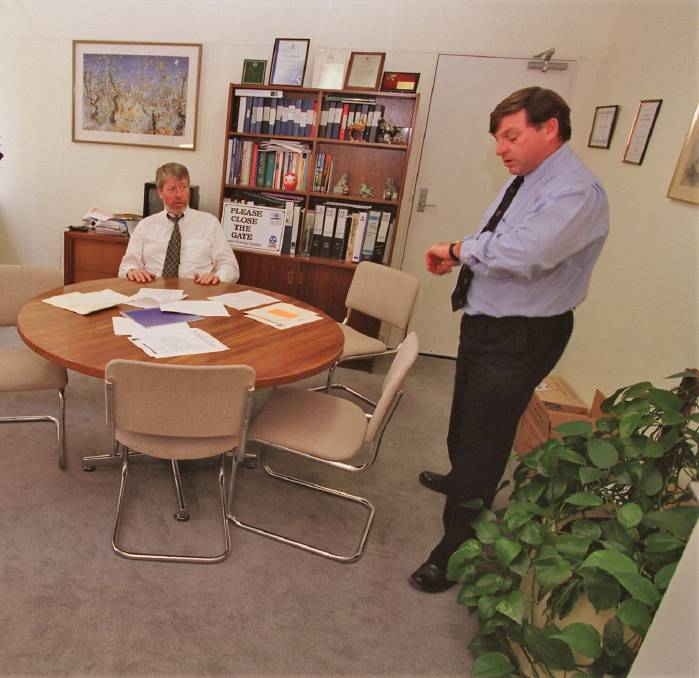 WHARF BUNKER: Former NFF industrial director, Paul Houlihan, and NFF president, Donald McGauchie, in their office bunker in Melbourne during the "War on the Wharves".

The organisation's leaders argued strongly against government protection of industries including agriculture which they said did more harm than good.

This was a far cry from the interventionist policies supported by many of their predecessors in the 1950s, 1960s and 1970s.

NFF formed the Cairns Group Farm Leaders Forum in 1998 in a bid to increase pressure for global farm trade reform.

The Cairns Group, now a coalition of 19 agricultural exporting countries including Australia, was established in 1986 to push for agricultural trade liberalisation during the Uruguay Round of global trade talks.

The NFF was the only advocacy group to get a hearing with United States President, George Bush Senior, during his visit in 1992 during which they expressed the Australian farm sector's deep anger at the US farm subsidy program. 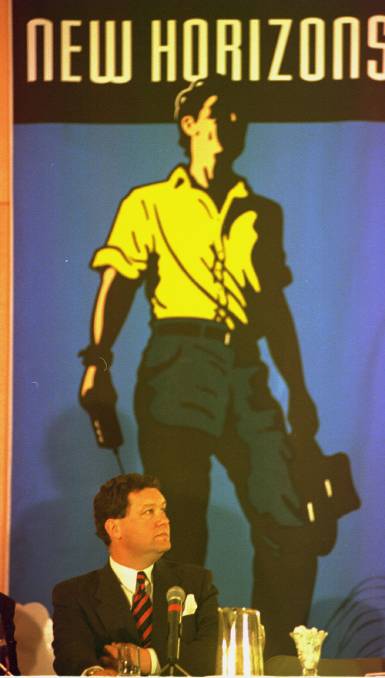 LOOKING AHEAD: Then Opposition leader, Alexander Downer, during the launch of the NFF's policy blueprint, New Horizons

A petition of more than 60,000 signatures was handed to President Bush during the meeting demanding he halt US agricultural export subsidies and to lobby other world leaders to do the same.

Between 2000 and 3000 farmers reinforced this message in a protest march on Parliament House.

When he found out Bush was going to visit Australia Graham Blight asked the then Prime Minister, Bob Hawke, to allow the NFF to meet with the President so they could tell him about the damage the US Export Enhancement Program was doing to Australian farm exports.

The subsidies were costing growers $40 on every tonne of grain they exported, he told Hawke.

Hawke was reluctant to schedule the meeting and even more concerned when Blight told him the NFF was planning a protest rally in Canberra during Bush's visit.

But Hawke relented and gave the NFF a 30-minute meeting with Bush and permission for the rally after Blight assured him the farmers would be well behaved.

Just before Bush's visit Paul Keating rolled Hawke as Prime Minister and he summoned Blight to his office to voice concern about the proposed farm rally.

Again Blight stuck to his guns. Blight attended a dinner for the President on the night before the NFF's meeting with him and a little earlier had found out the time of the meeting had been cut from 30 to 29 minutes.

When he was introduced to Bush he told him he was miffed their meeting had been cut by one minute because the NFF had a lot to tell him.

The President asked his aides to add back the lost minute (the actual meeting went for much longer than 30 minutes) and the two became friends.

The next day Bush promised the NFF his country would give advance warning of subsidies grain export sales so Australia could get in beforehand and do its deals.

That probably would have been an impeachable offence had word got out about what the President had said but the NFF helped cover up for Bush.

In 1993 NFF released a forward-thinking policy blueprint, New Horizons, which endorsed adjustment in rural industries as inevitable in the push for improved productivity and efficiency.

New Horizons argued for a stand-on-your-own-two-feet approach to farm risk management except in exceptional circumstances.

In 1997NFF lobbying also won the expansion of the One Billion Trees program, the biggest tree planting exercise in Australian history.