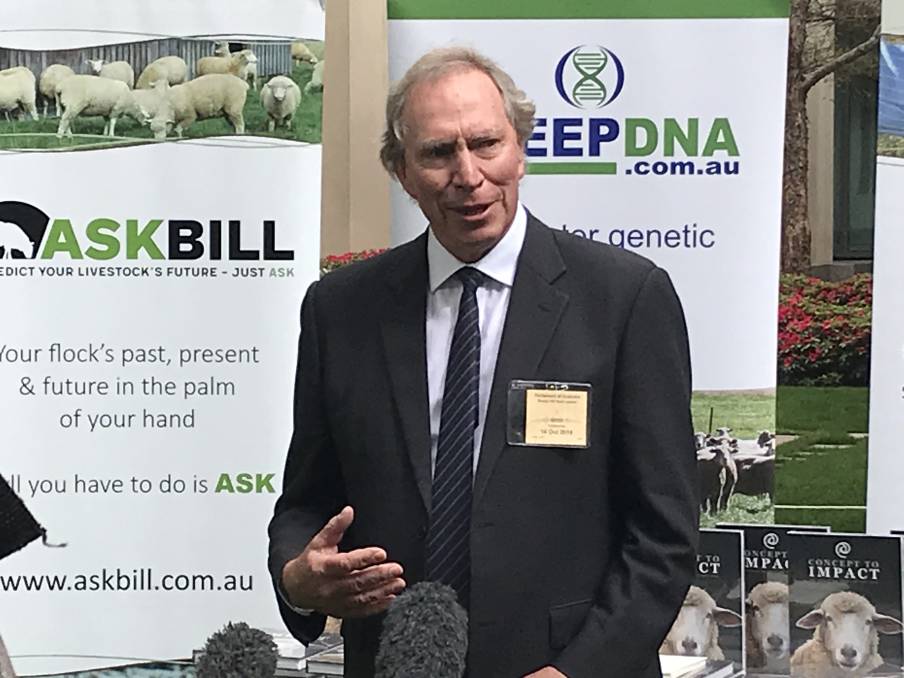 COLLABORATIVE SUCCESS: Professor James Rowe at the launch in Canberra of a book outlining the history of the CRC for Sheep.

The role of the Co-operative Research Centre for Sheep in the transformation of the industry from a basket case to an $8.6 billion a year success story has be...

The role of the Co-operative Research Centre for Sheep in the transformation of the industry from a basket case to an $8.6 billion a year success story has been documented in a new book.

The official 328-page history of the CRC for Sheep was launched in Canberra on Monday by the Minister for Industry, Science and Technology, Karen Andrews.

The CRC was launched in 2001 at a time when the Australian sheep industry was facing serious challenges.

It was funded for three terms of operation from 2001-19 by the Federal Government and its life coincided with a dramatic turnaround in the industry's fortunes.

Ms Andrews said the dramatic turnaround was achieved despite the national flock decreasing in size by more than 40 per cent over the period.

"On a per sheep basis, the real gross value of production has increased 2.6-fold," she said.

"While many factors have contributed to its change in fortunes, it cannot be disputed that one of the major drivers has been the work of the Sheep CRC in delivering transformational new technologies," she said.

"The Australian sheep industry has become a global leader in the use of genomic technologies to enhance productivity, has embraced the big data revolution with new predictive apps, and is delivering consumers with eating experiences that are second to none."

Sheep CRC chief executive James Rowe said the book, Concept to Impact: The story of the Sheep CRC 2001-2019, captured the scale of the industry collaboration and resulting transformation.

"While many factors contributed to this economic boom for the Australian sheep industry, it is safe to say that it hasn't happened by chance," Professor Rowe said.

"Everything that the Sheep CRC did was driven by an understanding of consumer preferences and industry needs so that we could enable the entire value chain to profit from delivering wool and meat products that consistently surpassed these expectations."

Tony Peacock, CEO of the CRC Association, said he hoped the book would provide a useful road map for other industries and research organisations to follow in delivering high-impact research for the Australian economy.

Dr Peacock said a good example was the Drought Future Fund - this complex national program would benefit from the principles established in the CRC Program to ensure a clear strategy based on collaboration and co-investment amongst stakeholders.

"Since the early 1990s when the CRC program was created the processes in managing the program have continued to evolve around the need to engage industry end-users in the collaboration and the importance of supporting innovation development through parallel education and training programs.

"There is increasing evidence that this CRC approach works to deliver integrated programs that have national impact," he said.

And while the Sheep CRC came to a close on June 30 this year sheep industry leaders are planning a forum to develop a new collaborative research organisation to continue the transformation into the future.

The book is available by contacting Polly Ward (pward20@une.edu.au) before October 25. After that date an electronic download will be available (www.sheepcrc.org.au) or hard copies via Abebooks.com.