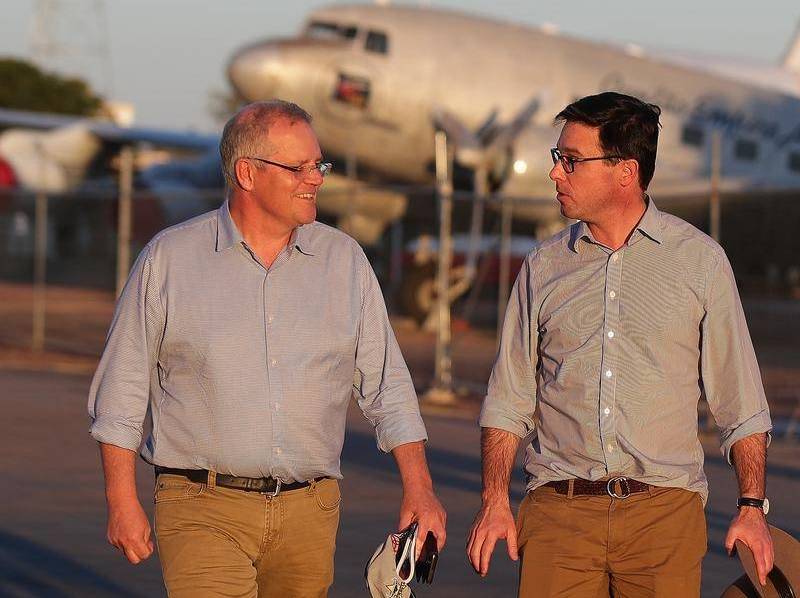 PM says government's policy has industry support, while NFF says more must be done to develop a national drought plan.

Scott Morrison's remarks to the National Farmers' Federation 40th Anniversary Gala Dinner, in the midst of a damaging dry spell in eastern Australia, will do little to quench the controversy over national drought policy.

The Prime Minister reiterated the argument that he and Drought Minister have mounted in recent months - that the federal government has a coherent national drought policy.

Mr Morrison even highlighted the NFF's "strong endorsement" of the government's approach.

"Right now, our immediate focus and priority is on dealing with and responding to the devastating drought," Mr Morrison said.

"Following the National Drought Summit we held a year ago, we have been rolling out the national drought response plan that was produced from that Summit, with the strong endorsement and support of the NFF, when Fiona (Simson) and I stood at the press conference.

"And we have been doing so consistent with the revised national agreement with the states and territories on drought that set out clear responsibilities between each level of government."

However, earlier on Monday NFF president Fiona Simson said lack of a national drought policy was one of the key challenges for farmers.

Rural advocacy groups have called for national drought policy that sets trigger points to kick off drought support, with a definitive list of responsibilities to get federal, state and local governments pulling in the same direction.

She was commenting on the NFF's Roadmap 2030, which is an annual report card on the sector's progress toward growing its annual value from $60 billion to $100b.

"Australian can go no further without a strategic and sophisticated approach to drought," Ms Simson said.

Earlier this month, when the federal government announced another extension of drought assistance, NFF president Tony Mahar said while the extra funding was welcome, rural economies need clear policy parameters so they know what would trigger the next round of support, when it would come and how long it lasts.

"We need a comprehensive and enduring national approach to drought that focuses on preparedness and resilience measures," Mr Mahar said.

"Hopefully that can reduce the need for impromptu in drought announcements."

Mr Morrison said the government's drought approach is not to set and forget and it would "continue to listen and refine (its) approach and provide assistance that's needed when it's needed".

The government had spent $300m on drought policy each year for the past two years, and would do so again this year, Mr Morrison said.

"Our drought response plan is clear, and it has three pillars - immediate action for farmers and graziers, support for the wider rural communities, and long-term resilience and preparedness.

"Our plan has also been informed through the extensive consultation, feedback and advice from our former Coordinator-General for Drought, Major General Stephen Day, earlier work of Barnaby Joyce as the Drought Envoy."

Mr Morrison said he would do his best to remain in touch with rural families, listen to their concerns and provide the support that's needed.

"Having spoken to hundreds of people in our regions over the past fourteen months, the difficult thing I struggle with - is knowing that no matter how hard you work, no matter the passion and diligence, there is so much about agriculture that is outside of our control - but we support each other because that is what we can do," he said

Mr Morrison visited Dalby, Queensland, to announce a new round of drought support including $30 million for farm families, $13m for selected local governments, and changes to make the Farm Household Allowance.

It included $33.42 million to resume the Drought Community Support Initiative, which can provide up to $3000 to eligible farming households, distributed by the Salvation Army, St Vincent de Paul Society and Rotary Australia World Community Service.

The Drought Communities Program was extended with $13m to provide drought-affected local governments with up to $1m for local infrastructure and other relief projects.

There was also $740,000 dedicated to Rural Financial Counsellors, to advise farmers on their financial options.

Eligibility criteria for the Farm Household Allowance will be simplified to encourage more people to access payments of up to $600 a fortnight.

The government says its drought funding is worth more than $7 billion.

That figure includes measures which cannot be classed as drought support funding - namely $5b in seed capital for the Future Drought Fund - which will deliver $100m a year for drought preparation from next year, a $1b in concessional loans through the Regional Investment Corporation, and $750m for the National Water Infrastructure Development Fund which can be spent on dams, irrigation schemes and other works.