As the National Farmers' Federation celebrates 40 years of leadership this week, we've been looking back at the highs and lows of each decade of advocacy. Here's a look at 2010 to 2019. 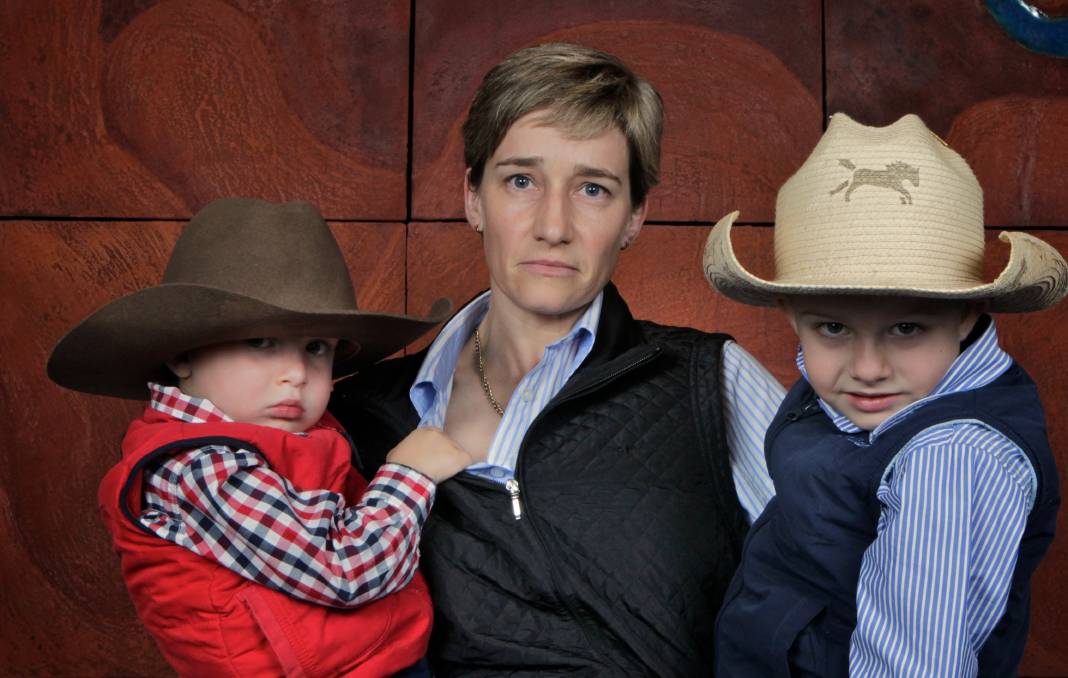 Northern Territory cattle producer, Emily Brett from Waterloo Station, with sons Lachlan, 2, and William, 4, represented the anguished human faces of the farm lobby's campaign for a speedy resolution to the live cattle export ban when they fronted a media scrum at Parliament House in June 2011. Photo: Andrew Meares / Fairfax

Despite glorious drought-breaking rain greeting the new decade, it didn't take long before signs emerged of tumultuous times ahead for for Australian agriculture.

Dramatic irrigation water cuts in the eastern Australia's agricultural heartland, the Murray Darling Basin; an industry-crippling ban on northern cattle exports, and vigorous debate about foreign ownership of farmland were some of the contentious concerns challenging the National Farmers' Federation.

Even the NFF's bullish expectations of almost doubling the value of farm productivity to $100 million by 2030 began wilting in eastern Australia as drought returned with vengeance, testing Queensland and northern NSW in particular.

Yet, free trade deals sweated on by farm leaders for the previous decade have lately underpinned surging export demand across numerous farm commodities categories from citrus to red meat, with farm export values hitting $48 billion in 2017-18.

A run of big grain crops in southern and western Australia and rising wool markets has helped keep cash flow and optimism upbeat.

The mood was, however, far from upbeat when the Murray Darling Basin Authority released its 2010 guide to a water sharing plan designed to secure the long-term ecological health of the Basin by recovering at least 4000 gigalitres of water entitlements from irrigators. The draft proposed water buybacks of up to 35 per cent, prompting estimates of up to 30,000 job losses and big farm productivity cuts.

Rowdy "consultation" meetings with the MDBA drew thousands and triggered public burnings of the guide in Griffith and Deniliquin in southern NSW.

The NFF was front and centre in developing the final contentious Basin Plan, demanding realistic cuts which did not obliterate the Basin's agricultural economy but offered the best possible all-round deal for farmers, regional industries and the environment.

The MDBA originally sought to recover 7600GL from farmers to give Basin ecosystems long-term sustainability, then acknowledged taking so much water would leave vast areas of inland eastern Australia socially and economically unviable.

"The farming sector didn't like the end result in 2012, but we got something we could work with - returning 2750GL was a vastly better number than the 8000GL originally proposed," said NFF president from 2010 to 2013, Jock Laurie.

"Huge pressure was on ag organisations to get a good outcome for farmers, but we also had northern basin with expectations that were quite different to the south.

"It was very difficult. Nobody got what they wanted."

Laurie's challenges ballooned in mid-2011 when the Gillard government caved to public and Labor Party pressure suddenly banning live cattle exports to Indonesia after a damning ABC Four Corners report about the $300m annual trade and cruel stock handling processes in some meatworks.

"The northern cattle industry was gravely hurt by the ban for years, and the publicity," Laurie recalled.

"Overnight almost everybody in agriculture felt portrayed as not very nice people.

"We had to move very fast to get the government and the public to understand the whole issue and the devastating flow-on cost to producers across Australia."

Livestock were left stranded in loading yards while their owners scrambled to find food, shelter and alternative locations for them; supply chain businesses collapsed and export market relationships soured. 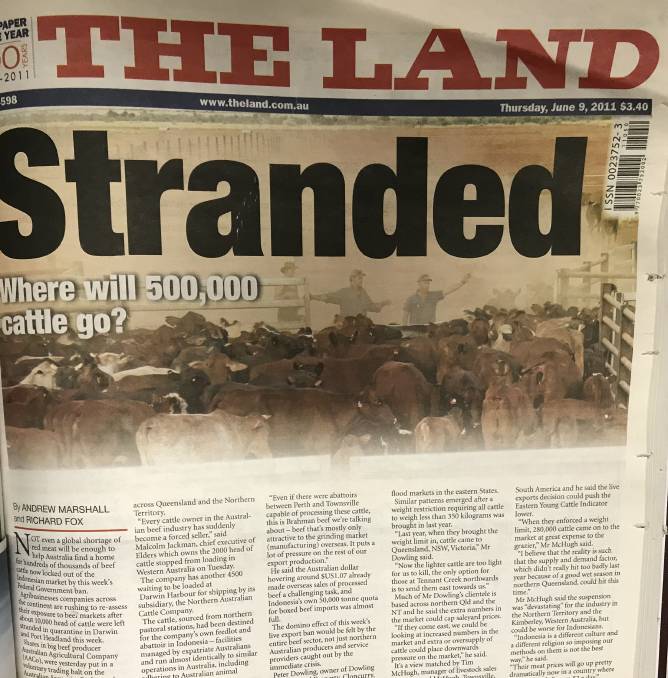 Stranded: Rural media coverage of the export ban was extensive and eagerly followed in farming and metropolitan areas as the complexity and cost of the crisis became apparent.

Later, in 2014, NFF used its Australian Farmers Fighting Fund to assist a class action against the government on behalf of devastated producers.

Laurie said while Ludwig had many justifiably angry critics because of the ban, to the minister's credit he also quickly recognised the enormity of the cost to the beef industry and strongly supported efforts to re-establish the trade, driving hard deadlines and discussing how best to deal with the problem politically.

"I spent a lot of time with Joe Ludwig and saw a very different side to the man than most."

Instead NFF proposed a carbon farming initiative, adopted by Canberra as a voluntary carbon abatement scheme in late 2011.

It rewarded farmers who set aside country and vegetation to act as a carbon sink, or those with emissions reductions schemes such as piggeries or dairies capturing effluent methane as fuel. National Farmers Federation president, Jock Laurie, on his NSW property, Deloraine, at Walcha in 2012, the NF- supported Australian Year of the Farmer.

After working on numerous trade diplomatic missions, NFF was quick to applaud immediate South Korean tariffs cuts in horticulture products such as potatoes (down from 304pc to only 27pc), and cherries, dry grapes and wine (to zero) and a 15-year phase in for beef, dairy products and barley.

However, the Japan deal also disappointed farmers, providing limited or no new market access gains for dairy, sugar, grains, pork and - like Korea and China - rice. 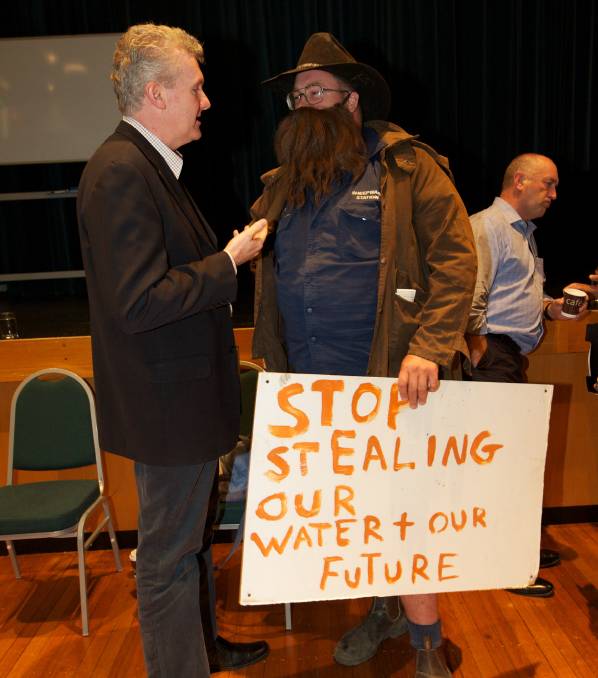 The Chinese deal in late 2014, was a "cracking agreement which surpassed expectations on tariff reductions for dairy, beef, sheepmeat and horticulture exports".

"China is now Australia's biggest agricultural export market, taking 30pc of what we sell overseas and providing the market confidence that has helped a lot of producers cope with the current drought."

Drought also was very much on NFF's agenda when it pressured the new Coalition government to adopt a suite of resilience policies in 2014 including doubling farm management deposit thresholds to $800,000 and incentives for on-farm infrastructure spending, including feral animal fencing.

In 2016 NFF lead the establishment of the Regional, Rural and Remote Communications Coalition, pushing for bush communications priorities to be addressed by government, including expansion of the mobile blackspot upgrade program the arrival of the NBN Sky Muster satellite service.

North West NSW grain and beef producer, Fiona Simson, notched up a historical achievement for herself and NFF when elected as the body's female president in late 2016, having previously been the first female to lead NSW Farmers. At the same time intensive NFF lobbying in the corridors of Parliament House paid off at the last minute, just before parliament adjourned, when then Treasurer, Scott Morrison, compromised on controversial 2015 budget plans to tax backpacker workers 32.5pc.

NFF's campaign started a year earlier, but by September the government still refused to concede less than a 19pc tax rate for working overseas holiday makers earning less than $37,000 a year, while a mischievous opposition and cross bench MPs sought 10.5pc or less.

With horticultural crops sitting unpicked because of months of bad publicity about the tax risk to visiting workers, farmers feared the worst from the political stand-off, branded "the nightmare before Christmas" by Queensland's Growcom.

The backpacker tax saga eventually ended with the government accepting 15pc after buckling to pressure from groups as diverse as Cotton Australia, Ausveg and the produce wholesalers. 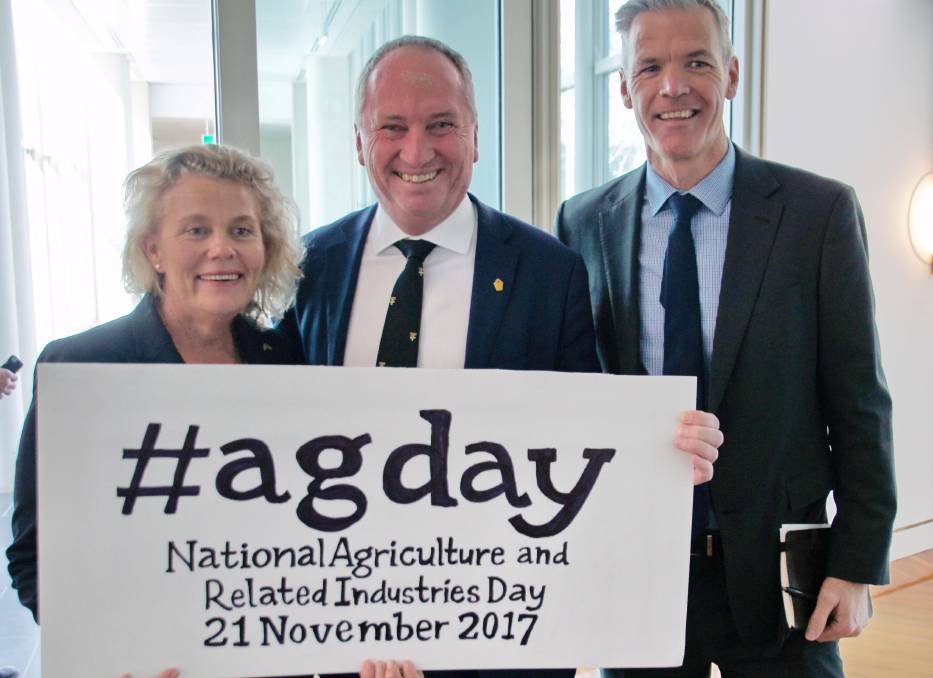 Elsewhere on the horticultural front the NFF's farmers fighting fund, successfully backed an employer in a precedent-setting case about piecework rates in the mushroom industry, confirming employees should be paid more for picking more produce, but less if they were less proficient.

Last month the Federal Court of Australia ruled the pay rate for workers picking less should not revert to an hourly schedule.

Advocacy by the NFF and its members saw the government commit $8 billion to the development of a inland rail system from Brisbane to Melbourne.

In 2018 NFF launched a bold vision for agriculture to be a $100 billion industry by 2030 with support from both sides of parliament and industry bodies such as Agribusiness Australia.