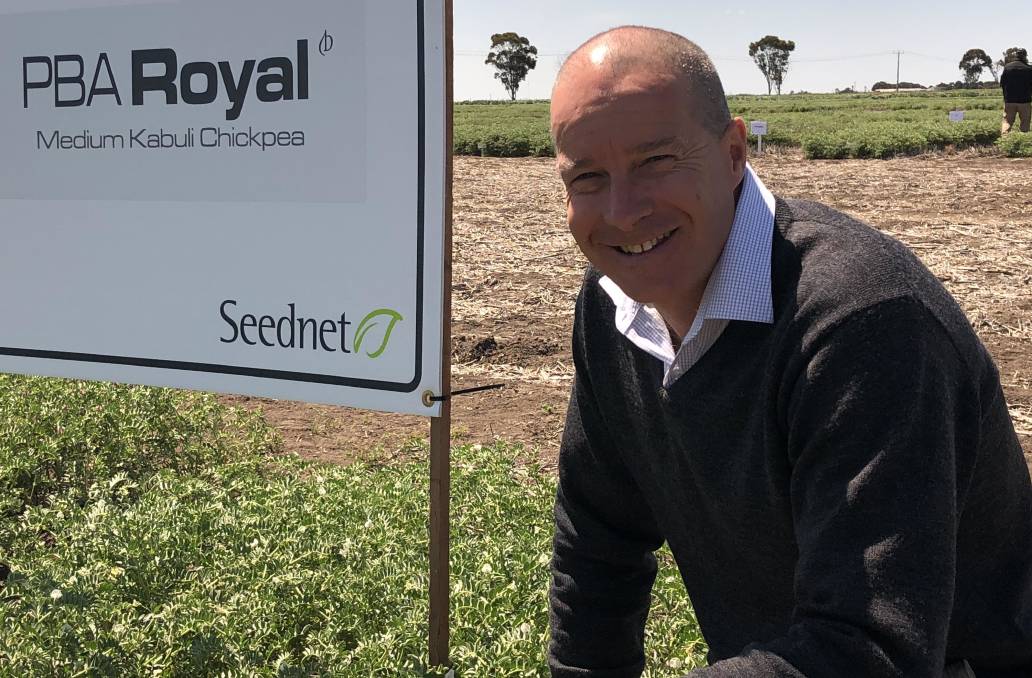 A new kabuli chickpea is likely to be an alternative to the Genesis 90 variety across both the northern and southern chickpea zones.

A NEW kabuli type of chickpea has hit the market with the potential to be widely adapted right across Australia's chickpea producing regions.

Not only will the cultivar suit traditional kabuli growing regions in Victoria and South Australia but it will give a different option to pulse producers in Australia's desi chickpea heartland in northern New South Wales and Queensland.

Kabuli varieties enjoy a premium over desi lines because they are bigger and lighter and more suited to the whole food market rather than being turned into flour.

Mr Crane said PBA Royal could safely be grown as far north as Roma right through to the south-east of South Australia.

He said Seednet was hopeful the Pulse Breeding Australia (PBA) developed line would provide an alternative to the Genesis 90 variety that constitutes the vast majority of kabuli plantings in Australia.

"PBA Royal has performed well in terms of yield against the Gen 90s, especially in medium to high yield potential environments, so in excess of 1.5 tonnes a hectare," Mr Crane said.

"There is also an advantage in terms of seed size, with the Royals coming in at around 8mm in diameter which is larger than Genesis 90s."

"There are some caveats, you have to choose your paddocks really carefully as it is very susceptible to phytophthora root rot (PRR) as are all kabuli lines.

"That disease is more prevalent in the north, but with careful paddock choice, such as not planting in paddocks that have a PRR history or are prone to waterlogging it can well and truly be overcome.

"Having that other option to get a premium over desis, especially in the years when the premium opens right up due to a shortage of kabulis, is something I think the market will be very interested in."

"We have noticed that in spite of the Indian tariffs the demand for kabulis from places such as Pakistan and Bangladesh has not really let up so the market is definitely there."

In terms of the major disease of chickpeas, PBA Royal is rated moderately resistant to ascochyta blight (AB) in the northern zone and moderately susceptible in the south, a similar profile to Genesis 90.

"Similar to other chickpeas farmers are going to have to monitor for AB and make timely fungicide applications to maintain yield potential," Mr Crane said.

"However with that good seed quality and the prices you can get I think it certainly something a lot of growers will look at."