More than 50 secondary school students from Gippsland and surrounds participated in a two-day Industry Immersion Program. 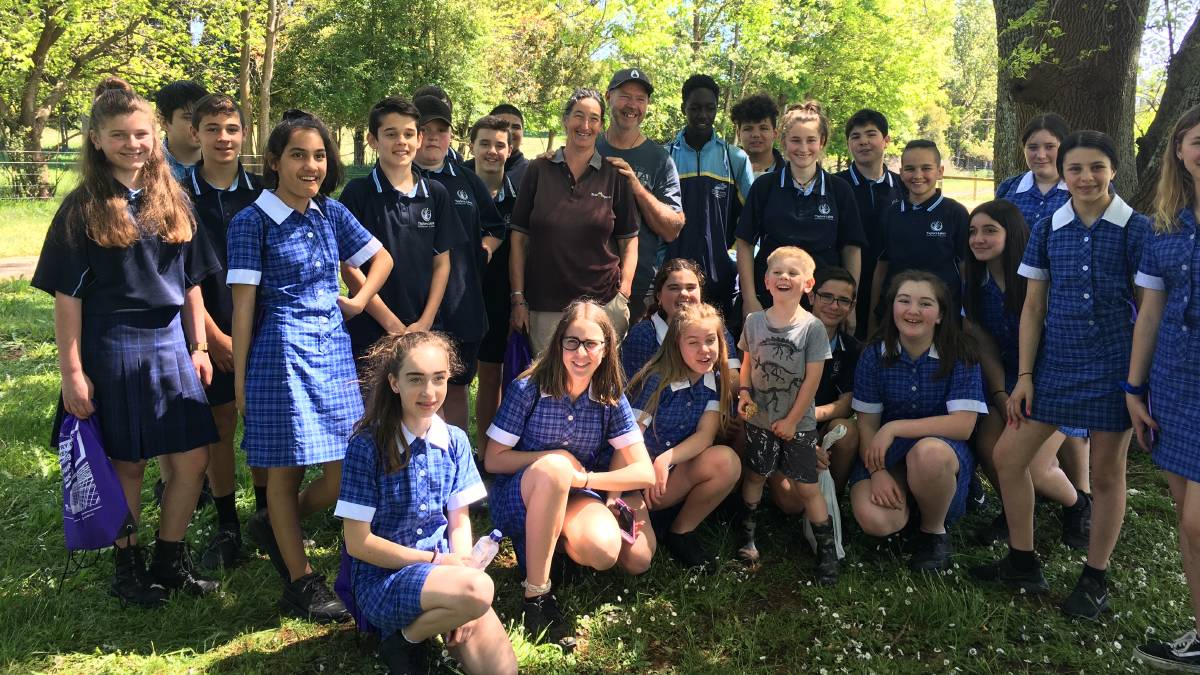 More than 50 secondary school students from Gippsland and surrounds participated in a two-day Industry Immersion Program recently which took them to four different food producers across the region, including a dairy.

A large-scale vegetable grower in Middle Tarwin; a Leongatha dairy business which milks 1100 cows daily; an organic enterprise in Ellinbank that's been farmed by the same family for 150 years, and a third generation apple orchard in Drouin, welcomed the students onto their farms and into their businesses.

The immersion experience was hands on when the students arrived at Jelbart Dairy - a second generation family business in Leongatha that milks 1100 cows every day of the week.

As well as allowing the students the fun of interacting with a large enclosure of playful calves, owner Tim Jelbart, who took over the farm business from his parents, gave the students a new appreciation of what it takes to produce a litre of milk, walking them through the feed process and the labour involved in milking their large herd across split shifts that start at around 2:30am every day and finish at 9pm each night.

Dr Patison said the information shared by Mr Jelbart was likely to have an ongoing impact on the milk choices the students make, and that it certainly altered some negative perceptions of the industry they had prior to their experience at Jelbart Dairy.

Hania, a Year 11 student from Mount Alexander College, said the visit had changed her mind a bit about agriculture and that she really liked the science part of the industry.

"I was surprised by the amount of technology that they use on a day-to-day basis on both the dairy farm and in the orchard. I found everything really interesting, I got a lot of information, and found out about a lot of new things," she said.

For a number of these students, this was the first time they had actually ever seen a cow, and many were surprised at how big they can be.

Getting up close to cows and getting a ride in a hay trailer ranked at the top of the list as one of the biggest highlights of the day, along with learning that not all eggs comes from chickens in cages after seeing free range chickens roaming the paddocks under the watchful eye of the resident Maremma guard dogs.

The tour started off on Wednesday with a trip to celery, leek and baby leaf producers Schreurs and Sons, where the group was hosted by third generation farmer Adam Schreurs, who, together with his wife Donna and farm manager Craig, had students intrigued with the level of science, research and planning involved in vegetable production.

Ranging in age from Year 7 to Year 11, the food science students came from South and West Gippsland and the Baw Baw Shire.

Jack, a year seven student from Mount Alexander College hadn't considered a career in agriculture, but these farm visits may have changed his mind.

"I was surprised how they plant things and how big the paddocks are - and now I'm thinking about maybe studying food more," Jack said.

Mr Schreurs said the students had no idea there was so much more science involved than the actual physical practice of planting seeds.

In learning that, they were able to better understand the broad cross section of potential jobs and career opportunities in the sector, from skilled labour through to scientists and people with PhD's.

A forward thinking, progressive producer with a strong focus on plant and soil health and environmental sustainability, Mr Schreurs' insights definitely made an impact on the group, as observed by group coordinator Dr Kym Patison, from CQUniversity Australia.

"I'm pretty sure that when these students next see a bunch of celery or spinach at their supermarket, they're going to give a lot more thought into the effort and planning that has gone into growing it and getting it to their plate," she said.

Mr Schreurs was delighted to host the school group and sees activities like the Industry Immersion program as a vital contribution to the future of farming.

"I think it's important to not only share our message on how we do things well, and that farmers are not environmental vandals as portrayed in some areas of the media and other places, but also just to show what we do and how we do it," Mr Schreurs said.

"We need young people in the industry so if I can encourage only one of them, it's job well done."

While the primary objective of the Immersion days was to give students an idea of the career and job opportunities available to them in agriculture, the activity also provided some basic knowledge about animal biology and behaviours, making them aware of things like cows need to be milked daily often twice; prior to this on-farm experience, some thought that it might be once every couple of days.

Their program kicked off at Elderslie Organics at Ellinbank, where the students piled into the back of a hay trailer to visit some cows in one of the paddocks and begin their learning experience of how an organic enterprise operates, how they manage their animals and their pastures.

Elderslie Organics is a fifth-generation farm, the land owned by the family for the last 150 years, and with current owner Peter's three sons actively involved in the business, that tradition looks set to continue.

The final visit was to Fankhauser Apples in Drouin. Owners Liz and Glynn Fankhauser, are third generation orchardists and together with their son Brad, grow around 1000 tons of apples each year.

The tradition of Gippsland farms being family owned and operated was an important model for the students to observe, and by talking to the generation currently running the business, they got a good understanding of the value of what has been built on over many decades, with years of trial and error, knowledge of the land, process creation and tireless effort resulting in the successful operations that they are inheriting and running today.

In the words of Brad Fankhauser as he pointed out the many rows of apple trees on the farm at Drouin - "this doesn't just appear overnight".

Along with the students, there was a significant benefit for teachers who attended this program, with the access to a lot of "hands on", in the field information that will be a significant help in explaining concepts and the industry to students.

Food & Fibre Gippsland Acting CEO Dr Nicola Watts was delighted to see so many students getting access to an on-farm experience.

"While one day is not going to change the world - these industry immersion days put together by our GIPPYAg Project Manager Dr Amy Cosby and her colleague Dr Kym Patison from CQUniversity has certainly created a new level of awareness amongst these students," Dr Watts said.

"It's definitely triggered a deeper appreciation for how and where their food is produced, and being able to talk to the producers face to face about the diverse number of opportunities that are available across the industry is a great start to attracting the next generation to consider a career in the food and fibre sector."

An initiative of Food & Fibre Gippsland in partnership with CQUniversity Australia, the program was made possible via the Victorian Government funded GIPPYAg Project.