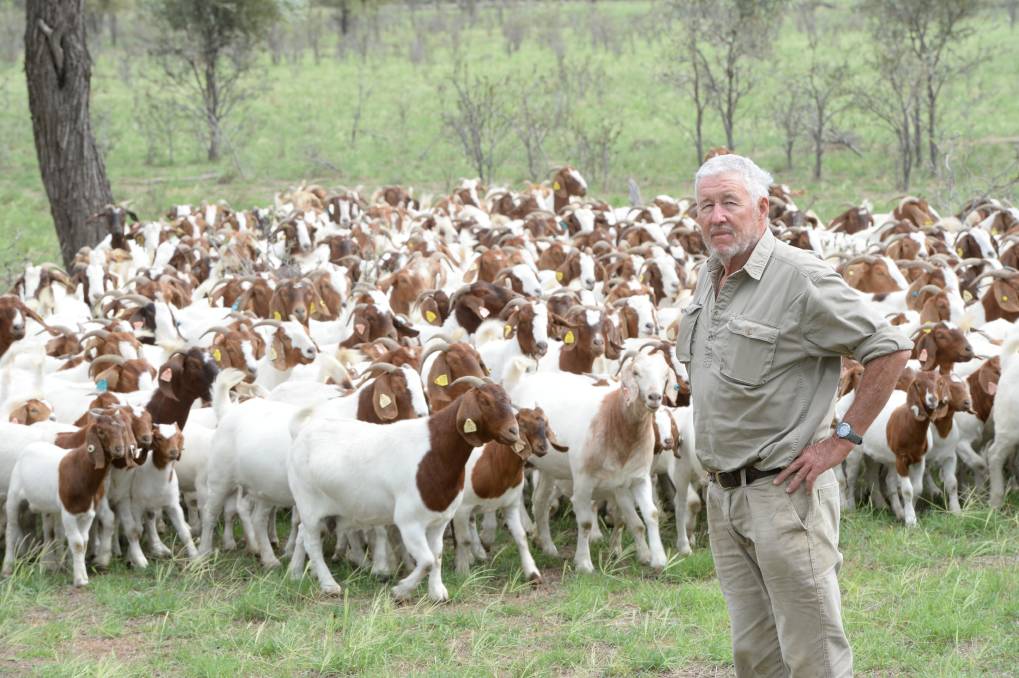 WE'LL COME TO YOU: Quandialla, NSW, Boer goat breeder, Colin Ramsay, will truck 50 bucks to St George next week for an auction in response to growing demand in south west Queensland.

St George will host what is believed the first auction of Boer goat bucks in Queensland at the end of next week.

A special auction sale of Boer bucks will be held at St George at the end of next week in response to hot interest in the expansion of goat production across south west Queensland.

Sale organiser, Anthony Hyland, from Grant Daniel Long (GDL) at St George, believes the auction will be a first for Queensland.

The sale at St George showground on Friday, November 22, will be held in conjunction with an auction of White Dorper rams.

Both the bucks and rams will come from East Bland Station, Quandialla, in central west NSW where Colin Ramsay runs the Dudauman Park Boer Goat stud and his son, Rob, operates the Amani White Dorper stud.

"There is such vigour and energy in the goat business in south west Queensland we thought we would come up and offer them on the spot," Colin Ramsay said.

"The drought doesn't seem to be slowing down these Queensland goat guys, they are just going for it, it's fantastic."

Mr Ramsay has been breeding Boer goats for around 20 years including composites designed for tough arid rangeland conditions.

"They look like Boer goats but most are composite 'percentage' goats with high but differing degrees of Boer blood," Mr Ramsay said.

"During the past 20 years we have continually infused the best genes we can extract from rangeland nannies and other types into our mainstream breeders, crossing up repeatedly by putting the most productive bucks we can find or breed over our females."

The Ramsays will be trucking 50 Boer bucks and 60 White Dorper rams to St George for the sale which will be interfaced with AuctionsPlus.

Mr Hyland from GDL said interest in goats across south west Queensland was driven by producers looking to diversify and cash in on high goat prices.

The rush to build exclusion fencing around properties in the region to keep out wild dogs and other pests was also making goats and sheep more attractive.

Exclusion fencing made management of feral goat populations easier including the marking of feral billies which could be replaced by more productive Boer bucks.

He said many producers had got out of cattle in the past 12 to 18 months because of seasonal conditions.

Pimelea weed was also widespread and toxic to cattle and became a major problem if a dry summer was followed by a wet winter, Mr Hyland said.

Sheep and goats didn't appear to be affected by the weed, he said.

Goats suitable for slaughter were now fetching $9.60 at Charleville abattoir while there was also a strong trade in weaner goats across a wide region for breeding and fattening.