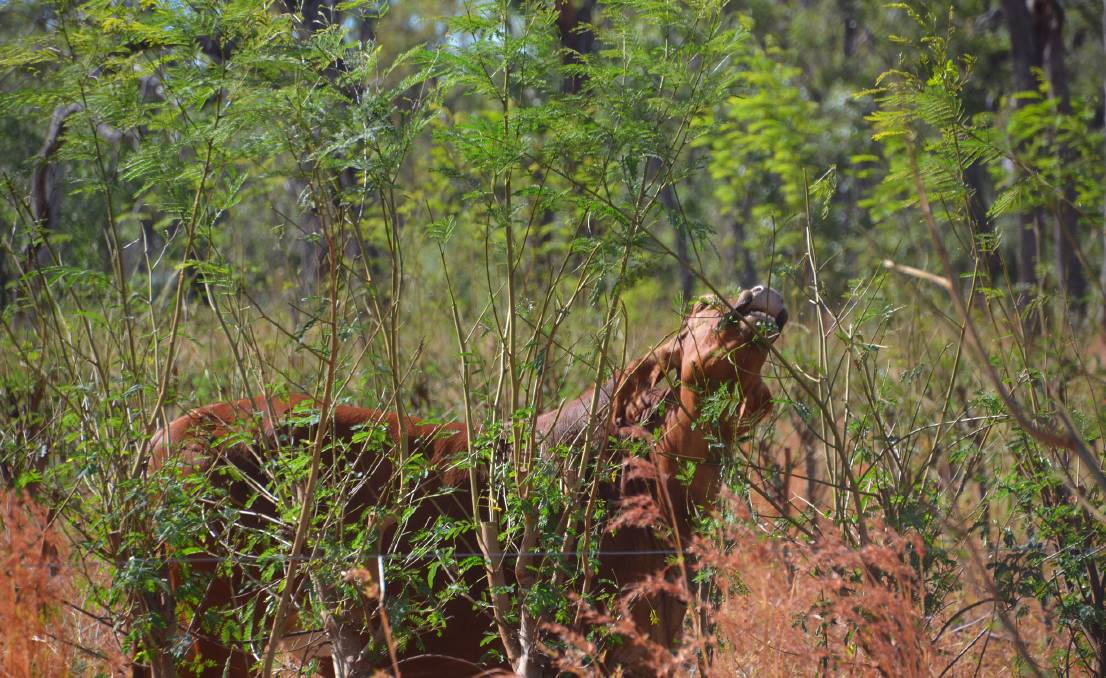 POTENTIAL: Grazing tropical legumes containing secondary compounds like tannins, such as leucaena, has been shown to mitigate livestock methane.

Science is delivering pathways to carbon neutrality but there are concerns.

FROM manipulating the diets of cattle to actually modifying animal rumens, the science coming down the pipeline is showing it is possible to change the methane profile of the livestock industry.

Delivering the much-touted carbon neutral red meat industry within the next decade certainly appears possible, judging by the research outlined at the big science event for tropical agriculture, TropAg 2019, in Brisbane this week.

However, concerns were expressed that the current dominant pathway of producers extensively using soil and tree carbon offsets to reduce their net emissions would not cut it with the consumer in the long-term.

Ultimately, society wanted the red meat industry to reduce its emissions of greenhouse gases via a low or even no-methane animal.

Those leading the charge in the science world say that won't be achieved with the traditional three-year research funding paradigms and without genuine global collaboration.

Professor Richard Eckard, who heads up the Primary Industries Climate Challenges Centre at the University of Melbourne, told the conference livestock production globally was facing the dual challenges of increasing productivity to feed a growing world population, while also reducing its emissions of the greenhouse gases methane and nitrous oxide.

The 21st Council of Parties Paris Agreement has the world's livestock business aiming for carbon neutrality by 2050, while in Australia the beef and sheepmeat research body Meat & Livestock Australia had set a target of 2030.

A number of beef and sheepmeat operations and brand owners are now offering carbon neutral products - but most are doing it by buying offsets.

Research has shown significant reductions in enteric methane from ruminants are possible but the work needed for both large and small scale livestock systems to achieve carbon neutrality by 2050 was still required, he said.

Quite simply, it had to be a global priority, he argued.

Prof Eckard outlined a number of pathways the cattle industry might take to get there.

Grazing tropical legumes containing secondary compounds like tannins, such as leucaena, black wattle and lotus, has been shown in trials to have strong potential.

Leucaena reduced methane emissions intensity by up to 20 per cent in research conducted by the National Livestock Methane Project from 2010 to 2015.

Other studies had demonstrated up to 21pc less methane per kilogram of dry matter consumed via black wattle and five to 15pc via lotus.

Rumen modification included the use of methane inhibitors like 3-nitrooxyproponal (3-NOP) and a concept known as early life programming.

3-NOP, expected to come through registration in the next 12 months, works in the cow rumen by preventing bacteria from converting carbon into methane.

That is, removing non-essential microbes in ruminants can create a rumen in future generations which naturally does not have those methane-producing microbes.

Meanwhile, methanogen surface proteins have been shown to be immunogenic in ruminants, Prof Eckard said.

A methane vaccine has been in research for 20 years now, which reiterates the need for a more longer-term research funding appetite.

There is some evidence methane emissions are inheritable so breeding is another pathway however producers say low methane emission traits are often not compatible with other valuable production traits.