The drought is unlikely to break this year, but there are better prospects for rain early in 2020.

The drought does not look set to let up this year, but a breakdown in the IOD positive event early next year means better hope next year.

DROUGHT stricken residents of eastern Australia will have to wait until at least the start of 2020 for relief from the big dry according to the latest Bureau of Meteorology (BOM) climate outlook.

The BOM outlook again has a drier than average outlook for the upcoming three months for northern NSW and Queensland, however the odds are in favour of wetter conditions over a large proportion of the western half of the nation.

While in the short-term the news remains grim, it is slightly better as we head into 2020.

The BOM outlook is less severe from January onwards, with only parts of south-eastern Queensland and Central West NSW having statistically significant chances of receiving less than median rain for January through March.

The BOM is attributing much of the blame for the ongoing dry on the continued vice-like grip of the Indian Ocean Dipole (IOD) positive event. 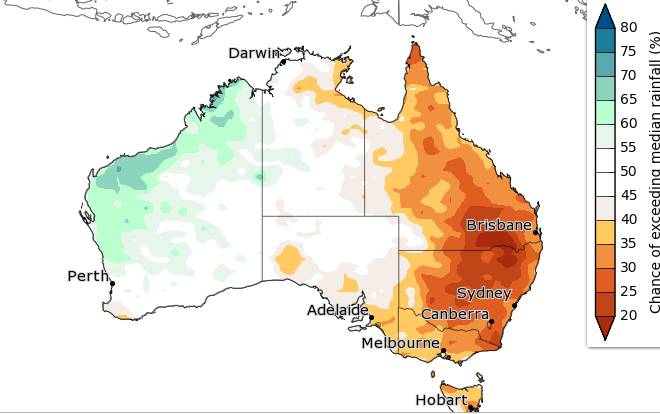 The seasonal rainfall outlook is not great viewing from December to February for those on the east coast.

The current IOD positive is one of the strongest on record and while the events have usually decayed by the start of summer this one looks set to continue to influence our weather through December at least. 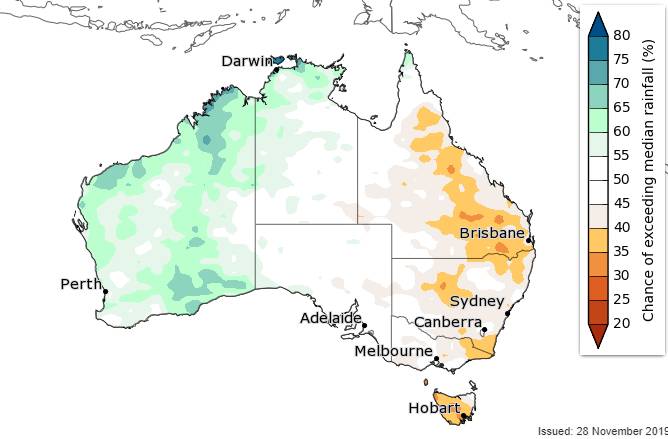 The breakdown of the IOD positive means there is better chance of average rainfall from January to March.

December rainfall is likely to be markedly below the median with all but north-west Western Australia significantly more likely to be drier than average.

In most of the seriously drought hit areas there is as little as a 20pc chance of exceeding the median December rainfall.

There is, however, some good news on the horizon, with the event showing signs of gradually decaying over the past month.

In the west, however, it is a different story, with up to a 70 per cent chance in some parts of exceeding median rainfall for December-February.

Temperature wise it is likely to be hotter than average.

The BOM noted that while climate drivers were influencing the weather there was also an impact from climate change pushing temperatures up.