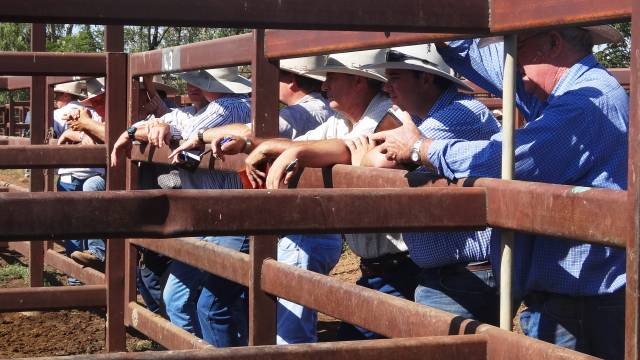 CATTLE are flooding onto the market as the closing date for 2019 saleyard business draws closer and producers are forced to make a call further out than the week-by-week turnoff decisions they've faced for so long.

The big numbers offloaded across Queensland and NSW in the past fortnight have defied the expectations of analysts and agents, given the already depleted state of the herd.

Despite strong export beef prices, which has given support to heavy cattle, the oversupply has dragged the young cattle market down. The benchmark Eastern Young Cattle Indicator dropped below 500 cents per kilogram carcase weight on Friday, down 14c on a fortnight ago and 24c on the same week last year.

The storms that have arrived have been too few, too small and too far between, with dry-to-desperate conditions persisting across most of Eastern Australia's cattle producing country.

"From Blackall to Tamworth, there is no area where anyone is having an average season," said Ashley Loveday, Elders Dalby.

"It's now past the point where most can hang on any longer, particularly going into a period where they won't have the option to sell.

"The abattoirs are full until the end of the year and that has also had a flow-on effect to saleyard prices."

Mr Loveday said if there had not been a decent, widespread break come the new year, producers would keep cutting into their herd - there was no choice.

Mecardo analyst Angus Brown reported the 80,000 head that East Coast yardings hit at the end of November was a record for spring and only the second time volumes had got that high this year.

He said NSW and Queensland lead the turnoff, up 31 per cent and 68pc on last year respectively.

Inverell agent Tom Oakes, CL Squires & Co, said some producers in northern NSW were now back to a third of their herd and 'if it's still hot and dry after Christmas they say the last of them will go.'

People in that situation would likely stay out of cattle for while, he said.

"On the black soil country, they will go cropping for the quicker cash flow or some will go into sheep," he said.

ALSO IN BEEF: The facts every cattle producer should know

Thriving outside the comfort zone

What rules the home trade for red meat

"The beef cattle herd is now around three million head below its peak and the cow herd around 1.5m below," he said.

"Given that, when it rains, some of the wild-sounding predictions about feeder cattle prices in Australia may seem more or less domesticated."

Some analysts have touted an EYCI in excess of 800c/kg when the season breaks.

"The turnaround on rain will be 360 degrees," Mr Loveday said.

And while producers have cut their herds dramatically and spread cattle out, meaning smaller amounts of feed will go further, agents still believe it will now take more than average summer rainfall to get restockers moving.

"This northern wet season probably isn't going to be the trigger for a big price rise," Mr Gorey said.

Mr Brown said in the south, before-Christmas turnoff trends were more normal. At this stage, it was expected southern weaner sale numbers in January would be on par with last year.

However, the strong prices for finished cattle on account of exceptionally good global demand, combined with the better season, was seeing higher numbers of heavy cattle coming out now, he said.

The spread between heavy finished steers and weaner steers remains at some of the highest levels in 10 years, Rabobank's latest Beef Quarterly says.

Many cattle sales now include a high proportion of quality breeding stock, which will have a lasting impact on future beef production capacity, Rabobank analyst Angus Gidley-Baird said.

Cow slaughter is currently 18pc higher than 2018, reflecting the ongoing liquidation of the cattle herd.

Mr Gidley-Baird said producers were trying to hold to what breeders they possibly could in order to have a business next year.

Buying cattle with the view to flipping them currently appears unheard of.

Cattle moving through the saleyards in the west also surged to near peak levels in the last few weeks of November, with strong young cattle prices attracting bigger yardings, he reported.

While the west has also experienced below average rainfall across 2019, a slightly better autumn rainfall and some restocker activity provided support to the market, with the Western Young Cattle Indicator remaining consistently strong and above the 500c/kg mark since May, Mr Cheetham said.