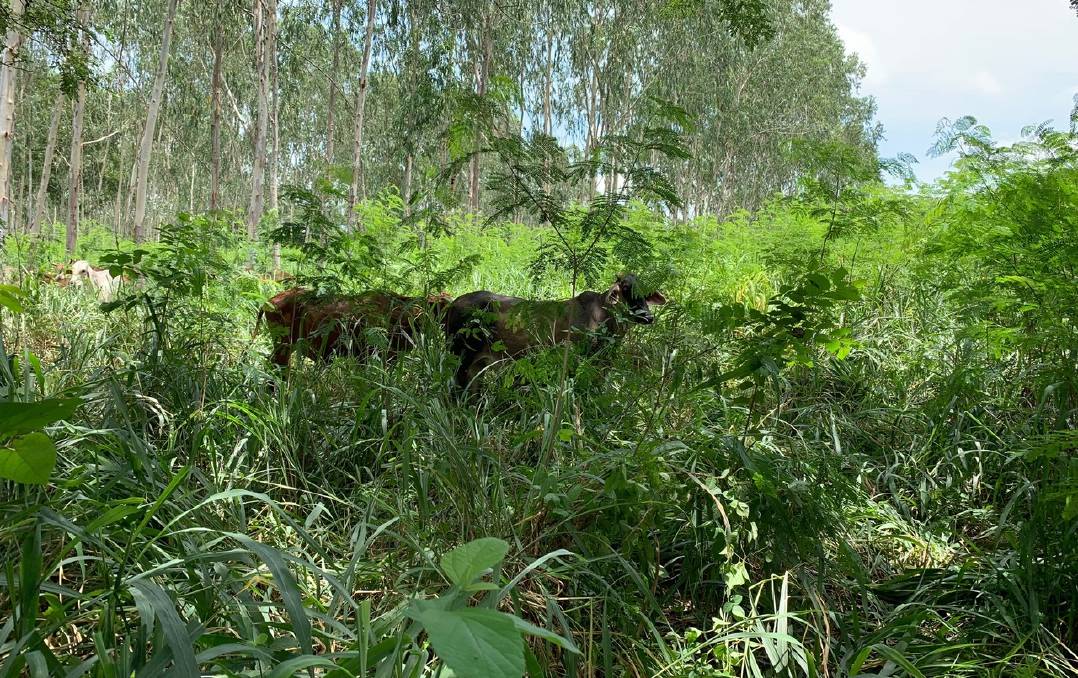 REGENERATED: Cattle in the rejuvenated paddocks at Guadalajara in northern Colombia.

WITH the view to investigating new ways to extend the application of leucaena plantings and grazing systems in Queensland, a group of eight producers has just wrapped up a tour to Colombia and Paraguay to view silvopastoral systems and attend the Tenth Global Silvopastoral Congress.

Whilst leucaena was the primary reason, the producers experienced a range of grazing systems using legumes, hardwood trees and a variety of animals, all in successful farming and grazing systems that improved the soil, productivity and long term viability of the farms visited.

The Leucaena Network Executive Officer and tour organiser Bron Christensen said the idea for the visit arose from a conversation at the International Leucaena Conference held in Brisbane in November last year. 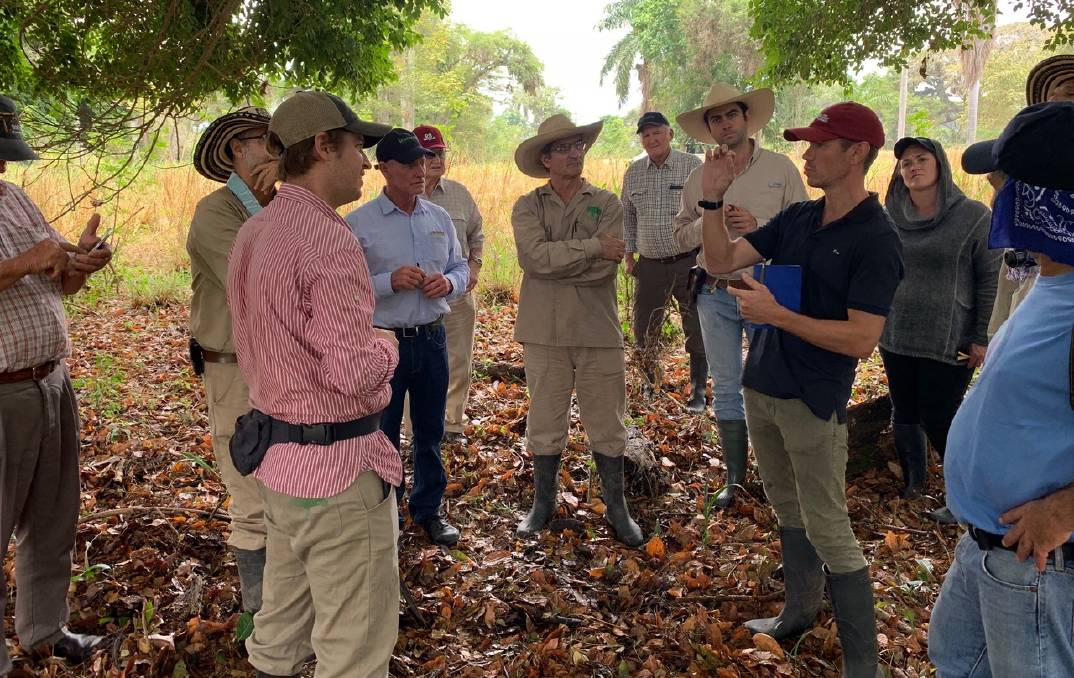 "Julian Chara and Alvaro Zapata Cadavid from the Centre for Research into Sustainable Agricultural Systems (CIPAV) in Colombia attended the ILC and following a discussion about leucaena and its application in silvopastoral systems, they issued an invitation for Network members to visit and view, first-hand, the work they were undertaking in land restoration," she said.

"Julian and Alvaro organized the Colombian visit, specifically for Network members, where we had direct access to farms and the farm managers, owners, staff and families as well as having CIPAV personnel, who were directly involved in the activities, with us to provide personal translation services.

"We could not have imagined, nor asked for, a more comprehensive or enjoyable visit."

Delegates were assisted in their attendance with a grant to foster producer experiences and information provided by the A W Howard Memorial Trust. 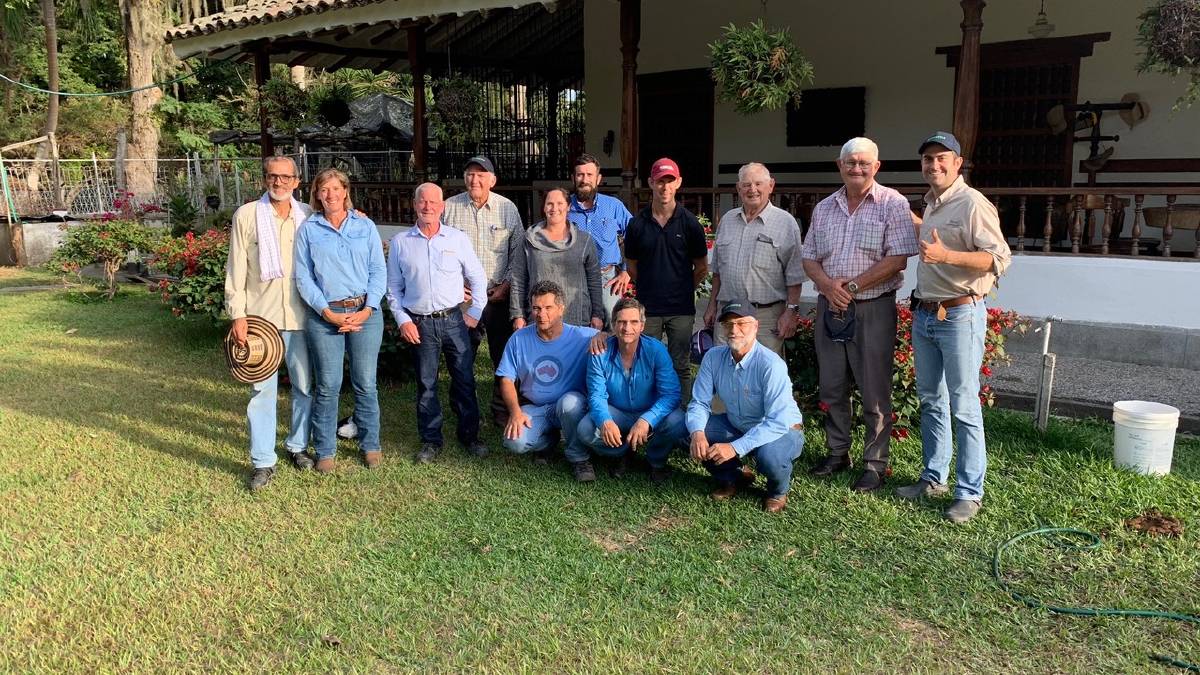 The Colombian visit included several properties in the Valledupar region in northeastern Colombia where vast tracts of land show high degradation caused by the abrupt cessation of Colombia's cotton industry more than 30 years ago.

Work undertaken by CIPAV, in collaboration with farm owners and managers has transformed the barren landscape into highly productive grazing land with eucalyptus trees, leucaena and grasses providing high quality forage and shade for the predominantly Bos indicus cattle herds, and the trees providing a secondary income from timber.

The more prosperous Cauca Valley region in western Colombia was also visited. Here, silvopastoral systems had been utilized for many years or generations and the properties demonstrated both strategic strategic collaborations within their community and vertical integration through the addition of processing plants for milk and panela, a raw form of sugar.

The final property visited in the region, El Hatico included a stunning avenue of mature mahogany trees, which the family are reluctant to harvest. Frank Miller, CEO of African Mahogany Australia, was able to assist, providing advice on the potential benefits of thinning the plantings and strategies for new plantings.

"It was enlightening to meet this eighth generation farming family where the grandfather had secured income for his family 50 years into the future with the mahogany plantings," Mr Miller said.

"They were magnificent trees however with structured management the family could continue to enjoy the best of the trees which would benefit from the increased space whilst staggered new plantations were introduced."

The delegates joined the pre-congress tour to the El Chaco region in western Paraguay where, with annual rainfall of 400 to 600mm was more akin to much of Australia.

Silvopastoral systems in this region were not as intensive as those seen in Colombia however it addressed the need for a minimum of 40pc of each property to remain with native vegetation.

The three-day Congress provided an interesting mix of speakers from around the world and which included the University of Queensland's Dr Max Shelton and Dr Nahuel Pachas who both spoke on leucaena systems.

Trials of planting leucaena under native trees at Tom Saunders' Whitewater Station, Mount Surprise in North Queensland, was showcased during the presentations.

"The opportunity to see how leucaena can be utilized with native trees was very encouraging," Mr Saunders said.

"How we can now utilize our property is limited by Queensland's land clearing regulations so my wife Christine and I, and others in the same boat as us, need to look at and trial ways to maximize the returns from what we have.

"I really do believe that silvopastoral systems that can be incorporated into our native landscape will be a massive game-changer for us and I am very thankful for this opportunity to be a part of this delegation and to see first-hand the potential and speak with those that are implementing it already."

Sponsored by
Aust now needs to think about growing market share in China, not just regaining ground: Simon Quilty
Test
Opinion: China is not interested in "global order".
Test
The use of drones is roaring upwards according to latest data from DroneDeploy.
Test
It was a bad crash while out mustering on his motorbike which convinced Western District grazier Tom Alston to give drones a go.
Test
Purrumbete homestead is for sale via expressions of interest.
Test
The number of backyard bee enthusiasts has boomed during the coronavirus pandemic.
Test
Regulatory failure, poor management, behind Van Dairy woes.
Test
Specialty food producers fear being cut off from online customers by Australia Post ban.
Test