Cattle market holds up well given the volumes offloaded. 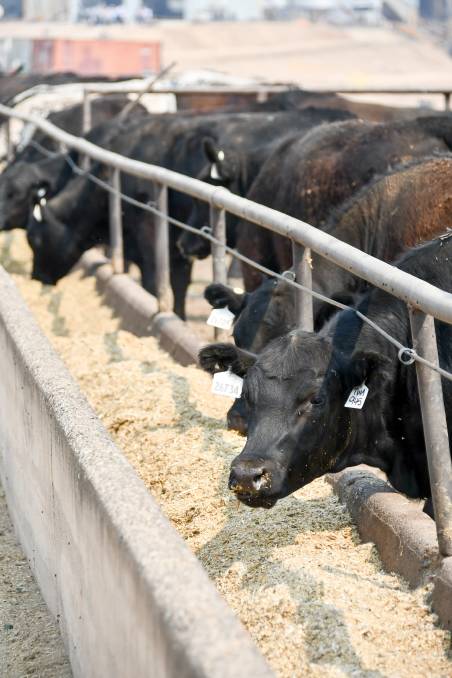 ON FEED: Feeder buyers are accounting for more than half of EYCI-eligible purchases at saleyards at the moment. Photo: Lucy Kinbacher.

FEEDER buyers have paid solid premiums at saleyards in the run-up to Christmas, allowing the cattle market to show resilience against an influx of numbers.

Record yardings in Queensland and northern NSW has pushed the Eastern Young Cattle Indicator down 20 cents a kilogram carcase weight on where it was four weeks ago. It is currently sitting at 495c/kg, which is 30c below where it was this time last year.

SEE ALSO: How drought has shifted the goalposts in cattle

However, analysts and agents say the demand from feedlots has played a big role in offsetting the price pain of such heavy supply.

NSW purchased the largest number of feeder cattle this year, followed by Queensland, then Victoria.

Mr Cheetham said cattle-on-feed numbers would likely remain at historically high levels next year, despite the expected tightening of cattle supply with or without rain.

"This comes down to a number of factors - efficiency in turning off livestock quicker, demand for grain-fed product, the margins in feeder cattle relative to live export markets and also the drive to increase capacity in the lot feeding sector to support production," he said.

The demand from China in the wake of swine fever related protein shortages had seen a particular focus on Australia's non hormone growth promotant grain-fed product, he said.

The big numbers of cattle coming through for sale in northern NSW had started to slip away this week, he said.

Store cows had also sold well to both southern and northern processor orders during the period of high supply, he said.

Rabobank senior analyst Angus Gidley-Baird said grain-fed product was in a very interesting space going into 2020, given the strength of global demand, improved grain prices since the start of the year and limited supply of finished cattle in the system, a legacy of sustained selling off.

There was still room to grow, he said, with licensed feedlot capacity at 1.38m head and the latest cattle-on-feed surveys indicating around 1.14m were currently being fed.

"What feeder cattle are available are likely to be very hot property," he said.

"We suspect the numbers on feed might reflect a mix of cattle at the moment,. Given the strong finished prices, cows are probably going on feed too."

Long-term programs typically not heavily affected by season were continuing and there were big numbers of 100-day and longer cattle on feed but there were definitely some out-of-typical-specification type cattle also being fed at the moment, Mr Camm said.

That highlighted the intrinsic links between Australia's grass and grain-fed systems, he said, where the feedlot model was invaluable to ensuring sustainable management and supply in hard seasons.

Mr Gidley-Baird said the extent of end-of-year offloading was not surprising.

Producers had become more sensitive to the way the season was panning out, he said.

"Where they have fed cattle over summer already once or twice, there is very little appetite to do it again," he said.

Those decisions to bring sales forward will affect supply of the traditional flush of Queensland and northern NSW cattle early in the new year, agents said, although to just what extent is difficult to pinpoint.