A big drop in world MAP and DAP prices over the course of the year is finally filtering through to Australian retail fertiliser prices.

Global MAP and DAP prices are at their lowest point since November 2009 and we're finally seeing a drop in fert values at a retail level.

INTERNATIONAL phosphorus (P) fertiliser prices have hit their lowest values for over a decade in response to increased production and decreased demand.

In spite of a low Australian dollar it means retail prices for mono-ammonium phosphate (MAP) and di-ammonium phosphate (DAP) have dropped to levels in the low to mid $500s a tonne, a quote attractive enough to get farmers interested in ordering new season fertiliser while still completing this year's harvest.

International prices have been falling throughout the course of the calendar year off a peak of around $600/t at the start of the year to $384/t now, however it has only been in the past few weeks that farmers have seen falls in the retail price offered to them.

Andrew Weidemann, Grain Producers Australia (GPA) said in his home state of Victoria the headers were still rolling which meant it was not the traditional time to be contemplating fertiliser purchases but said the prices were sufficiently low to see farmers taking time to place some orders.

"I've heard of a quote of $538/t port which has got farmers interested.

"Through this area there will be solid demand after reasonable yields taking nutrients out and farmers will look to put out generous rates to replenish their soils, but equally we would not expect much more than the bare minimum in the areas that have been hit by drought." 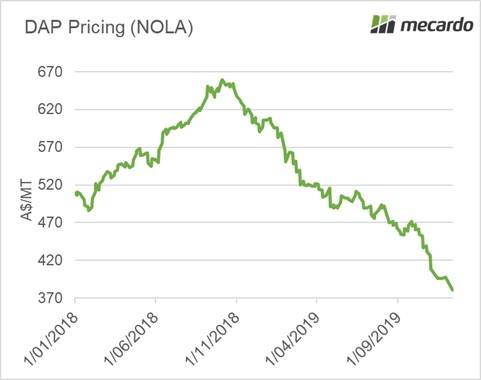 It has been a steady fall for global DAP prices. Source: Mecardo.

Mr Weidemann said some farmers may even take the opportunity to lock away supplies for 2021.

"They could think it is prudent to lock some away but it will depend on their relationships with their suppliers as storing fertiliser on-farm can be tricky, it can easily get hard and difficult to work with if not stored correctly so many people prefer to source directly from the supplier."

Duncan Young, WAFarmers grains section president, said farmers in the west were aware of the opportunities but said seasonal factors were influencing who was buying and who was not.

"Most people are getting at least some of their requirements locked in but for some in the north and east of the cropping belt, following a poor season, fertiliser hasn't been high on their radar," Mr Young said.

He said farmers recognised the value in phosphorus at current levels.

"Looking at historic fertiliser prices we see a lot more risk to the upside than downside on pricing."

Wes Lefroy, Rabobank agricultural analyst, said he expected Australian winter cropping P demand to remain static, in spite of the drought, while the use of nitrogen (N) based fertiliser will drop.

"We've seen this already in the 2018-19 financial year, P use dropped just 0.3 per cent for Australia but urea (the major nitrogen fertiliser) was down around 5pc," Mr Lefroy said.

"I think it will be a similar pattern, P demand is relatively inelastic whereas farmers will use N in a more discretionary way according to how the season is looking."

Internationally, Mr Lefroy said there had been new MAP and DAP production plants come online, especially in the Middle East, while the world was also seeing what China was doing in the space.

"China has ramped up its capabilities and should that product hit the world market it could have an influence on supply and demand."

He also pointed out lower usage in key world markets such as North America, where the wet start to the corn planting season lowered fertiliser usage.

"We've just got that classic situation where supply is exceeding demand and that has meant prices have come back.

"It all contributes to the current situation, where we have the lowest MAP and DAP prices since November, 2009.

Andrew Whitelaw, Mecardo analyst, said the drop in international prices would see cheaper retail values filtering through from now on.

"There has been a fall of $217/t in the global DAP price since the start of the year," Mr Whitelaw said.

"Obviously there are costs to take it into account such as freight and margin, but not withstanding those factors we should be, and we are, starting to see the global market feeding through into local pricing levels.

He said Australian retail fertiliser prices had dropped in the past three weeks, although a lack of price transparency made it difficult to assess to what extent the global decline in prices had been passed on to farmer customers.