The heat this week may cause some concern for the SA cherry harvest, but "reasonable" yields are still expected. 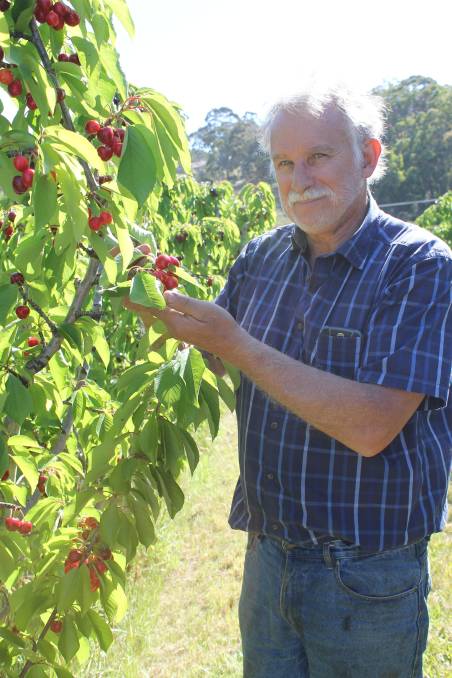 FESTIVE FRUIT: Lenswood grower Peter Green in Simone cherries, which he expects will be ready to pick just after Christmas.

Recent heat may cause some concern for the South Australian cherry harvest, but mild weather through spring has set the sector up for "reasonable" yields, according to Cherry Growers of SA executive officer Susie Green.

Ms Green said the cherry harvest was well under way, slightly later than previous years, but should remain a "relatively normal season".

"There should be plenty of cherries for Christmas," she said.

"The cold spring has resulted in an average set. It won't be a huge crop, but a reasonable one.

"The little bit of rain we had last month would have split a few of the earlier varieties, but what we have seen out there is looking really good."

SA generally produces about 3000 tonnes of cherries a year. This year's harvest is expected to range from 2500-3000t.

Lenswood grower Peter Green, Ellimatta Orchards, said the hot weather this week could cause some fruit to ripen too quickly.

"We may have some get over-ripe, particularly if the nights stay warm as well," he said.

Their family has been farming at Lenswood for about 100 years.

The brothers have been using biodynamic practices for 12 years and organic for the past 12 months.

Peter said not only do they receive a premium for their fruit, but they have cut chemical use and were seeing benefits on-farm.

"Our tree quality and resilience is a lot better than it used to be and on less inputs, particularly water," he said.

"We have noticed that particularly in the past few years, some blocks didn't get watered last summer, but the trees hung in there. They may have to do the same this summer.

"If you have a healthy tree, it also stands up to pests and diseases better."

The Greens also close plant to get more trees/ha and they prefer to keep their trees short, about 2 metres to 2.5m for an easier harvest.

"Shorter trees mean less ladder use for picking, which is safer on our hills," Peter said.

"It also reduces labour because harvest is a lot quicker picking from the ground."

The price of small to mediums has been pretty good lately as supply has been tight. - PETER GREEN

The brothers grow about 20 varieties of cherries, which are sold locally and at the Newcastle, NSW, and Brisbane markets.

Picking started in late November, which Peter said was a couple of days later than normal due to cooler weather. They are now about 20 per cent of the way through harvest.

"Some were not too bad size-wise, some were a bit smaller because of the lack of rain," Peter said.

"But the price of small to mediums has been pretty good lately as supply has been tight.

"This week may hurt a bit though as there is no subsoil moisture left - we will lose a few."

But he still expected an average to good harvest.

"Thankfully the birds have kept away this season," he said.