A south west Queensland grazing family hope a new fodder farm will help them get their remaining stock through the drought.

Surat's McLean family might be in the grip of drought, but they're trying to think long-term when it comes to sustainable feeding systems.

After much research and family discussion, the McLeans have just purchased a hydroponic fodder system for their Merino sheep and beef operation on Wellesley and Elgin Park, 30km south of Surat in southwest Queensland.

The second-hand unit set them back $40,000 but with very little operating spend aside from a small amount of seed, power and water, the McLeans hope to recoup their costs in a matter of months.

The fodder system has two air conditing units set at 21 degrees and is designed to produce 900kg of fodder from 180kg of grain per day.

The system is split into five parts, each with their own door so the operator can open a new section to access that day's feed.

The seed grain is placed directly on trays (without any dirt) and is watered by overhead sprays for 30 seconds every forty minutes. The McLeans say they are still getting the hang of their fodder farm but have been very pleased with the growth of the feed and the response from stock.

Each morning, the feed is simply pulled from the unit to be fed out.

The McLeans are still getting their heads around how the system works and Lachie said it had been interesting to watch the response of the cows and lambs to this new source of feed.

"The lambs have probably never seen green feed so they were a bit unsure, as were the cows," he said.

"They stood back and looked at it for a while but you come down half an hour later and it's all been eaten.

"Because there is no dirt they just pick it up in large pieces and devour it.

"The seed and roots of the feed are the most nutritious part of it." 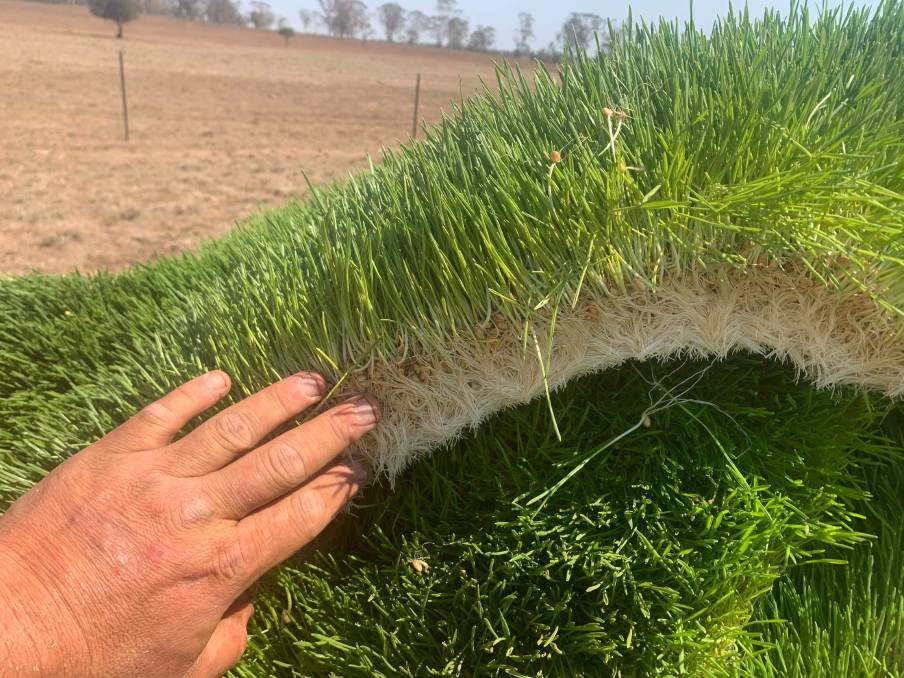 Lachie McLean said the roots of the fodder (wheat is pictured) are highly nutritious.

The McLeans are currently running 300 cows,150 weaners and 360 Merino ewes and lambs across both Wellesley and Elgin Park.

It's the first time the family has run sheep in seven years, with wild dogs forcing them out of wool.

Last year they finished a 26km exclusion fence around the 2025ha Wellesley and purchased 400 scanned in lamb Merino ewes on AuctionsPlus.

"Unfortunately we soon realised that we had fenced in two dingoes and they did a lot of damage in two weeks," Lachie said.

"It was very stressful but we cleaned them up. We've ended up with about 360 ewes."

The McLeans received just 146mm for 2019, well below their average annual of 550mm and have reduced their cow numbers by about 250 head. 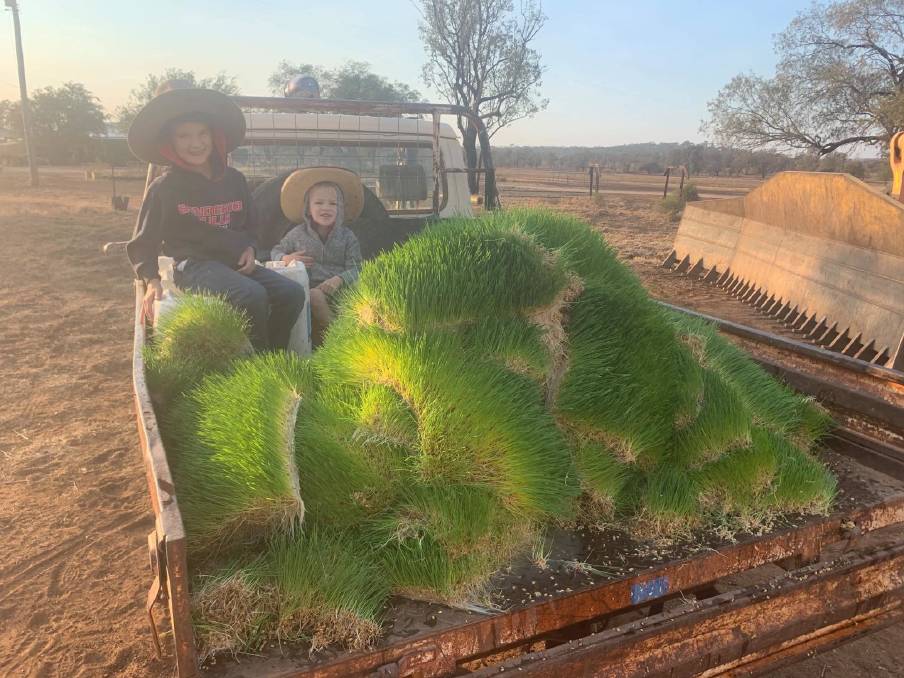 Loaded up and ready to feed out.

Although they have been feeding dry lick for many months, they have only recently started feeding hay on Wellesley, quickly burning through their on-farm stockpile.

They've now early-weaned most of their calves and all their young lambs to give their breeders the best chance while conditions stay dry.

The family operation includes Liz and her recently late husband Bruce, their four children and their families; Richard and Kylie, Lachie and Libby, Katie and Alice and Scott Galagher.

Liz McLean said Bruce was very supportive of purchasing the fodder system and would have loved to have seen it in action.

"He would have been very intrigued with the process and enjoyed getting it up and running very much," Mrs McLean said.

"Richard did a lot of the research and found the unit. Buying it was very much a family decision and Bruce was all for it. It breaks our hearts that he is not here to see the fodder farm in action."

The McLean family is planning to use the fodder for a maintenance ration during the dry times and for fattening stock during normal seasons. 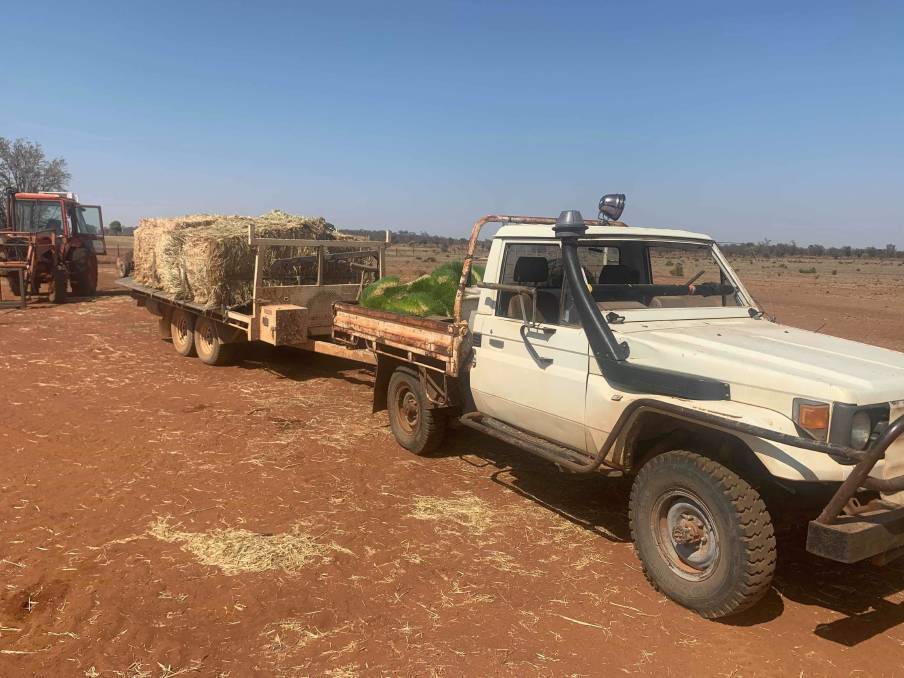 The McLeans say the fodder farm has already taken pressure off other feed stocks.

Lachie said they are using wheat seed they had stored on-farm but have purchased a road train of barley that should arrive mid-January.

"Barley is better to feed than wheat because it is higher protein.

"We are still working out how many sheep or cattle that it will sustain but are currently using it for the young cattle and lambs - to put weight on them and fatten them for market."

The system, which is transportable, requires about two hours of labour per day, which includes feeding out.

The McLeans are using bore water with all run-off going directly onto Liz's garden.

"It actually doesn't use that much water," Lachie said.

"It will impact the power but are unsure how much yet. We will look at adding more solar if we need to." Lachie McLean checking out the progress of tomorrow's feed.

Large scale fodder sheds can cost up to $150,000 and the McLeans say they would consider expanding their own system if it proved successful.

"The next big drought is always coming so we hope this will help ease our feed costs," Lachie said.

"For now we just want to get it running to full capacity, put a roof over it and probably put it on a cement pad.

"We're looking forward to see what it can do.'