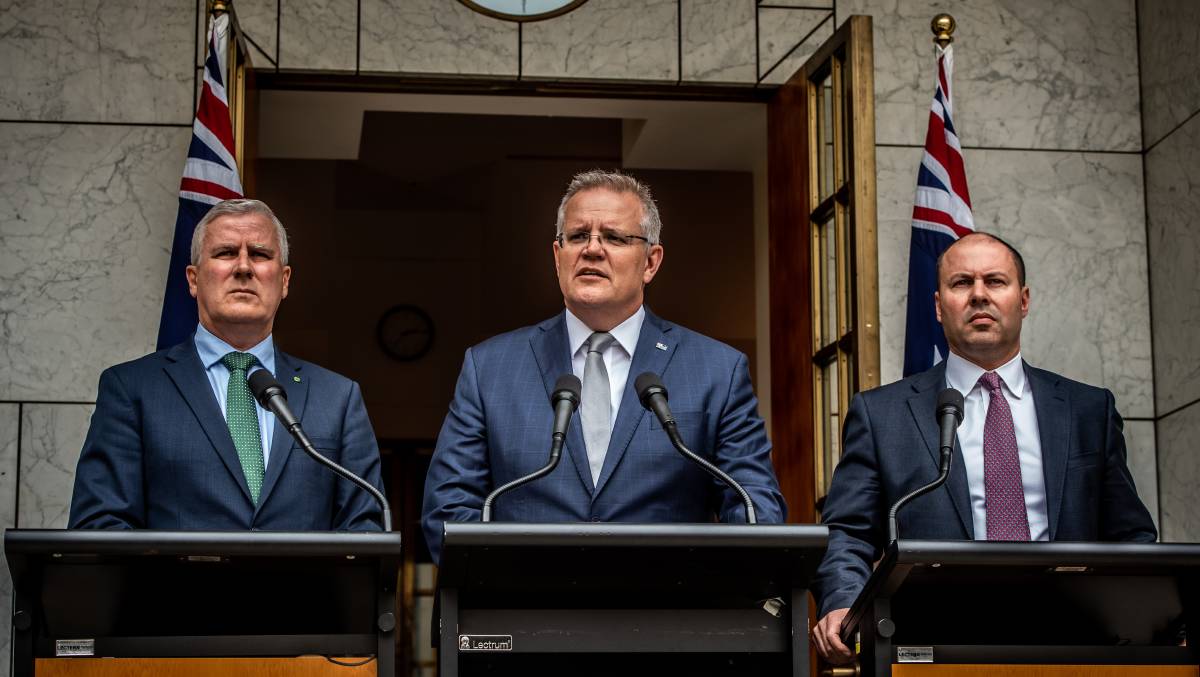 Prime Minister Scott Morrison has dramatically upped his bushfire response for the second time in two days, pledging $2 billion over two years in grants to rebuild towns and farms.

For two months, people on the unemployment benefit will not have to meet their job-search requirements and people with Centrelink debts will not have to make repayments if they live in areas hit by the fires, Mr Morrison said.

Services Australia "pop-up squads" would head into 20 communities with the Defence Force to help people access assistance and grants, he said.

Mr Morrison, perhaps stung by criticism of his response to the bushfire crisis, has rolled out mega announcements since the weekend, after more modest commitments of defence ships and equipment, and compensation for volunteer firefighters.

On Saturday, he announced that up to 3000 army reservists would be compulsorily called up, and helicopters and planes would be diverted to the recovery, as well as new water-bombing planes, on top of the Navy ships already helping.

And on Monday, he announced the new $2 billion fund to be administered by a new National Bushfire Recovery Agency. The agency is in place for an initial two years, and the money is being being spread over three budgets - $500 million in the current budget, then $1 billion, and $500 million in 2021-22.

Treasurer Josh Frydenberg avoided questions on whether the first budget surplus in a decade - forecast this year - would withstand the onslaught of bushfire funding.

The budget was not driving the decisions and it was too early to tell what the full economic impact would be, he said. The spending was not being paid for by savings elsewhere.

"A surplus is never an end it itself. It's all about getting the money to the people who need it," he said.

But economists do not expect the $5 billion surplus to be swallowed up in its entirety, given the conservative assumptions and wriggle room in the recent budget update.

Mr Morrison said the government would do "whatever it takes, whatever it costs" for bushfire recovery.

He said by midday Monday 24 people were confirmed dead: 18 in Victoria, three in NSW and three in South Australia. Another two were still missing in NSW.

On Monday evening, police said another body had been found at 4pm on the South Coast. A 71-year-old man last sighted on New Year's Eve moving equipment on his Nerrigundah property had been reported missing. Police and rescue units had been unable to access the area, inland from Tuross, until Monday, when he had been found between his property and a car, which had both been destroyed by fire. The body was yet to be formally identified, but was believed to be the missing 71-year-old.

Mr Morrison said another 350 people had been evacuated by air from Mallacoota on Monday after the huge naval evacuations on the weekend, with a generator supplied to Mallacoota airport so it could operate again.

There were still 18 communities cut off in Victoria, but all were expected to be reached by the end of Monday.

Teams had been sent to Kangaroo Island to kill injured stock and wildlife, and 100 Commonwealth vets had been set into the field to help farmers deal with injured stock and dispose of carcasses as soon as possible. Horrifying pictures emerged on Sunday from Batlow of animals piled dead by the road.

Details are sketchy about how the new funding will be spent and how it dovetails with the Disaster Recovery Relief program, which is funded by the federal government but spent by the states.

That program distributes money under four categories, all of which require matched state funding. Categories A, B and C cover such things as emergency grants and urgent repairs, fixing roads, schools and other infrastructure, and loans and grants to farmers and businesses.

Category D is for exceptional circumstances without specific criteria, and Mr Morrison indicated this was the category under which the $2 billion had been allocated, except he said this was "D-plus" and would not require matched state funding, presumably because it would be managed by the federal government.

Asked how much would go to grants and projects in the field, a spokesman said the $2 billion would fund the new agency and its activities, and the agency would decide what exactly it would be spent on.

Grants would be made to farmers to restock and replant, to small businesses, and to local governments to pay for infrastructure and other needs. Mental health funding would also be rolled out, he said.

Deputy Prime Minister Michael McCormack referred to the Batlow orchards, which he said had been "incinerated" by the fire and would take at least five years to recover. Pine plantations would take 20, he said.

Asked about the budget impact of Monday's announcement, Deloitte Access Economics partner Chris Richardson said, "A healthy budget is a great thing for exactly this reason - that you don't worry about the cost of doing the right thing at the right moment, and this is the right thing to do.

"The point isn't surplus or deficit. We don't magically go from budget is terrible to budget is Captain America between a dollar in deficit to a dollar in surplus."

This story first appeared in The Canberra Times